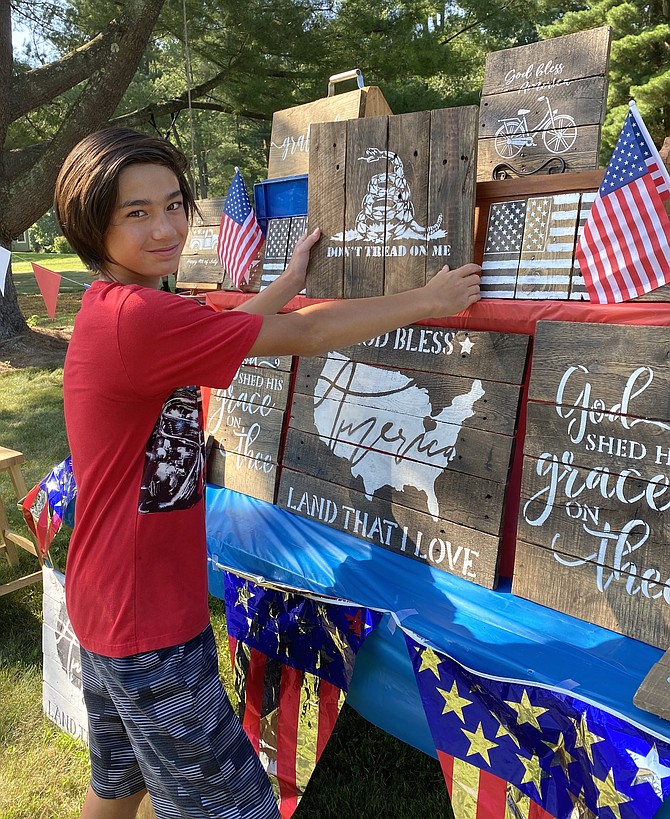 Joey Newton, 13, of Great Falls, owner of ‘Joey’s Wood Signs’ sets up a display table with his handcrafted rustic signs made with reclaimed lumber.

Only thirteen years old, Joey Newton of Great Falls is already an entrepreneur and a savvy one. Newton owns and operates a local business, Joey’s Wood Signs, based in his family’s garage. There, he crafts rustic wood signs made from reclaimed lumber. Newton is conscious of reaching out to professionals for advice, developing healthy business growth strategies and donating a portion of his earned income to charity.

“During these challenging COVID-19 times, I have found a bright silver lining in my son’s determination to make wood signs and start a business. He has proven himself to be a very hardworking young man,” said Jessel Newton, Joey’s mother.

NEWTON’S BUSINESS IDEA began with a challenge put forth a year ago by his mother. Newton said she asked him to craft a rustic wood sign to put over the family piano. She would either pay him to make it or buy one at the store and pay them. Newton said he agreed to attempt to make the sign. Not knowing much of anything about carpentry skills, he turned to a pro, the person who was renovating the family home. Newton learned the hard way. He used basic hand tools, a miter saw and a hammer. “I didn’t have a nail gun or an electric sander,” he said. In search of low-cost or free wood, the renovator came to rescue again and made a suggestion. “We used free pallet wood from stores,” Newton said. Wanting to keep expenditures low by repurposing items he needed for sign production, Newton said he used leftover paint from the house project.

As photos of Newton’s sign reached family, friends and community members, he received orders. Newton realized there was no lack of market need. What started as a challenge turned to the bonafide business. “When I got more money, I got more stencils,” he said. Potomac Falls resident Heath Light bought two signs, one at Christmas and another for the 4th of July. “I love seeing his creativity bloom,” she said.

Given the positive response to his product, Newton’s next logical step was to expand his marketing campaign. “We put it on Facebook Marketplace. They were going well,” he said. Increased product offerings followed. Denise Longo of Weichert Realtors in Great Falls said Newton’s work had “such attention to detail.” “I own several of them then realized what great gifts these would make for new clients… Can’t wait to purchase more of them soon,” she said.

Increased sales brought increased revenue, and Newton’s need to manage his profits appropriately and prioritize. “Ten percent of the money goes to a giving envelope, to an organization called Compassion International…Twenty percent goes back into the business for nails, paint, stain, and stencils…and seventy percent goes into an account for a car in the future,” he said.

GROWTH balanced with smarter work became crucial to the business’ survival to keep up with demand. Newton replaced his hand tools, slower and more tiring, with power tools. Driving nails had proved especially frustrating. Newton said, “I got a nail gun, which was a huge improvement. It was a pain to do every nail by hand.” He switched from road map signs, labor-intensive, to another design. He said, “I’m more focused on signs that say, Home Sweet Home, stuff like that…I could do more of them faster.” Roxanne Hyatt of Great Falls purchased a sign. “I selected a ‘Don’t Tread on Me’…as a gift for Father’s Day… Can’t wait to see his business grow,” she said.

Focused on long-range goals and executing an ordered plan, Newton said he seeks to offer his rustic wood signs in different paint colors and purchase a machine to create custom stencils in the future. He said, “I’ve had people ask me to make family name signs.”

According to Jessel Newton, she and her husband are very proud of Joey. “We are beyond grateful that he has found an outlet for his creativity and perseverance. More so, he is learning how to give and save at a young age, which is a dream for any parent.”