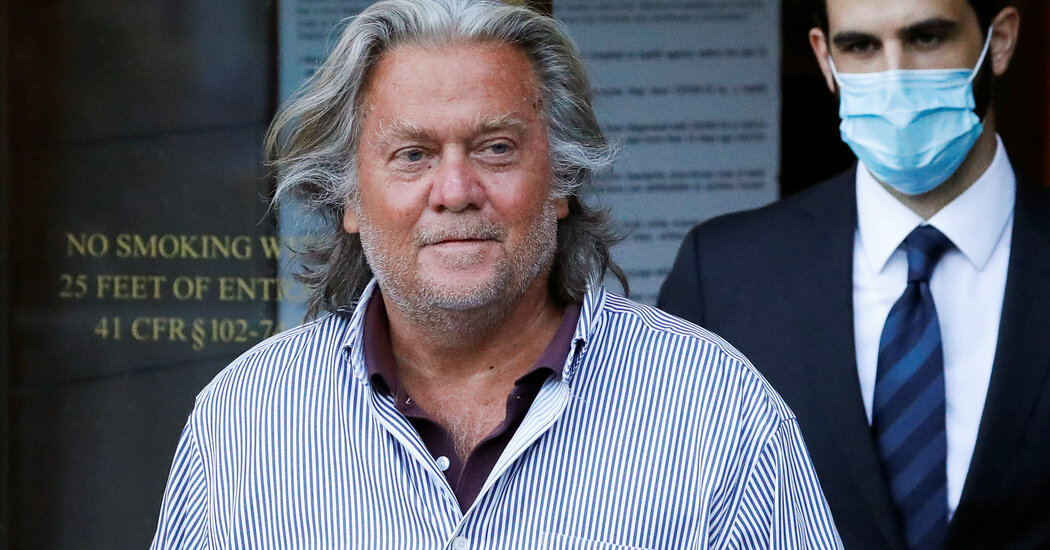 Who are Steve Bannon’s Business Partners?

Want this delivered to your inbox each day? Sign up here.

Steve Bannon, once a Goldman Sachs M.&A. banker, struck gold by investing in “Seinfeld,” before a pivot to politics took him all the way to the White House, as an adviser to President Trump in the early days of his administration. A more recent venture has landed him in trouble: Mr. Bannon was arrested yesterday and charged with defrauding investors in We Build the Wall, a private fund-raising initiative to build a wall along the Mexican border. Mr. Bannon pleaded not guilty and was released on a $5 million bond.

Who else was associated? We Build the Wall’s partners, directors and contractors include some noteworthy names. Three of Mr. Bannon’s business partners in the venture, who were also arrested, had a history of monetizing conservative causes:

We Build the Wall’s board members included:

We Build the Wall’s contractor, Fisher Industries, confirmed to DealBook that it was retained for a 2019 project near El Paso, Texas. Its C.E.O., Tommy Fisher, pitched for private and government contracts tied to Mr. Trump’s wall-building efforts via frequent appearances on conservative news outlets. A Fisher company signed a $400 million deal in December, and the Pentagon’s inspector general began a review of the agreement shortly thereafter.

Mr. Bannon was arrested on a yacht owned by a fugitive Chinese billionaire. The 150-foot yacht was off Westbrook, Conn., when boarded by law enforcement officials. It is owned by Guo Wengui, who is sought by Beijing for extradition from the U.S. Mr. Bannon and Mr. Guo worked together on GTV Media, which is reportedly under investigation over a $300 million private fund-raising round earlier this year.

Postmaster General Louis DeJoy will testify before Congress today. He is expected to defend his three-month tenure to House Democrats worried that changes to the Postal Service will impede voting by mail. The Washington Post reports that Mr. DeJoy is planning an even more sweeping overhaul after the November elections.

Uber and Lyft dodged a bullet in California. A state appeals court gave the ride-hailing companies a reprieve from a Thursday deadline to reclassify their drivers as employees. The companies, which had threatened to suspend ride-hailing operations in the state, will now argue their case before the appeals court in October.

A federal judge said that President Trump must turn over his tax returns. Judge Victor Marrero of the Southern District of New York rejected the president’s effort to block the Manhattan district attorney from obtaining his financial information. The dispute could go to the Supreme Court (again).

Mark Zuckerberg was questioned under oath in a federal antitrust investigation. The Facebook chief sat for multiple days of interviews with the F.T.C. as it examines whether the company broke competition laws. It’s the first known time that regulators have questioned the C.E.O. of a tech giant on antitrust issues.

Fewer than a quarter of states have been approved for supplemental unemployment benefits. As the latest data on jobless claims showed an unexpected rise, the proposal for a $300 weekly supplement — replacing, in part, a $600-per-week program that expired in July — is off to a slow start. States are seeking technical guidance, with some worrying that what’s meant as a stopgap plan will be unworkable in the short term.

The fight over Joe Biden’s economic policy has begun

The former vice president accepted the Democratic presidential nomination last night, pledging, among other things, to get the economy back on track. But Democrats disagree over what that would look like.

He pledged to pay for it all by taxing the rich. “We can pay for these investments by ending loopholes and the president’s $1.3 trillion tax giveaway to the wealthiest 1 percent and the biggest, most profitable corporations, some of which pay no tax at all,” he said. “Because we don’t need a tax code that rewards wealth more than it rewards work.” (An op-ed in Fast Company argues that big businesses would have to work harder to prove their do-gooder bona fides if Mr. Biden became president.)

There’s disagreement over how daring Mr. Biden should be:

• Ted Kaufman, a longtime adviser who replaced Mr. Biden in the Senate and now leads his transition team, told The Wall Street Journal this week that a Biden administration wouldn’t push for big spending initiatives next year. “When we get in, the pantry is going to be bare,” Mr. Kaufman said.

• Progressive Democrats argue that fiscal conservatism is wrongheaded given the economic devastation caused by the pandemic. “We need massive investment in our country or it will fall apart,” Representative Alexandria Ocasio-Cortez tweeted yesterday. “To adopt GOP deficit-hawking now, when millions of lives are at stake, is utterly irresponsible.”

🦠 “It does not seem to be under control in any shape or form.” — Trond Grande, the deputy C.E.O. of Norway’s sovereign wealth fund, on the coronavirus.

🎣 “We think about 25 million Americans would go fishing on a regular basis before February, and that number has now moved to 35 million.” — John Furner, the president of Walmart’s U.S. division, on new pandemic pastimes.

💄 “Wearing masks in many parts of the world … had an impact on lipstick.” — Fabrizio Freda, the C.E.O. of Estée Lauder, to analysts on how moisturizer has replaced lipstick as an affordable indulgence during the recession.

🔨 “Just a robust decking boom.” — Ted Decker, Home Depot’s head of merchandising, on one factor driving a surge in sales during lockdowns.

🛌 “How do you sleep at night?” — CNN’s Anderson Cooper to Mike Lindell, founder of the bedding supplies company MyPillow, during a heated exchange about coronavirus treatments.

From speaker to SPAC

The former House speaker Paul Ryan is reportedly preparing to launch a special purpose acquisition company, The Wall Street Journal reports. The investment fund is aiming to raise $300 million in an I.P.O., with Mr. Ryan, who left Congress last year, as chairman.

He’s not the only famous face joining the SPAC boom. Figures from financiers like Bill Ackman, Dan Loeb and Michael Klein to the famed baseball executive Billy Beane have launched versions of these “blank check” investment vehicles. They have been buoyed by strong equity markets and private companies’ desire to sidestep the traditionally laborious I.P.O. process by merging with these funds, assuming their stock listings.

This SPAC is notable for its Republican ties. In addition to Mr. Ryan’s involvement, the fund’s sponsor is Solamere Capital, an investment firm run by a son of Senator Mitt Romney, who picked Mr. Ryan as his running mate in his 2012 presidential bid.

But its financial adviser has strong Democratic leanings. Mr. Ryan’s SPAC is being underwritten by Evercore, whose founder and senior chairman is Roger Altman, who served in the Carter and Clinton administrations and is a major fund-raiser for Joe Biden.

• Evercore has been strengthening its SPAC expertise, hiring Neil Shah, a specialist in these funds, from Citi last year. The bank has also emphasized its capital-markets business of late: Executives told analysts last month that the firm was coming off its “strongest period ever in equity underwriting.”

Some of the academic research that caught our eye this week, distilled into single sentences:

• When employees are allowed to evaluate their managers, everyone is happier. (Jing Cai and Shing-Yi Wang)

• Maybe crowds aren’t so wise after all. (Ville Satopaa)

Goldman tries to prove it’s cool … with a font

Under David Solomon, the D.J. who moonlights as a titan of Wall Street, the investment bank has tried to shed its uptight image as a haven for besuited M.&A. bankers and chest-thumping traders. That effort now includes its own typeface, The Times reports.

Meet Goldman Sans. The firm describes the font, which is free to download, as “approachable without being whimsical” and “neutral, with a wink.” It was created for Goldman by the British design firm Dalton Maag, with a mandate to create a typeface with just the right amount of personality for the 151-year-old bank.

It follows other efforts by Goldman to come across as cool, including relaxing its dress code, pitching itself as a tech company and collaborating with Apple on a credit card.

The reaction from experts is, shall we say, mixed. They are on record saying that it suffered from “lack of courage,” was “missing life” and was the typographical equivalent of “a casual Friday.”

• Ant Group, the financial affiliate of Alibaba, is reportedly targeting a $225 billion valuation in its forthcoming I.P.O. (Bloomberg)

• Shares in the hotel companies Accor and InterContinental Hotels jumped after the French newspaper Le Figaro reported that Accor has explored a merger of the two. (Reuters)

• Work-sharing programs can save jobs and have support from Congress. So why aren’t they used more often? (NYT)

• President Trump’s efforts to end protections for the undocumented immigrants known as Dreamers are deterring companies from hiring them. (NYT)

• Chinese investors moved more than $50 billion worth of cryptocurrencies out of the country last year amid the trade war and devaluation of the renminbi, according to a new report. (CNBC)

Best of the rest

• “We Just Crossed the Line Debt Hawks Warned Us About for Decades.” (NYT)

• Weekend reading: How Kodak attempted to reboot itself as a drug-manufacturing supplier — and how that effort, supported by a White House adviser, went very wrong. (WSJ)