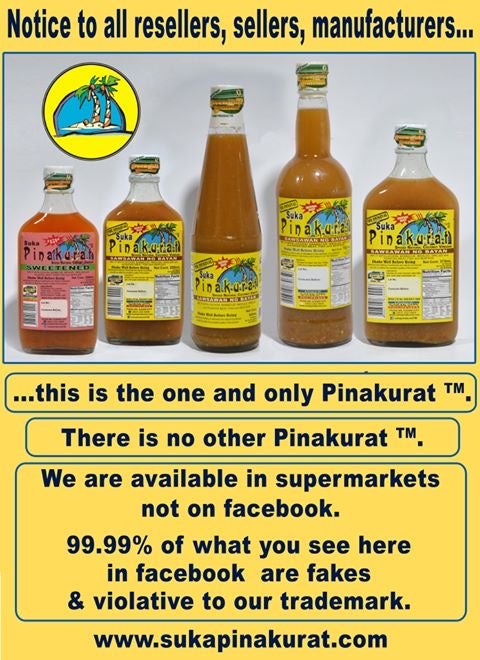 War of the vinegars | Inquirer Business

Imitation is supposed to be the sincerest form of flattery, but the family behind Suka Pinakurat, the beloved spiced vinegar brand, would rather not have it.

After all, it took years of persistence, commitment and passion to elevate their spiced vinegar products into a household name that has been able to hold its own despite the presence of much larger companies in the condiments field.

The Iligan City-based Suka Pinakurat is the brainchild of Rene Jose B. Stuart del Rosario, who created his own special concoction using a base of natural coconut sap vinegar mixed with chillies and other secret ingredients. He was driven to develop the recipe after undergoing an expensive heart bypass that took a large chunk of his family’s financial resources, leaving them with just a little savings on which to build a livelihood to support the family.

Little did he realize then that the dipping sauce would become his family’s legacy.

“As a product, it is called spiced natural coconut sap vinegar (spiced vinegar) or ‘sukang sawsawan.’ Alternatively, as a brand, he called it Suka Pinakurat in 2000,” says Rendo Stuart del Rosario, one of the children of Rene Jose now carrying on the family tradition.

They did not resort to any formal advertising but word of the Suka Pinakurat, inspired by a favorite local dish of the same name, made of chopped wild boar meat generously flavored with vinegar and spices, quickly spread in the community and it soon became synonymous with spiced vinegar and generated a legion of loyal customers who have continued to patronize the brand despite the bevy of choices in the market.

Following their success, the Stuart del Rosario family decided to take measures to protect their brand by making Suka Pinakurat, Waykurat and Kuratsoy registered trademarks at the Philippine Intellectual Property Office in 2004.

Realizing that they hit the home run with their vinegar that the market accepted eagerly, the family needed to protect their products through legal means. Filing a patent required revealing the formula of their products and meant only a 15-20 year protection, while registering for a trademark guarantees protection for 10 years and is extendable for additional 10-year periods. A trademark allows an owner the exclusive legal rights to the use of their registered mark that helps protect their brand identity. 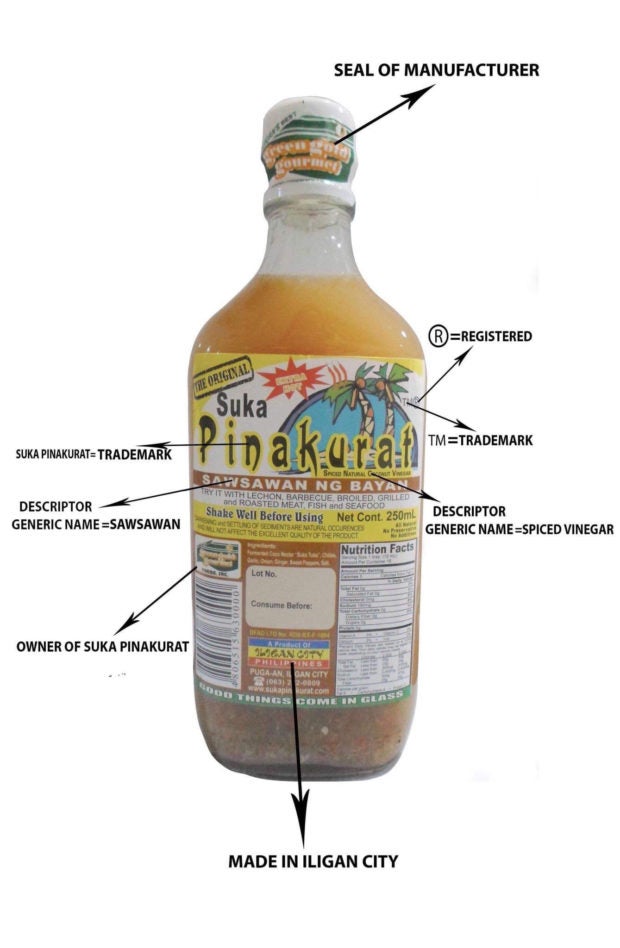 But with traditional advertising absent, many consumers have confused their brand of Suka Pinakurat for just another variant of vinegar.

“Some Filipinos, most especially in non-Cebuano speaking Luzon, think of Pinakurat as a kind of vinegar, an indication of spiciness in vinegar, an ingredient of vinegar, or the process of making vinegar,” Stuart del Rosario admits.

The misconception is brought about by some consumers’ inability to distinguish between the brand name and the product, which can be especially true for widely popular brands. Instructional videos and blog posts found on online media sites are also harbingers of misinformation as most will wrongfully describe Suka Pinakurat as a kind of vinegar.

Unscrupulous manufacturers of spiced vinegar also misuse the trademark of Suka Pinakurat in order to drive their sales and leverage on the success of an already established name. Not only would that affect Suka Pinakurat’s own sales, but would change the image that the brand has built for itself as a high-quality vinegar.

Other spiced vinegars being mistaken for Suka Pinakurat would not have gone through the same quality control that the original does, thus leaving consumers confused about the real taste of the product and furthering the misconception that Suka Pinakurat is a kind of vinegar.

“When home-based manufacturers make their own spiced vinegar product, they start of with a name that sells Pinakurat, or Sukang Pinakurat. To add legitimacy to what they do, they easily obtain the Department of Industry (DTI) business name registration, which they consi­der as a license to do anything in trade. This includes the use of our trademark. It does not help when DTI BNRS (business name registration system) accepts business names involving registered trademarks,” he says.

To date, Stuart del Rosario has called the attention of over 668 labeled spiced vinegar products infringing on their trademark as well as over a hundred people involved in the selling of unbranded spiced vinegar being marketed as Suka Pinakurat.

Labeled products comply while only 75 percent of the nonlabeled ones do, with most of trademark infringement happening in an unregulated environment like social media. The main problem that the brand faces is the black market or online transactions through these social media platforms.

While the Food and Drugs Administration has regulations that are supposed to guarantee the protection of food products being sold online, Stuart del Rosario notes that they are lax when it comes to implementation.

Not one to take these matters lightly, Stuart del Rosario himself has personally provided trademark infringement and food safety notices to all known violators he has come across.

He has also embarked on information drives about his product on different buy-and-sell groups that he is part of and involves the legal system when these illegitimate sellers persist.

Stuart del Rosario points out that the landscape for condiments and sauces is still dominated by food company giant NutriAsia, but that they were able to nurture Suka Pinakurat into a brand leader in the niche market of spiced vinegar.

“We just kept pushing and pushing forward. The market is still very much wide open. To date, demand is outstripping our supply,” he says.

For a business to stay ahead of the game and safeguard the business they built, Stuart del Rosario advises other entrepreneurs to be ingenious. “First you have to be original. You have to create your name, and your goodwill,” he says. He also advises them to register their trademark as early as possible to protect the product name and to constantly keep a watchful eye on the business no matter how established it is, since it is the responsibility of the business owner to enforce the trademark.

“Once registered, it is eternal vigilance. For always success will attract the evil eye, and heavy is the head that wears the crown,” Stuart del Rosario says. —CONTRIBUTED

Don’t miss out on the latest news and information.