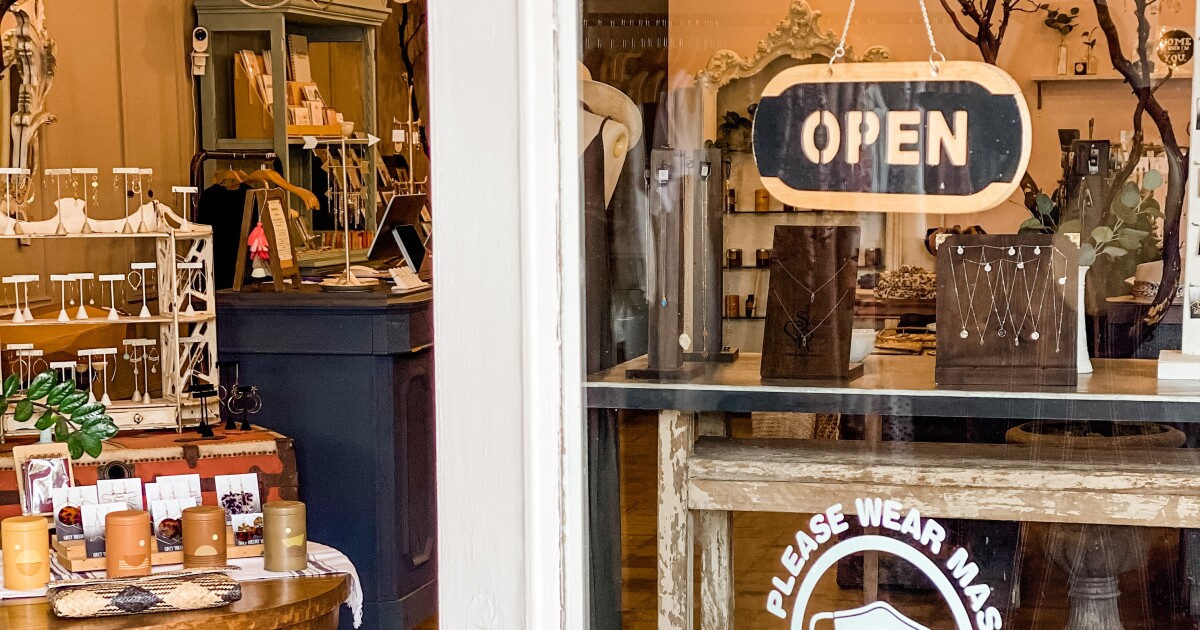 For Chelsea Taylor, owner of the Metaphor Boutique in Vista, the retail trade has always been an “up and down” sort of thing, with one day’s sales different from the next and the ebb and flow of shopping seasons.

But the ups and downs Taylor has experienced since the COVID-19 pandemic arrived have become more extreme, like a hair-raising ride on a never-ending roller-coaster.

“I’m just trying to navigate this part of the adventure,” Taylor said about her 8-year-old women’s clothing and lifestyle shop at 222 E. Broadway. “It’s a little scary. So much is out of our control. We just have to go with it.”

As a small independent retailer, Taylor is among the Vista business owners who have been most impacted by the pandemic this year. Kevin Ham, Vista’s Economic Development Director, said the pandemic has hit some business sectors much harder than others.

Ham said large businesses in Vista have done relatively well over the past six months, because they have the capital to weather a prolonged downturn. And mid-size businesses, at least those with cash reserves and an accountant to apply for emergency grants and loans, have done OK. But small businesses — particularly retailers, restaurants and mom-and-pop shops — have had a tough go of things.

To help these small business owners survive the pandemic, the city has proactively launched a series of initiatives since March that are encapsulated in its 11-page Business Economic Recovery Plan issued July 15. The programs have included the relaxation of sign and outdoor seating ordinances; the establishment of a hot line to connect merchants with resources; online business survival workshops; and free promotional opportunities on the newly launched website: vistaisopen.com.

The city’s outreach efforts have received nearly universal praise from businesses owners, who say that Ham and his team were accessible, open to new ideas and easy to work with. One of the first Vista businesses to reach out to the city for help was Belching Beaver Brewery, which operates two restaurants in Vista, the Tavern and Grill downtown and the Pub 980 in the Vista Industrial Park.

Belching Beaver CEO Tom Vogel said the early weeks of the pandemic were “pretty bad.” The company closed all five of its location and lost most of its income, but for many weeks it kept paying all of its employees, either their full salaries or, later on as the pandemic expanded, the difference between their former salaries and their unemployment check.

“It got really scary,” Vogel said. “Restaurants run day to day. You take the income every day and you spend it every day, but you still owe for all the food you have in the restaurants and the salaries you have to pay from two weeks ago.”

Even before the state’s Alcoholic Beverage Control agency announced plans to loosen onsite alcohol sales and the city allowed restaurants to take their tables outside, the Tavern’s general manager Ralph Lizarraga was drawing up plans for an outdoor dining area in the Tavern’s parking lot. Under a plan approved quickly by the ABC and the city, the lot was fenced off and pop-up “cabana” tents were set up in rows. Combined with the restaurant’s existing back patio, Vogel said the Tavern only lost 20 seats altogether in moving its operations outdoors.

The Tavern also signed a contract with the city of Vista to make and deliver 150 meals a day to needy Vista residents who are at the highest risk of COVID-19. Overall sales at the Tavern are still down 15 percent to 20 percent compared to last year, but Vogel said Lizarraga has already paid off a $150,000 loan from the company to set up its new outdoor space. And the smaller Pub980, which moved all its tables outdoors, as well, is now breaking even, Vogel said.

Since 1990, Jacqueline Koop has run Visions in Art Gallery & Custom Framing in Vista. She does all the sales, customer service and painting restoration. He does the framing and frame restoration. It’s been a good business for the Koops, but the pandemic was a harsh blow they’re still working to overcome.

The warehouse-size shop, with paintings covering virtually every inch of wall space to the ceiling, was closed from mid-March to May 31. But since it reopened June 1, Jacqueline Koop said she and her son have been swamped with work. In June, they both worked seven days a week. She has begun taking some time off but Chris is still there all day, every day fulfilling orders, she said.

“It was extremely exhausting, but it felt so good,” she said. “It was such a shock, we didn’t know what was coming next. But God has blessed us to overflowing.”

Urban Barn Vintage, an eclectic home decor shop at 347 Main St., opened last October. Store buyer and employee Jill Groff said the shop was doing very well before the pandemic hit and shuttered its doors for two-and-a-half months. But since it reopened in June, sales at the shop — which has an older and larger sister store in Escondido — have been strong, Groff said.

“People are limited in what they can do these days so they enjoy coming out and shopping,” she said. “I think because people are home all day, they’re looking around and realizing they want to make some updates. I also think people are shopping now because they worry things will close down again.”

One of the city’s newest small merchants is Brewed Vista, which is the third tenant in three years in the restaurant space formerly occupied by Lush Lounge coffeehouse and Bistro on Main Street. It serves paninis, salads, sandwiches, bagels, toasts, smoothies, gourmet coffees and 15 rotating beers on tap. Owned by Jennifer and Jim Clark, Brewed Vista at 324 Main St. has had a challenging year.

After taking over the space early this year, Jennifer Clark said she and her husband discovered a leaky roof and plumbing problems that delayed their opening for months. They were in the hiring process in mid-March when the county’s shutdown order arrived. They finally opened May 8 for takeout sales and dining at their four outdoor tables, but sales were so low they couldn’t afford to keep the doors open, so they closed July 10.

That’s when an unexpected angel arrived. North County Solutions for Change, a Vista nonprofit that serves homeless families, offered to build for free a raised and shaded dining deck in front of Brewed Vista, more than tripling the venue’s available seating. Brewed Vista reopened for business, Thursdays through Sundays, on Aug. 13, and Clark said business has been growing daily.

Since then, North County Solutions for Change has started on a second patio deck project at Mom’s Kitchen cafe on Hanes Place. Ham said the patio projects, coordinated by Eric Huber of Solutions for Change, are meant to be a neighborly gift to the community from fellow Vistans.

Another way the city is hoping to help small businesses is an acceleration of the final phase of the Paseo Santa Fe corridor redevelopment project. Started in 2015 on a stretch of Santa Fe Avenue between Civic Center and Vista Village drives, the modernization and beautification project should finish up by year-end, rather than early 2021, Ham said.

That’s good news for businesses along Santa Fe that have struggled for five years with construction and road closures. But it’s cold comfort for Roddy Browning, who with his wife, Aaron, opened a restaurant on that stretch of Santa Fe the same year the construction project began. He’s happy it will finally be complete, but wonders why the city didn’t accelerate the construction sooner.

“The last few months have been great in the progress that they’ve made, but it kind of aggravates me, too. Why couldn’t they have moved that quickly before?” he said.

The Brownings had closed TownHall due to slow business earlier this year, then reopened the business in mid-May for patio-only dining. Browning said business has been challenging. Recently, they closed on Mondays and Tuesdays because they weren’t selling enough to cover payroll. They’ve switched up the menu a few times to see what works with customers. And they’re planning to sign up soon for DoorDash and GrubHub to expand their takeout sales.

“We’re not looking to make a profit, we’re just looking for the cash flow,” he said.

TownHall may soon get a fresh influx of walk-up diners when The Rylan, a 126-unit luxury apartment complex, opens a block north at Santa Fe Avenue and Vista Village Drive at the end of September. Prices will range form $2,055 for a studio to $4,055 for a two-bedroom.

The Rylan will open just a month after the city launches a recovery program for residents who are struggling to pay rent. On Aug. 31, the city will unveil a rental assistance program that will provide rent and emergency financial relief through North County Lifeline, Ham said.

Also coming later this summer will be six free city-sponsored workshops designed to help businesses survive the pandemic. Information on those workshops, as well as the links to business resources, incentive programs and the downloadable Business Economic Recovery Plan can be found at cityofvista.com/business/economic-development.

2020-08-23
Previous Post: Arcturus Inks Deal with Israel For Covid-19 Candidate; Analyst Sees 25% Upside
Next Post: Now is the time to start a business in Michigan