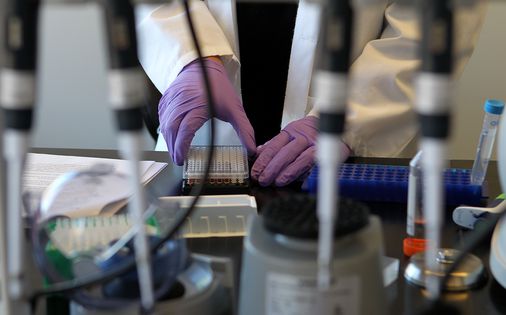 Venture capital is still soaring, but the business is changing

In the first half of the year, according to data from the National Venture Capital Association, VC firms in the United States collected $42.7 billion in what they like to call “dry powder” — money to invest in startups.

The money comes from places like pension funds, university endowments, and wealthy families — all seeking to get better returns than they could from investments like bonds and stocks. If that rate continues for the second half, 2020 would set a record for money poured into venture capital firms. For VC firms that invest in the biotech sector, the second quarter of 2020 has already set a record.

And in Massachusetts, it looks like a pretty good year, in terms of how that money is spent. VCs made about 800 investments last year in Massachusetts companies, and in the first half of 2020, about 400, according to the National Venture Capital Association data. But the amount of money they invest here seems likely to be higher in 2020 by as much as 40 percent, if it continues on the same pace as in the first half, when $8.3 billion went into startups in the state.

Did no one in the venture capital biz hear about the pandemic?

Michael Greeley explains that part of what we’re seeing is a delay between when investors start planning which VC firms they want to put money in, and when those “fund closes” actually happen — industry terminology for finalizing the paperwork and the roster of investors who are giving money to a particular VC firm, which will typically be invested over eight to 12 years. Greeley, a cofounder of Flare Capital Partners in Boston, says that discussions about what to do in 2020 “were happening in the fall, pre-COVID,” and that “2019 venture capital performance was great.”

To earn a significant return these days, argues Michael Skok, a cofounder of the Boston firm Underscore VC, “where do you put your capital? You’re not going to put it in a bank, or invest in a legacy industry like travel or entertainment right now. You want to be putting it into the investors who are going to find the next great technology breakthrough. And guess what? That’s venture capital. It’s the brain-dead, obvious place to be, if you’re investing for the long term.”

But the money in VC is flowing at a greater rate to more-established VC firms that have demonstrated they can crank out home runs, Greeley and others observe. “That’s why you see General Catalyst raising $2.3 billion — the investors are saying, ‘Let’s buy the ones we know,’ ” he says.

In March, Cambridge-based General Catalyst announced it had collected $2.3 billion in fresh capital; in July, one of its investments, the insurance startup Lemonade, had the most successful stock market debut of 2020, its share price rising 139 percent on the first day of trading.

But the pandemic is changing some crucial things about how venture capitalists invest — and how startups use that money to hire — that could affect Massachusetts in worrisome ways.

In pre-COVID times, VCs would bump into each other at breakfast, introduce one another to the entrepreneurs they were dining with, and compare notes on investments in process. That created a dynamic: One Cambridge investor would tell another about a company his or her firm had passed on — but which the other might find interesting — or invite the other to put some money into a promising startup that was raising money.

There was a “center of gravity” effect, with VCs in Boston, San Francisco, or Seattle having the best information about the startups in those cities, and entrepreneurs most often finding it easiest to raise money from the firms where they were based.

Eric Paley of Founder Collective tells me that the main way he’d see Rodriguez, the investor at Matrix Partners, was by bumping into him on the sidewalks of Harvard Square. But that hasn’t happened in the past four months. Now, conversations happen on Zoom instead of street corners.

“My last two investments were in Chicago and Austin,” says Paley, whose Cambridge firm has backed startups such as Uber and Venmo, the payment app now owned by PayPal.

And what does it even mean that a company is based in Boston or Austin now — given that tech companies are increasingly using the venture capital money they raise to hire the best talent they can find, regardless of where it lives? When entrepreneurs talk about hiring, it’s not about hiring great people within a one-hour commute — it’s about how many time zones away it makes sense to hire, so that scheduling meetings doesn’t become a huge headache.

In 2019, says TJ Mahony, many of the most promising founders he met were already deciding to make their companies entirely remote: no HQ, and hires from anywhere.

“My three most recent investments are fully remote,” says Mahony, a partner at Accomplice VC in Boston. One of them, Postscript, which supports text message marketing campaigns for e-commerce sites, has one founder in Denver and others in the Los Angeles area and Phoenix. On the company’s website, every job listed has the same location: “Remote, Anywhere in North America.”

In tech, the future will look a lot like that. A Cambridge startup announcing that it has raised $10 million in venture capital will no longer lead to 50 new high-paying jobs in Cambridge — or all of the office space or Sweetgreen lunches or Somerville apartments that those employees would require.

“We might have just seen the end of these super-node cities, where all of the startups get started — like San Francisco, Boston, LA, Seattle,” Rodriguez says.

In biotech, things might be different. For companies that are running experiments in a lab daily, assessing the results, and deciding what to move forward with, location still feels important. And much of the key talent is already planted in the Boston area.

The vast majority of the companies Atlas Venture has invested in, says partner Bruce Booth, are in the Boston area, including the firm’s most recent deals.

“While we haven’t been face-to-face in recent months, we haven’t changed our strategic or geographic focus during the COVID quarantine. Several of our recent deals” — that is, startups Atlas has backed — “will be incubating with us when we get back into the office.”

When, exactly, will that be?