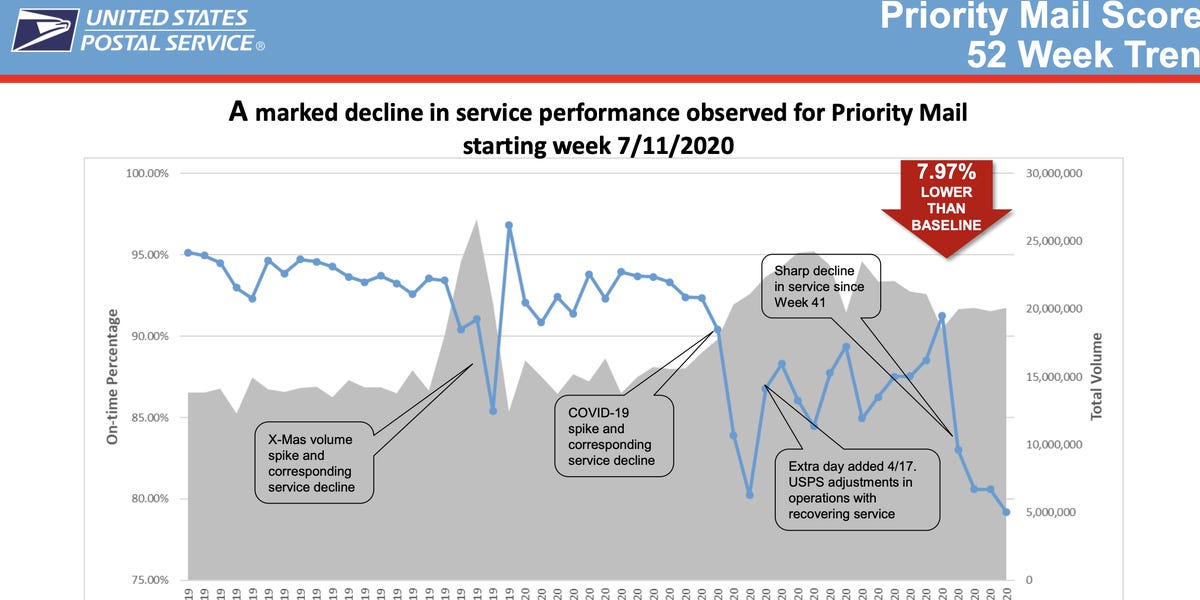 The House Oversight Committee on Saturday released internal USPS documents that reportedly show declines in the performance of the postal service beginning in July, a month after Postmaster General Louis DeJoy took office.

According to the portions of the internal USPS document released by lawmakers, first-class mail service dipped 8.1% below its baseline, marketing mail saw an 8.42% decline from baseline service, the delivery of periodicals saw a 9.57% decline, while priority mail service saw a 7.97% decline compared to its baseline number.

While the graphs indicate service fluctuations due to hardships imposed by the coronavirus pandemic, USPS performance sharply declined in July, a month after DeJoy, a former Republican donor who made contributions to President Trump, assumed his role as postmaster general on June 15.

DeJoy’s cost-cutting measures, such as overtime reductions for postal service workers, have been linked to delays within the USPS that have caused concern over whether it can handle the impending influx of mail-in ballots. In testimony before the US Senate on Friday, DeJoy admitted there had been delays to the postal service.

“We all feel bad about the dip in our service,” he said in Senate testimony, but added that USPS “is fully capable and committed to delivering the nation’s election mail fully and on time,” breaking with Trump who has raised questions about the postal services ability to deal with mail-in ballots.

But Democrats on Saturday said the internal USPS data showed the delays were more severe than DeJoy let on.

“After being confronted on Friday with first-hand reports of delays across the country, the postmaster general finally acknowledged a ‘dip’ in service, but he has never publicly disclosed the full extent of the alarming nationwide delays caused by his actions and described in these new documents,” Carolyn Maloney, chairwoman of the House Oversight Committee, said Saturday.

She added: “To those who still claim there are ‘no delays’ and that these reports are just ‘conspiracy theories,’ I hope this new data causes them to re-think their position and support our urgent legislation today. We have all seen the headlines from every corner of our country, we have read the stories and seen pictures, we have heard directly from our constituents, and these new documents show that the delays are far worse than we were told.”

The House on Saturday is debating a $25 billion USPS bailout, which would also roll back changes instituted by DeJoy and bar the USPS from making further changes until January 2021. As CNN previously reported, the Trump administration has threatened to veto the legislation, and it’s unlikely to be considered in the Republican-led Senate.

‘Are you a member of the media?’: Leaked USPS memos tell employees not to speak to journalists in order to ‘protect its brand’

2020-08-23
Previous Post: How can humankind find a sustainable future in the midst of climate change? This scientist has some ideas.
Next Post: Champions League final preview | Bayern Munich VS Paris St Germain