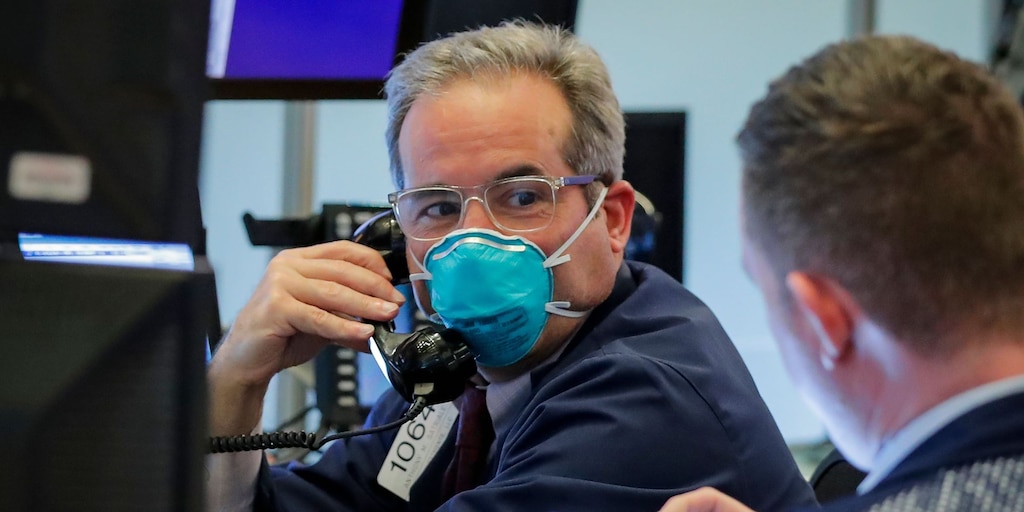 US stocks rose on Thursday as a rally in technology stocks offset disappointing labor-market data.

The gains were driven by some of the market’s biggest companies. Apple rose a day after it became the first US-listed company to reach a $2 trillion market capitalization. Tesla also spiked, surpassing $2,000 per share for the first time.

“The love for technology stocks grew as the favorite pandemic plays,” Edward Moya, a senior market analyst at Oanda, said in a note. “No one wants to short this market, so we are seeing investors just rotate back into technology stocks today.”

Here’s where US indexes stood at the 4 p.m. ET market close on Thursday:

Read more: MORGAN STANLEY: Buy these 22 stocks that are slashing costs as sales take a hit from COVID-19 — putting them in position to smash the market as the economic recovery continues

The tech rally erased losses earlier in the day after the Labor Department said new US weekly jobless claims totaled 1.1 million in the week that ended on Saturday. That was well above the consensus economist estimate of 920,000 compiled by Bloomberg and snapped a two-week streak of declines, signaling a slowdown in the economic recovery.

“This is a temporary setback, as COVID-19 levels are still high but dropping, and re-openings continue, though at a slower pace given COVID-19’s surge in July,” said Robert Frick, a corporate economist at Navy Federal Credit Union. “It underscores the economy is fighting in the trenches with COVID-19.”

“The fact that the Fed appeared reluctant to step up further stimulus efforts imminently, disappointed the bulls who were expecting further clues on the trajectory of monetary policy,” said Hussein Sayed, the chief market strategist at FXTM.

In addition, investors are still awaiting signs that the next round of coronavirus aid will move forward in Washington; Democrats and Republicans remain deadlocked.

Earnings season continued. Shares of Nvidia climbed slightly after reporting blowout earnings that beat expectations, even as the company signaled that its data-center business may see slower growth. Its competitor Intel’s stock gained after it announced an accelerated program to buy back $10 billion of its own stock.

Read more: JPMorgan pinpoints the triggers for a bond sell-off that can cause unusually large losses in everything from stocks to gold — and lays out how to be ready for it

Uber and Lyft each jumped on Thursday, reversing losses, after a California appeals court extended the time that the companies have to comply with an order requiring them to reclassify its drivers as employees. Before the court ruling, Lyft had said it would suspend service in California over the driver-classification order.

Oil fell after OPEC+ and the Fed said the recovery from the pandemic recession was taking longer than anticipated. West Texas Intermediate crude slipped as much as 3.3%, to $41.50 per barrel. Brent crude, the international benchmark, fell 3%, to $44.02 per barrel, at intraday lows.

Read more: Jefferies says buy these 7 back-to-school stocks poised for big returns with much of the US going remote

2020-08-21
Previous Post: How Entrepreneurs Can Scale And Save Money Without Startup Capital
Next Post: IOB posts profit for two quarters in a row