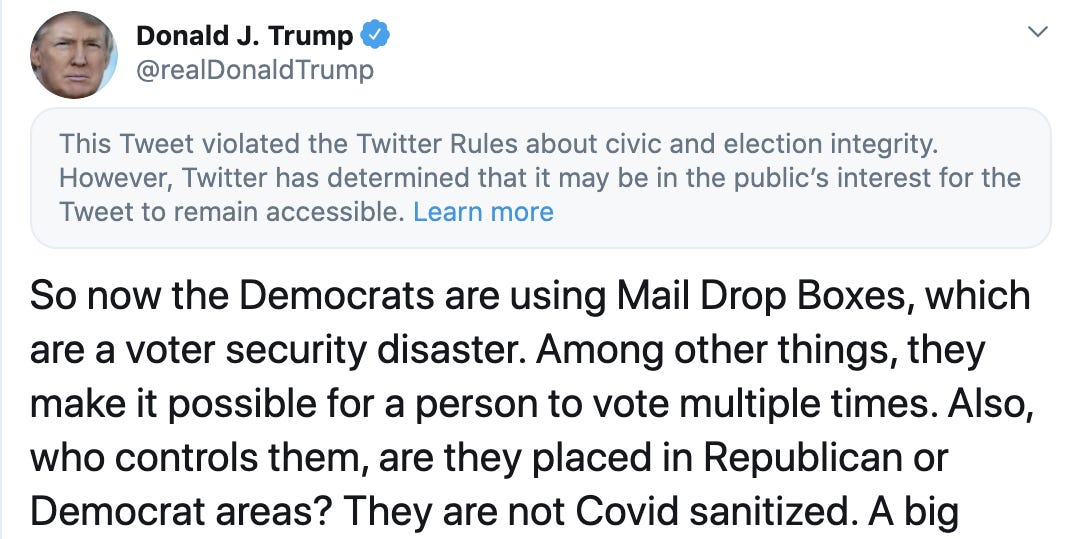 Twitter on Sunday placed a “public interest notice” on a tweet sent by President Donald Trump earlier in the day that claimed without evidence that “Mail Drop Boxes” for ballots would lead to voter fraud and carry a risk of coronavirus transmission.

“So now the Democrats are using Mail Drop Boxes, which are a voter security disaster,” President Donald Trump tweeted just after 7 a.m. Sunday. “Among other things, they make it possible for a person to vote multiple times.

“Also, who controls them, are they placed in Republican or Democrat areas?’ he continued. “They are not Covid sanitized. A big fraud!”

The president has been a staunch opponent of state efforts to expand vote-by-mail to encourage voters to cast a ballot without needing to vote in-person due to the coronavirus pandemic. To assuage voters’ concerns about voting by mail amid the ongoing public crisis facing the postal service, states have expanded locations that allow voters to drop off their ballots rather than sending them via USPS.

“We placed a public interest interstitial on this Tweet for violating our Civic Integrity Policy, for making misleading health claims that could potentially dissuade people from participation in voting,” a Twitter spokesperson told Business Insider. “We’ve taken action given the Tweet violates our Rules, but have kept the Tweet on Twitter because it is important that the public still be able to see the Tweet given its relevance to ongoing matters of public importance.”

There is little evidence to suggest that there is a heightened risk of voter fraud relating to mail-in ballots. According to a report from Reuters, one in four voters voted by mail in the 2016 election. Trump and over 20 people in his administration or who are otherwise close to him have voted or tried to vote by mail in recent elections, Business Insider previously reported.

In June, Trump’s campaign for reelection filed a lawsuit against the state of Pennsylvania to stop it from implementing drop-off locations, arguing state officials had “sacrificed the sanctity of in-person voting at the altar of unmonitored mail-in voting and have exponentially enhanced the threat that fraudulent or otherwise ineligible ballots will be cast and counted in the forthcoming general election,” the Philadelphia Inquirer reported.

In May, Twitter began to place notices over some of Trump’s tweets after years of criticism that the platform did not do enough to combat the president’s misinformation or tweets that otherwise violated Twitter rules. The president and other Republicans have claimed that social media companies, like Twitter, are biased against conservatives.

Days after Twitter began to offer the sporadic fact-checking of his tweets, Trump signed an executive order that empowered federal regulators to amend a statute giving social-media companies, like Twitter and Facebook, the broad authority to moderate speech on their platforms, Business Insider previously reported. First Amendment experts questioned Trump’s authority to regulate or shut down social-media companies that he disagreed with.

2020-08-24
Previous Post: Americans stuck in lockdown are spending on home improvement
Next Post: Corporate Bond and Banking & PSU Debt Funds: Safe options, but not all may fit your bill