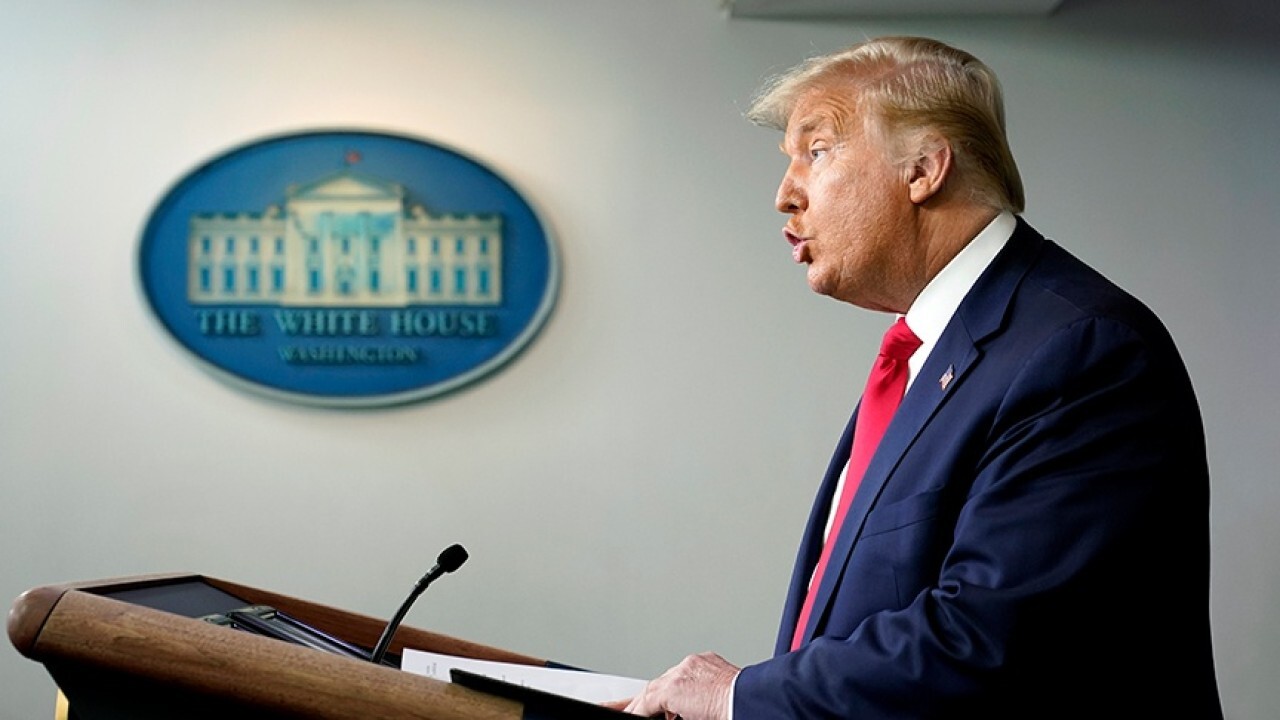 “It’s their fault,” Trump told FOX Business’ “Mornings with Maria.” “They want $3.5 billion for something that’s fraudulent … for the mail-in votes, universal mail-in ballots. They want $25 billion for the post office. They need that money so it can work and they can take these millions and millions of ballots.”

Trump added: “But if they don’t get those two items, then they can’t have mail-in ballots.”

The president went on to slam the practice, saying that ballots have been “sent to dogs” and “dead people,” citing states like Virginia, where he said more than “500,000 phony ballot applications were sent to voters,” and in New York, where mail-in voting caused a weeks-long delay in announcing results for some races in the state’s primary.

Trump added in his Friday briefing that he’d directed Treasury Secretary Steve Mnuchin to ready direct payments, in as much as $3,400 for a family of four “to all Americans,” but said that “Democrats are holding this up.” He said he was ready to send additional Paycheck Protection Program payments, rental assistance payments, $105 billion to assist schools with reopening.

The president even said he was ready to send money to state and local governments, a point of contention between the House and Senate coronavirus relief packages. He assured that “Democrats are holding all of this up.”

But in the same briefing, Trump, who brands himself by his dealmaking, said he would not “sit down with Democrats” and cut a deal because of their demand for $1 trillion in public funding.

“They want $1 trillion to go to their friends doing a bad job running certain cities and states,” the president said.

In May, the House passed the $3.4 trillion HEROES Act and in August the Senate introduced the $1 trillion HEALS act. A key difference between the two bills, other than the pricetag of unemployment extension, is state and local government funding. The Democrats’ bill allocated $1 trillion for state and local public funding and the Republican bill did not account for any.

The $2.2 trillion CARES Act approved in late March allocated $150 billion for state and local governments. The Treasury Department’s inspector general’s office reported in late July that states had spent about one-quarter of that money; however, some state officials said the report did not factor in the money that was already earmarked for spending.

Trump took relief matters into his own hands last Friday, announcing an executive order including various elements of relief under negotiation. His order called for $400 in extended unemployment relief through Dec. 6 or whenever FEMA’s Disaster Relief Fund, used to pay for the extension, dips below $25 billion. In addition, his order directs the federal government to identify funds for those who can’t pay their mortgages, defers payroll taxes and extends student loan relief.

However, state governors have pointed out that the unemployment benefits measure relies on already cash-strapped states to supply 25% of the funds and that it would cost them billions of dollars. Critics also questioned whether the executive orders are even legal, given that Congress has the power of the purse.