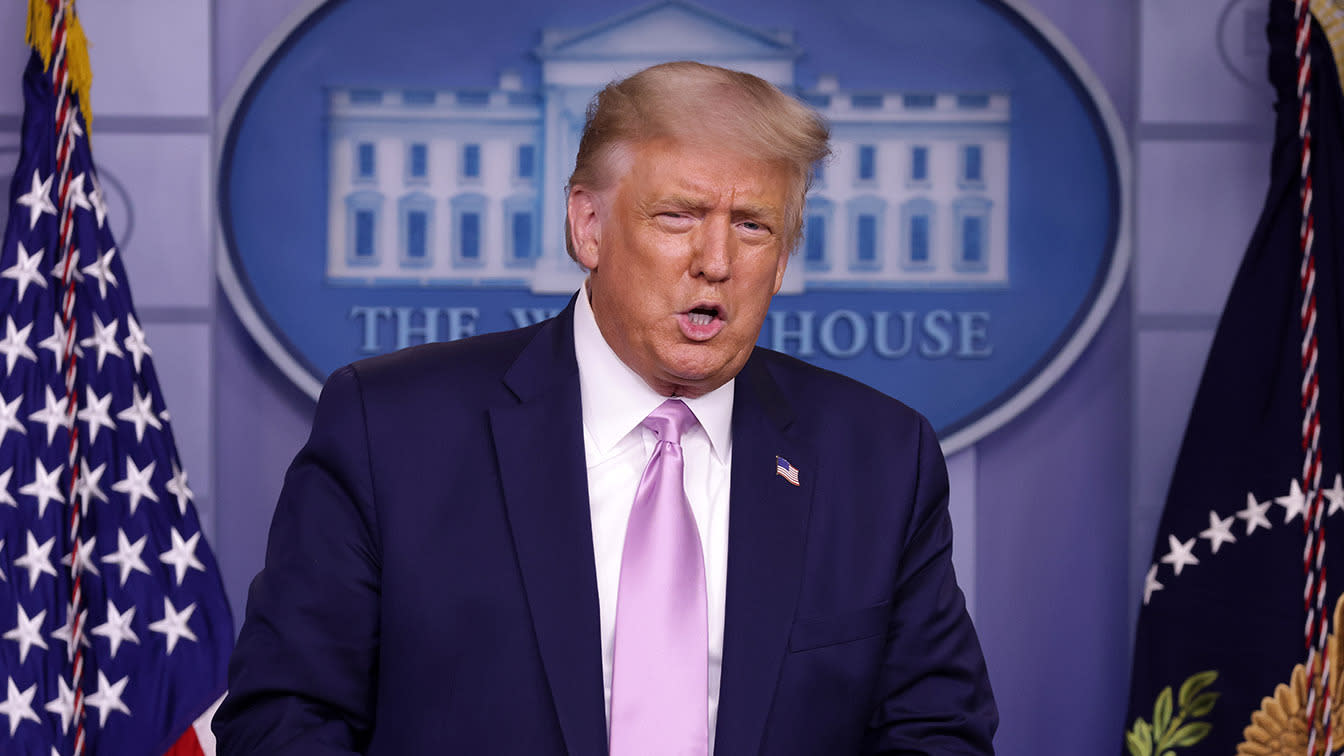 President Trump turned again to racist attacks on Joe Biden’s housing policy Wednesday, with an appeal to “the suburban housewife” that sounds a jarringly out-of-touch note in 2020.

“The ‘suburban housewife” will be voting for me,” wrote Trump on Twitter. “They want safety & are thrilled that I ended the long running program where low income housing would invade their neighborhood. Biden would reinstall it, in a bigger form, with [Sen. Cory] Booker in charge!”

Last month Trump announced he was repealing the Obama-era Affirmatively Furthering Fair Housing rule, which was intended to fight housing discrimination by strengthening implementation of the 1968 Fair Housing Act. The rule itself, which Biden has pledged to reenact, doesn’t mandate land use or rezoning from the federal level, but Trump has portrayed it as a move to bring multiunit housing into neighborhoods of single-family homes, warning that it would lead to an increase in crime. Many studies have shown that to be untrue.

Trump did not explain why he said that Booker, of New Jersey, who is the only Black male Democrat in the Senate, would be in charge of the “invasion.” Trump initially began the racist attacks at the end of July, warning “Suburban Housewives of America” that “Biden will destroy your neighborhood and your American Dream.”

“I am happy to inform all of the people living their Suburban Lifestyle Dream that you will no longer be bothered or financially hurt by having low income housing built in your neighborhood,” wrote Trump on Twitter. “Your housing prices will go up based on the market, and crime will go down. I have rescinded the Obama-Biden AFFH Rule. Enjoy!”

Trump has stated that Biden, his presumptive general election opponent, wants to “abolish the suburbs,” an echo of Richard Nixon’s fearmongering in the 1968 presidential campaign. Trump, who grew up in Queens, N.Y., and has never lived in a suburb as an adult, appears to be tailoring his pitch to a shrinking demographic of white suburban “housewives” frightened of racial minorities from the cities.

Reality does not match that vision. Partially due to an uptick in immigrants, a Pew Research study in 2018 found that a third of suburban dwellers were nonwhite. Suburban poverty is already increasing in many areas, while the “Wall of Moms” who took to the streets of Portland, Ore., and other cities to protect Black Lives Matter demonstrators is at least as representative of today’s suburbs as the iconic “suburban housewife.” While Trump has demonized the Black Lives Matter movement, the suburbs have seen their own protests in support of civil rights and racial equality.

Trump’s popularity has cratered in the suburbs, with an approval rating of just 38 percent. Polls of suburban voters have consistently shown him well behind Biden, sometimes by double digits. Democrats won control of the House of Representatives in 2018 by winning in suburban districts, and they are targeting more Republican incumbents in those areas this cycle.

Although Trump’s attempts to portray Biden as an anarchic force that will destroy the fabric of the nation may yet catch on between now and November, a July poll from Yahoo News and YouGov found that 51 percent of voters thought a second Trump term would make the country less safe, versus just 39 percent who believed the same about a Biden win.

Trump’s attempt to turn the general election race into a culture war is happening as Americans have turned against him over his handling of the coronavirus pandemic, which has claimed the lives of more than 160,000 Americans and resulted in the worst economic quarter on record along with double-digit unemployment. The attacks on minority communities come as they bear the brunt of the virus, with COVID-19 both infecting and killing nonwhites at a higher rate.

2020-08-14
Previous Post: Spotted: Upgraded Google My Business Profile Program
Next Post: Some people will get catch-up payments soon on their stimulus payments