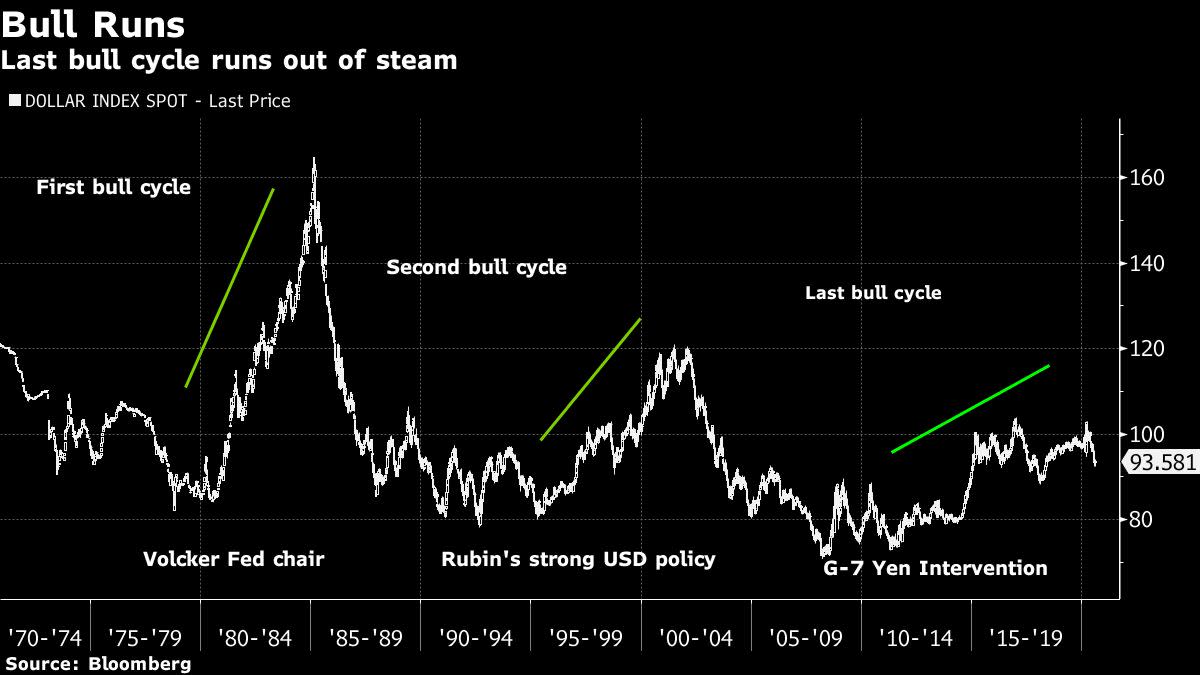 Time Runs Out for Dollar Bulls. Is This Time Different?

(Bloomberg) — The clock is ticking on the dollar’s long-enduring bull cycle.

After nine years of strength, the currency is being assailed from all sides. This year, the Federal Reserve joined other central banks in slashing interest rates to rock-bottom levels, wiping out the dollar’s advantage vis-à-vis the euro and yen. Ballooning debt and deficits have eroded foreign investment in the U.S. And trade-weighted measures suggest the dollar’s decline is overdue.

For the doomsayers, they finally herald the beginning of the end. It’s reminiscent of previous turning points in 1985 and 2002, when abrupt policy shifts upended the dollar and ushered in protracted periods of weakness. Now, a bleaker growth outlook in the U.S. compared with Europe could hasten the reversal. It’s little wonder the greenback has slumped to a two-year low following its worst month in a decade, and traders — on a net basis — are shorting it for the first time in years.

“The dollar has been overvalued for a long time, and this might finally be a catalyst for a multi-year downtrend,” said Brandywine Global Investment Management’s Jack McIntyre. “As we’ve seen before when valuations have been stretched, a policy or economic shock can quickly change the currency’s trajectory and that’s what seems to be happening thanks to the Fed’s swelling balance sheet, a surge in debt, and the way we handled the pandemic.”

Granted, die-hard bears have been sounding alarms about the dollar’s imminent demise for years now, only to be wrong time and again. Whether it’s inflation, America’s twin deficits or the Fed’s easy-money policies, fears over dollar debasement have done little to diminish its standing in the real world.

The currency still accounts for more than 60% of global reserves and is the most widely used for international transactions by far. What’s more, the end of the bull run doesn’t necessarily mean the end of the dollar, according to BNY Mellon Investment Management’s Liz Young.

Nevertheless, a chorus of prognosticators including Goldman Sachs says this time is different, and the greenback’s reckoning has been a long time coming. Climbing 30% from its nadir 12 years ago, it has been the most overvalued major currency based on real effective exchange rates — which take into account countries’ relative trade balances — since 2014, according to the Bank of International Settlements. The dollar is also around 16% stronger versus the euro based on OECD’s purchasing-power-parity data.

History suggests that once triggered, dollar strength could quickly unravel.

The first bull cycle occurred between 1980 and 1985, when the greenback almost doubled in value. But once the world’s richest nations signed the Plaza Accord to depreciate the dollar and help the U.S. pull out of its recession, the dollar soon lost all of that and more.

The second cycle began around 1995 and lasted seven years before ending amid speculation President George W. Bush wanted a weaker currency to boost exports and manufacturing. The greenback went on to slump 33% in the following two years.

“Dollar cycles are long and persistent, and we are now at the top end of valuations,” said Guillermo Felices, head of research and strategy at BNP Paribas Asset Management’s multi-asset group. He predicts a dollar retreat over several years. “Ultimately, relative monetary policy is a key driver. The Fed continues to be the most aggressive and proactive central bank when it comes to policy stimulus, and that is likely to continue to be the case.”

The Fed has committed to keeping rates close to zero for years to come as central bank officials try to mitigate the economic fallout from the pandemic. But its efforts have been hamstrung by the U.S.’s failure to get a grip on the virus, even as countries in Europe and Asia have been more successful in containing its spread.

That’s weighing on the outlook for U.S. growth, which has pushed down long-term government bond yields closer toward the rest of the world and raised expectations for more deficit-inflating stimulus. In a more dire signal for the dollar, inflation-adjusted real yields are now negative, reaching record lows in July.

Wall Street heavyweights including Jeffrey Gundlach and Ray Dalio are among those taking notice. Gundlach said earlier this year his strongest market conviction is a weakening dollar on the back of rising U.S. government and trade deficits and a pullback in foreign investment. Dalio sees U.S.-China tensions resulting in a capital war that will lead to the currency’s decline.

Throw in doubts about the U.S. election and the federal government’s haphazard response to the coronavirus and you’ve got hurricane-force headwinds for the currency at home as well.

Indeed, speculative investors turned net short on the currency in June for the first time in two years. And the options market shows increased demand for wagers against the dollar, with a gauge of one-year risk reversals for the Bloomberg Dollar Spot Index on a firmly bearish trajectory.

Euro calls are trading at a premium to puts across tenors out to a year, a rare phenomenon that’s occurred just two previous times — during March’s turmoil and the financial crisis.

Until earlier this year, those costs were sky high — a product of U.S. short rates being far above those of other countries — and made it unprofitable for many overseas investors to protect against dollar fluctuations. As a result, some foreign insurers and asset managers chose to buy U.S. assets unhedged, buying dollars in the process.

But that hedging expense has evaporated after the Fed slashed rates to near-zero. Foreign investors can now buy dollar assets and hedge back into their local currencies at lower costs, without any benefit for the greenback.

“That hedging aspect is underplayed,” said Tim Graf, EMEA head of macro strategy at State Street Global Markets. “It’s a potential source of a long-term dollar downside. We know foreigners own loads of U.S. equities and bonds and they can now be hedged with very little cost.”