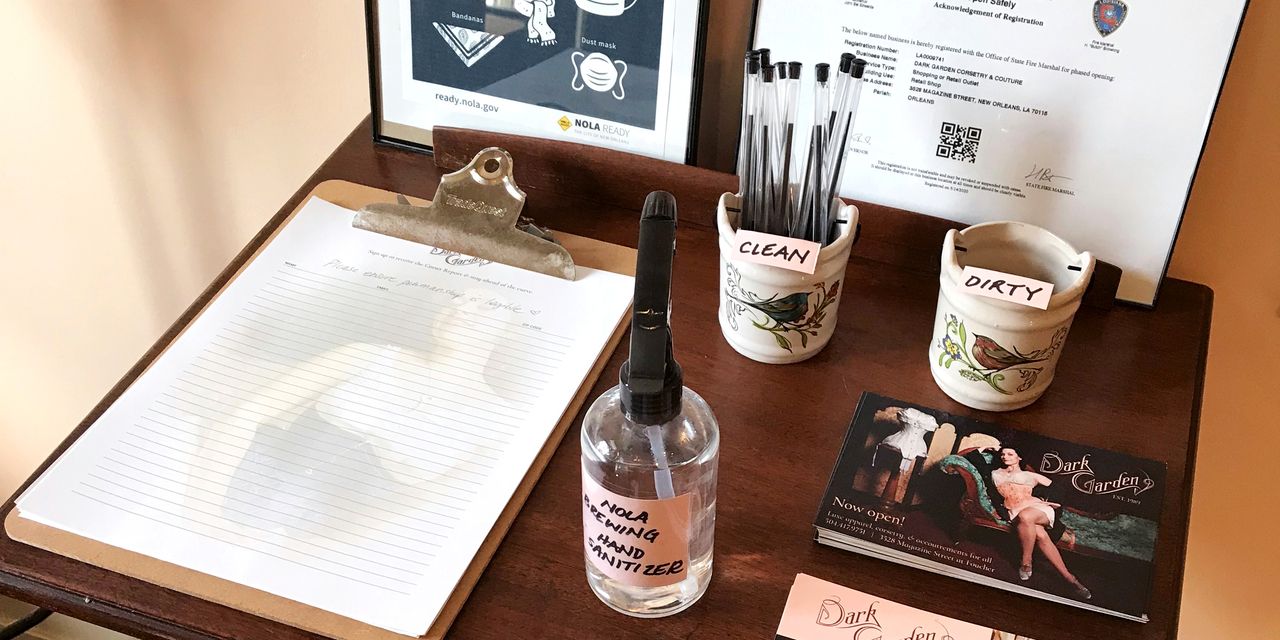 This San Francisco Business Has Been Hit With Covid-19, Wildfires, and a Burglary all at Once

Just when many small retail businesses have been learning to adapt to the restrictions and limitations of the COVID-19 pandemic, in California, another, more frightening assault has arrived with burning wildfires across the state. Dozens of major fires surrounding the Bay Area have led to a thick smog of smoke, ruining the air quality and keeping many people indoors, another hit in the gut for retail shops and restaurants, which are now having to close their outdoor dining areas.

For Autumn Adamme, the owner of corsetry maker Dark Garden, a retail shop in San Francisco’s Hayes Valley neighborhood, the fires are a triple whammy. Earlier this week, in the wee hours of the morning, her shop was broken into, when thieves threw a large rock into a plate glass window, and grabbed as many items as they could, and ran. Fortunately, another longtime San Francisco business, Theisen Glass, worked quickly to replace the plate glass window within hours.

How Autumn Adamme, Owner of Dark Garden, Is Bringing Back Her Business

Corsets and masks are very different garments, but Dark Garden in San Francisco has managed to marry them while dealing with one of the darkest periods in the shop’s long life.

Even so, business is still down about 40%, since Dark Garden relied heavily on in-person events that have been cancelled, from weddings, galas, and unique celebrations such as the Edwardian Ball in San Francisco and Carnevale in Venice. Individual mask-making for COVID-19 has helped her business become an essential business, and now with fires again ruining the air in the Bay Area, Dark Garden may begin selling even more masks, but so far there hasn’t been a spike in mask sales as a result of the fires.

“In the last few days, our sales are pretty much quiet, because people are focused on the news and there is a whole lot of guilt that happens,” Adamme said. “We still have homes, we have to feel bad about that…Even if you ignore the news, there is ash falling from the sky, it’s impossible to ignore.”

After speaking with other small business owners who had negotiated temporarily lowering their rents with their landlords, Adamme spoke with her landlords and received some concessions for both Dark Garden locations in San Francisco and New Orleans.

Adamme said that in New Orleans, her rent was abated for three months and the lease will extend three months longer. Initially, her landlord hoped to extend the lease for six months. “The world is too unknown, I can’t sign up for that,” Adamme said. “In NOLA I have a guarantor. If we fail, it’s not just me it’s affecting, it will also affect my client who agreed to be a guarantor for our lease in New Orleans.”

Online shopping has become even more important. When Dark Garden’s annual in-person rummage sale in mid July — with social distancing and other precautions — did not yield the usual attendees and sales, Adamme and her staff offered another rummage sale on Instagram.

“We did a 4-hour Instagram live, that went over really well,” Adamme said. “There were a lot of people who weren’t willing to come out in person and they felt really included. Two weeks later we did a two hour Instagram live from New Orleans. People said it was so fun and it was so nice to participate in a community… It had a different quality than 2 am
Amazon
shopping. You can ask questions in real time, there is that connection.”

Adamme said they will repeat Instagram Live sales once a month, and see how they fare.

When the shop was robbed, the alarm system did not go off or send any notifications or alerts, and Adamme said it was a neighbor who first notified the police. It took two hours for the San Francisco Police Department to arrive. Fortunately, during the two-hours between the break-in and the arrival of SFPD, nothing else was stolen.

“We did catch them on camera, the people didn’t look homeless, they were not of color,” she said. “I think it was a crime of opportunity because they were not pros, they were super amateur.”

Unlike many businesses in the city and elsewhere, Adamme does not want to board up her shop windows with plywood. In the early days of sheltering in place, when everything was closed and the streets were like a ghost town, Adamme and her beau Daniel and their two cats instead moved to the workshop rooms upstairs.

“When the plywood first started going up, we were taking walks in the morning, it was making me too anxious and depressed,” she said. Thanks to artists working with funds from the “Paint the Void,” initiative, murals have brightened up the plywood for many storefronts all around the city.

Advice to Other Small Business Owners

After the robbery, Adamme said that has been an outpouring of kindness and concern for her business from friends and others in her neighborhood. “It just feels like it could all have been so very much worse,” she said. “That it is something that business owners are facing. If you are not boarded up or have a security gate, the likelihood that you are going to get broken into is high. There are a lot of impoverished, desperate people right now, and because they know the owners are not going to show up, it’s all getting a lot more lawless than it has been for while.”

Retailers and others with store fronts in retail districts should coordinate their business hours during the pandemic, Adamme said, and talking and working together is key.

“If you are a retail brick and mortar, work with other people in your neighborhood if you have to be on limited hours,” she said. “Everyone should be on the same hours, that conserves your resources.” A coordinated effort also helps avoid a lone shopper arriving when all the shops are closed, if everyone can coordinate hours and publicize their district’s shopping hours.

Barron’s in coming months will be exploring how the pandemic’s impact on small business is playing out, and how small businesses’ struggles will affect the broader economy and financial markets. Please reach out to us with your stories, questions, and tips to [email protected]

2020-08-23
Previous Post: Germany’s new ‘Air Force One’ Airbus A350-900 XWB; photos, details
Next Post: Convention will test Trump’s ability to explain away the US economic collapse