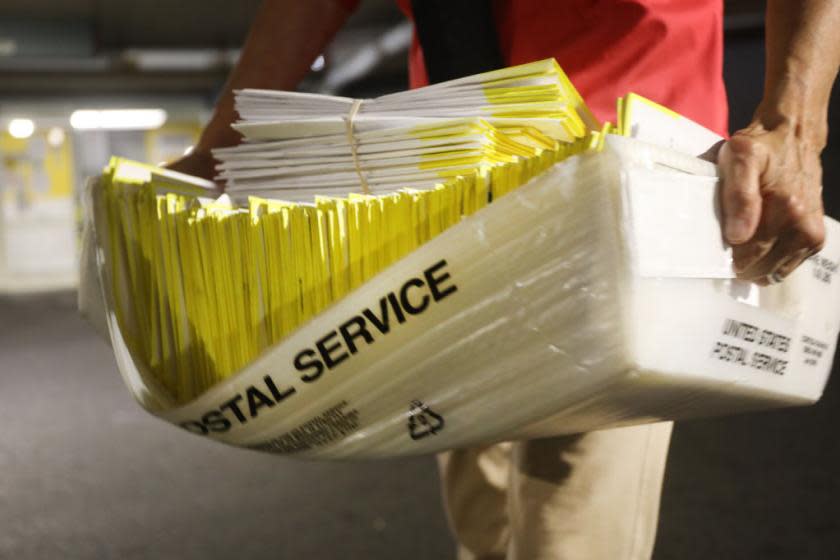 The USPS handles 500 million letters a day at Christmas. Mail-in ballots should be easy.

President Trump said last Thursday he opposes the push by Democrats to give the U.S. Postal Service billions of dollars for the election, telling Fox Business host Maria Bartiromo “they need that money in order for the Post Office to work, to take in these millions and millions of ballots,” and without the funds, “they can’t have universal mail-in voting.”

But despite what Trump says and Democrats say they fear, a lack of money won’t stop the USPS from delivering ballots in a timely matter, according to postal experts and the USPS itself. In the week before Christmas, for example, the USPS processes and delivers 2.5 billion pieces of first-class mail, or about 500 million cards and letters a day, not to mention packages.

“From a sheer numbers perspective, none of the experts I spoke with doubted that the Postal Service could handle a vote-by-mail election, even if every one of the nation’s more than 150 million registered voters stuck their ballot in a mailbox,” Russell Berman writes in The Atlantic. “As one noted to me, a presidential election might be a big deal, but in postal terms, it’s no Christmas.” The experts are worried about measures put in place by new Postmaster General Louis DeJoy.

The disappearing mail-sorting machines and mail collection boxes aren’t the big concern — or even necessarily DeJoy’s doing, Nick Harper explains in a Medium post. The real electoral threat, Berman says, is DeJoy’s rapid moves to eliminate overtime, “even though as many as 40,000 postal workers have been quarantined or out sick because of the coronavirus,” and leave mail behind if it isn’t on the truck on schedule, violating the Postal Service ethos and gumming up the works. The USPS has also said it won’t treat all ballots as first-class mail, as it normally does.

But USPS has been preparing for a surge in mail-in ballots since before DeJoy took over, Berman writes, and besides, “post offices may not follow directives from Washington, D.C., if they believe doing so will tamper with the election. Postal workers are voters too, and for years they’ve been trained to prioritize ballots at election time.” Read more at The Atlantic.

More stories from theweek.com
The culture war in a tuna fish sandwich
Trump wants to take America down with him
John Boehner would ‘rather set himself on fire’ than get involved in the 2020 election

2020-08-17
Previous Post: 8 questions you should ask your boss regularly to advance your career
Next Post: Dallas County home prices soared in July