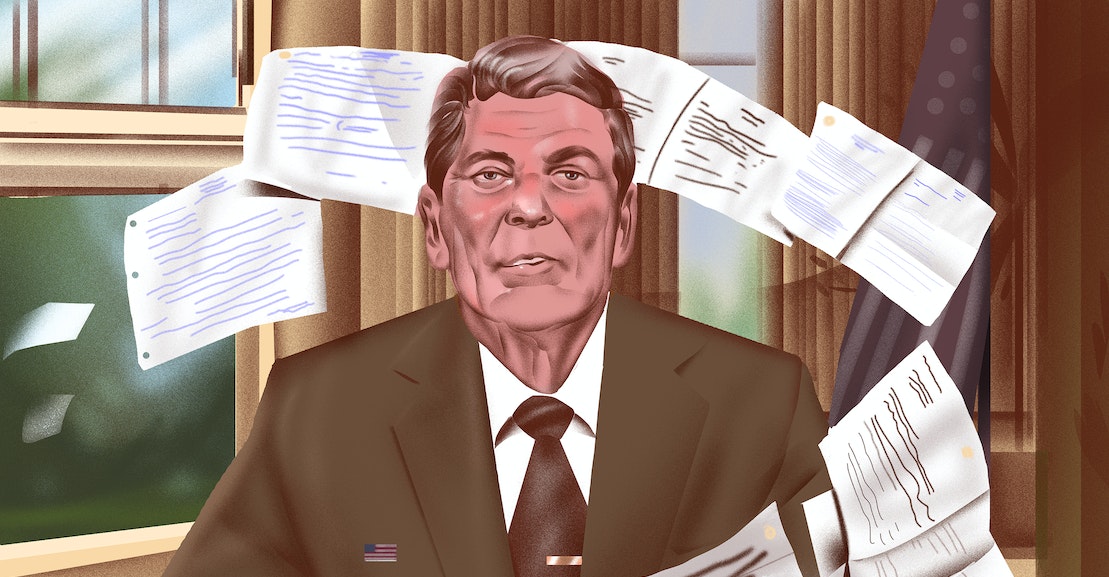 Ronald Reagan began laying the
groundwork for his 1980 presidential run almost immediately after his defeat in
his campaign for the 1976 Republican nomination. The work consisted primarily
of hundreds of speeches in hotel ballrooms across the country. The most
important addressed high-minded fora like the Foreign Policy Association in New
York and the Public Affairs Council in Washington, D.C., from texts carefully
worked over by many hands in order to present the former governor as a dignified
statesman in the broad center of respectable opinion.

The vast majority, however, were stops
on what Reagan termed the “mashed potato circuit.” It was there that, for a
$5,000 fee, Reagan presented the same sort of fantastical anti-big government
parables he’d been offering up to gatherings of trade organizations, civic
clubs, conservative groups, and (for a discount) Republican organizations since
the early 1960s—with plenty of loony Cold War panic stirred in for good
measure. For instance, the time in Palm Beach, Florida, in 1977, when he fantastically
claimed that the Soviet Union had sent 20 million young people into the
countryside to practice reconstructing their society in the event of nuclear
war. The Soviets had supposedly also “dispersed their industry” in preparation
for an ultimatum the Kremlin intended to issue to the United States “as early as next year and at
least by 1981”: Surrender, or face Armageddon. According to Reagan, the Soviets
believed “that if there was such a nuclear exchange, they could destroy us and
we couldn’t destroy them.”

He sounded like Dr. Strangelove.
Which presented quite the dilemma for the Reagan aides who wrote those
statesmanlike speeches, like Peter Hannaford and Michael Deaver—who hoped to
reassure establishment elites that, despite what you might have heard about
Ronald Reagan being a dangerous extremist, he actually was one of them.

By 1978, any number of initiatives
were underway to advance that crucial political goal. One went by the acronym
PTWWT. That stood for “People to Whom We Talk”: a continually updated list distributed
to reporters to reassure them of Reagan’s association with distinguished
foreign policy personages like Henry Kissinger, NATO commander Alexander Haig, and
Harry Rowen of the RAND Corporation.

A related effort was the “SP
Program”: a formal process for staffers to draft letters to opinion leaders for
the governor to “sign personally.”