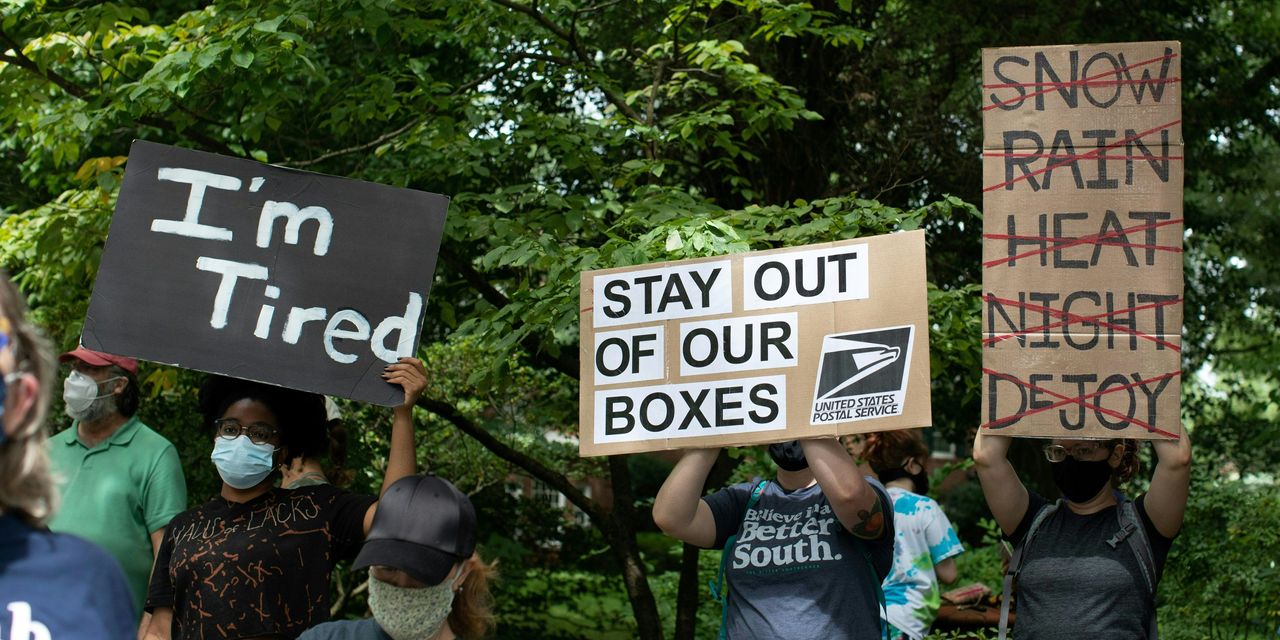 The Post Office Is Always Losing Money. It’s Not Its Fault.

The U.S. Postal Service—an organization older than the nation—is getting more press than it probably wants as a debate about funding and cost cuts heats up.

The Postal Service’s finances, and ability to deliver mail-in ballots for the November election in a timely manner, have clear political implications. Important, publicly traded companies have a lot at stake as well.

The post office, of course, is a household name. Every American has some interaction with the USPS, but that doesn’t mean the current fracas is easy to understand.

Here is what investors need to know, along with some recent history.

Speaker Nancy Pelosi is calling back the House of Representatives from its August recess to vote on a bill blocking some cost cutting at the post office. The reductions, in turn, are part of an effort by Louis DeJoy, the new postmaster general, to stem losses.

The Postal Service lost $2.2 billion in its most recently reported quarter. The volume of mail—letters, rather than parcels—has fallen faster than expected because of the pandemic. Congress allocated $10 billion in funding for the USPS under the Cares Act to help offset the worst effects of the pandemic. More funding as part of a second stimulus is being considered, but the Postal Service has warned that it can’t promise to deliver all mail-in ballots in time to be counted if they are sent near Election Day.

There are four big reasons the Postal Service is less profitable than the logistics companies it competes against.

For starters, there is no reason the post office should make money. It is essentially a federal agency with a universal service mandate. It costs the same to mail a letter to rural America as it does within densely populated cities, but publicly traded logistics companies charge more for deliveries to areas off the beaten track.

Second, the USPS, essentially, doesn’t directly control what it costs to mail a letter. Congress, for instance, rolled back a 2-cent stamp-price increase in 2016 because lawmakers decided the Postal Service had recaptured the sales declines associated with the 2008-2009 financial crisis.

The price of a stamp is a political issue. The price to mail a package via either
FedEx
(ticker: FDX) or
United Parcel Service
(UPS) is simply a question of competition and strategy.

A third critical factor is that around 2006, lawmakers imposed new expenses on the USPS, in part because it was too profitable.

The USPS loses money, but cash flow has been more stable. That is because as mentioned above, the USPS has some unusual expenses, imposed by Congress, that artificially depress earnings.

The requirement hit cash flow until the post office could deal with the expense no longer. Now the Postal Service just records the cost on its books, cutting into the bottom line, but without setting aside any cash.

It’s a heavy burden, but for what? Congress required the Postal Service to prefund its health-care obligations. No other company has to do that, though companies have to prefund pension liabilities, a requirement that became part of the law in the 1970s.

Companies put money into a trust that can continue to pay retirees even if the business goes under. Corporate health-care benefits are paid as they are incurred.

Congress, essentially, decided that the USPS should go a step beyond what corporations do, taking some of its profits and using them to prefund health care as if it was a pension. It’s a claim on USPS’s cash flow that other entities don’t have to address.

Employees, of course, deserve health care. The issue boils down to how the USPS will pay those benefits—as they are incurred, or out of a huge trust built up very quickly by Congressional mandate.

DeJoy ran New Breed Logistics, which was sold to
XPO Logistics
(XPO) for $615 million in 2014. DeJoy then worked at XPO and joined its board of directors. He left the board in 2018.

Has DeJoy donated to the effort to re-elect President Donald Trump? Yes. But his résumé, by Barron’s estimation, qualifies him for the job.

How Big Is the USPS?

The Postal Service is a secret giant, generating about $71 billion in annual sales, including $23 billion in parcel revenue during 2019. UPS had about $76 billion in sales and $46 billion in U.S. package revenue over that span, while the numbers for FedEx are $69 billion and $48 billion.

If the USPS were publicly traded, it would be worth, very roughly, between $50 billion and $70 billion—based on profitability and size. That easily makes it the third-largest non-rail logistics company by value in America.

UPS is valued at about $167 billion, including debt. FedEx is valued at roughly $76 billion. After UPS and FedEx—and excluding railroads—logistics companies quickly get smaller.

Expeditors International of Washington
(EXPD) and
C.H. Robinson Worldwide
(CHRW) are two of the next largest logistics firms, by value. They arrange shipping and don’t own the same networks of assets as UPS and FedEx. They are worth less than $15 billion each.

About 24% of votes were cast using mail-in ballots in 2016, according to the U.S. Election Assistance Commission. That works out to more than 33 million votes nationwide, but the figure is expected to be higher this fall, given the pandemic.

What It All Means for Stocks

Why should investors care? The parcel-shipping industry is an oligopoly: There are a limited numbers of competitors and they all have significant influence on industry dynamics. The USPS’s struggles can help UPS and FedEx if the Postal Service loses market share, or raises prices, as Trump favors.

UPS and FedEx shares are up 37% and 38% year to date, respectively, better than comparable gains of the
Dow Jones Industrial Average
and
S&P 500.
The surge in delivery volume that has come with the pandemic is one key reason. The USPS’s parcel-shipping business is booming too, but its marketing-mail operation is being badly hurt by the downturn.