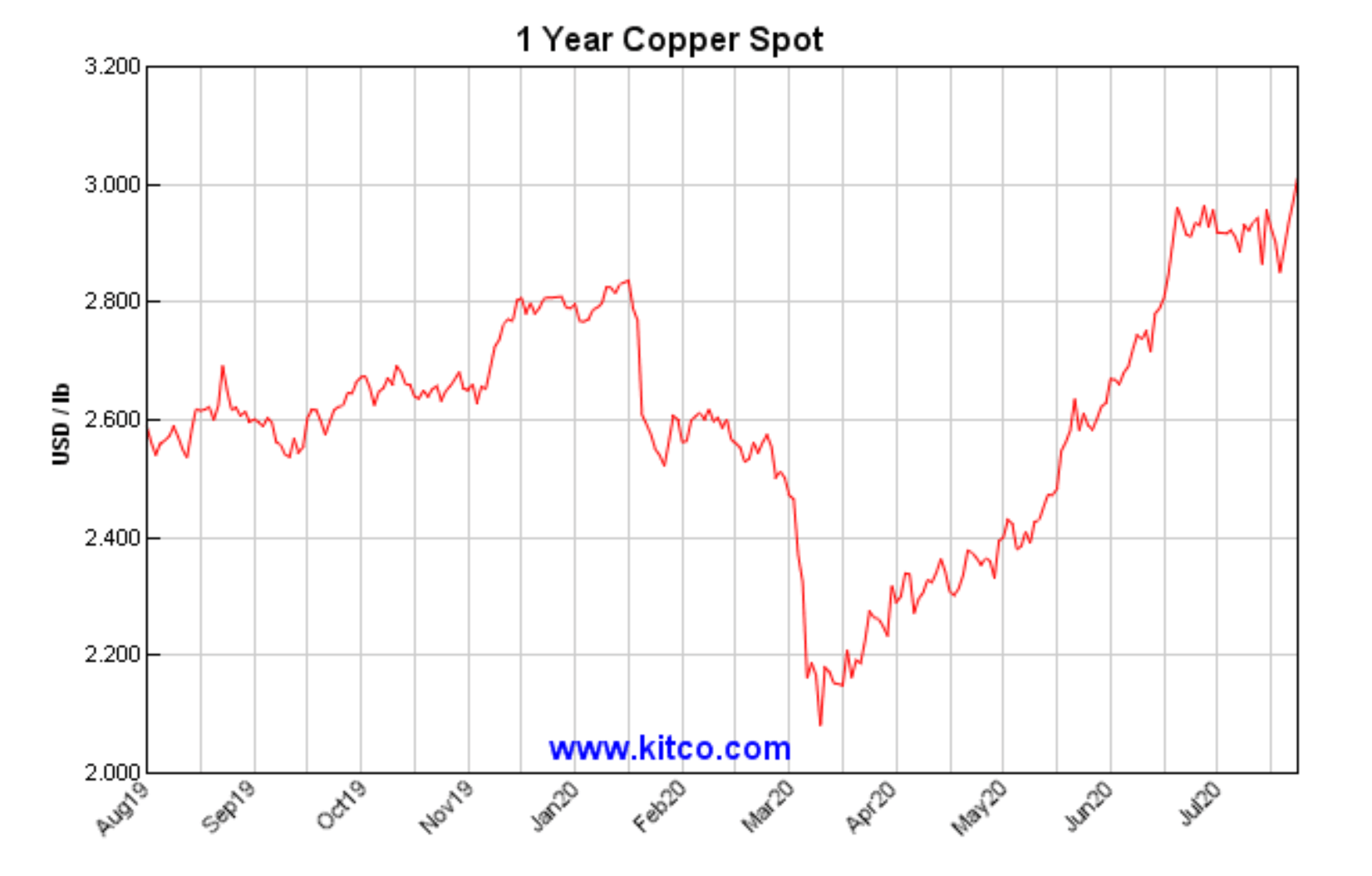 As precious metals continue to be a hot commodity, one of the ways to ride the wave is via Teck Resources (NYSE:TECK). Teck’s slide began much earlier than the rest of the market in early 2020. The stock peaked as the calendar turned and fell about 70% bottoming on March 18th. Since then, the stock has rallied almost 130%. The company remains undervalued with a well-managed balance sheet. The latest breakout is underway as the stock has broken above the 200-day moving average.

All numbers in CAD unless otherwise stated

What Does It Do?

Teck Resources is based out of Vancouver, Canada. The company researches, explores, develops, and produces natural resources in the Asia Pacific, the Americas, and Europe. Teck bases its business on multiple products that include steel-making coal; copper concentrates and refined copper cathodes; refined zinc and zinc concentrates; energy products, such as bitumen; and lead and molybdenum concentrates. It also produces gold, silver, germanium, indium, mercury, and cadmium, as well as chemicals, industrial products, and fertilizers. After reading all this, I am sure you are starting to understand why the stock is breaking out the way it is right now.

What Is Going To Push It Forward?

One of the biggest boosts to any materials company comes when the materials themselves start to do well. Which is exactly the case for Teck. 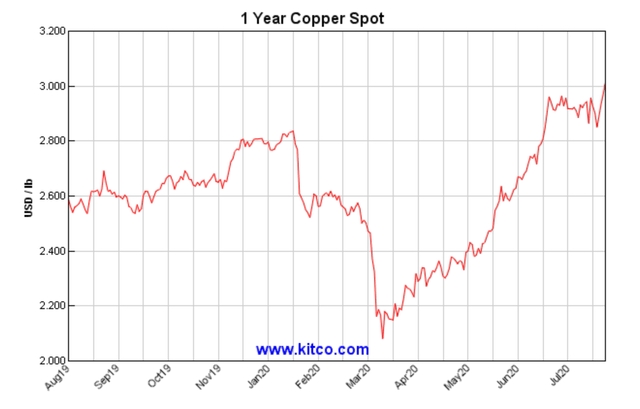 Looking above, you can see copper has recovered. If you look up in the top right corner, you can see that it has recently exploded, which is likely why Teck is getting such a bump right now as well. 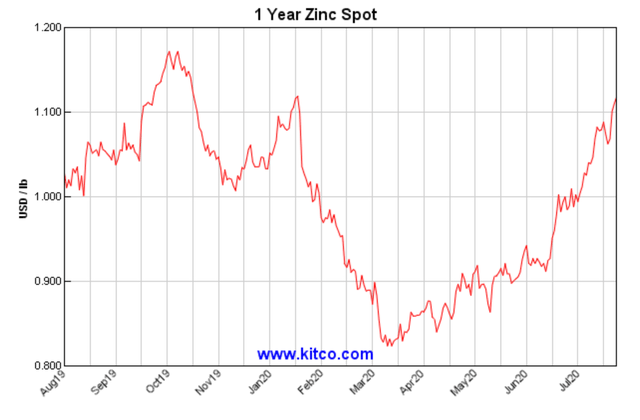 Here, you can see the volatility remains similar with zinc. Again, bottoming in March with everything else and flying all the way back up. Not as nice as a breakout as copper, but right on pace with all the other precious metals. 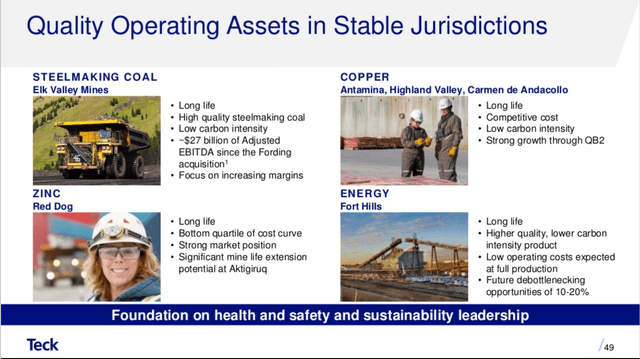 Teck has made significant strides toward cost reduction. Through Q2, there were ~$780 million in operating cost and capital cost reductions. $305 million of which was achieved in Q2. Teck is taking this initiative seriously and doing a great job following through. The reductions include satellite projects, exploration projects, IT systems, and admin and operating costs throughout the company.

Teck has made a big-time commitment to copper. Given the recent breakout, it could not have timed it any better. The Antamina operation is up and running at full production ahead of schedule after being shut down due to COVID-19. The Highland Valley operation is also back up and running at peak production rates. The company has pumped money into the copper side of the business taking cash flow from the steel-making coal and zinc side and moving it to grow the copper side. Looking below, you can see just how much growth it is expecting over the next couple of years. This mixed with continued cost cutting is a formula for success.

As far as the balance sheet goes, it is sitting pretty. As of the Q2 announcement on July 22nd, the company had $6.9 billion of liquidity, including $430 million in cash. It also has access to US$5.0 billion available through two committed revolving credit facilities. Of note, neither facility has a cash-flow based financial covenant, credit rating trigger, or general material adverse effect borrowing condition clause. The current debt-to-equity ratio is sitting around 29%, which is fairly good considering where we are in the world. It is even better considering Teck was as high as 48% over the last five years.

If you have read any of my previous work, you will know that I don’t love dividend companies that rely on commodity prices. UNLESS… they manage the dividend fairly well and aren’t afraid to cut it. Teck fits into this category. The dividend is anything but stable and is definitely not substantial. But this should be expected owning a resource company that pays out a dividend. The volatility in its distribution year to year can be seen below.

As mentioned above, the company is currently unprofitable. This automatically makes the payout ratio negative, and essentially useless to talk about. But as I did speak on, that will turn around in the next year. Looking forward based on projections, the payout ratio will be under 20% in three years which is extremely manageable.

I do not think the company will cut the dividend any further unless the commodity prices cripple them to a point where they will be unprofitable for multiple years. But if that’s the case, you should be out of the stock as the share price would likely tank further than we saw this March, and it shouldn’t matter.

What Does The Price Say?

One of the biggest buy signals out there is the cross of the 200-day moving average. Which we saw on Wednesday in a big way. The stock ran up over 7% on no news and blew through the 200-day moving average. The stock has been held captive by the average for over a year now and has had multiple failed breakouts as shown below. This looks to be the move that sets the stock free.

Zooming in a bit, we can also see that the stock has behaved really well against the 50-day moving average. The multiple tight retests since gaining its support in May are also very bullish. The next thing I will look for is the 50-day to cross the 200-day. This stock is looking really good as it sits right now. A follow-through day on Thursday would officially confirm the breakout.

As for what I am expecting out of the stock, my short-term target price is set at $14.45 where we can see some previous support that will likely turn into resistance. Beyond that, we are fairly free and clear heading towards $18. As for a stop, I am using $9.61. This is a large stop, which I don’t love (24%), but it is pretty well where you have to go without worrying about being a weak hand. The risk-reward is a little less than ideal. Because of this, I would likely look at selling half of my position if the stock crossed below the $11 mark simply to protect capital. If there was a strong bounce off my stop I would consider re-adding at a lower cost.

As you can see, Teck is in a very good spot at the moment both fundamentally and technically. The company has diversified itself across multiple commodities and it is focusing on copper at the right time as it is breaking out. Copper inventories remain at lows, which will drive the price up in the short term. Where we go from there is yet to be seen, but that in itself is enough to give Teck a bit of a boost. The balance sheet remains solid as well. All of this while the stock is breaking out makes for a good story. Let’s hope it plays out. Stay safe out there!

Disclosure: I am/we are long TECK. I wrote this article myself, and it expresses my own opinions. I am not receiving compensation for it (other than from Seeking Alpha). I have no business relationship with any company whose stock is mentioned in this article.