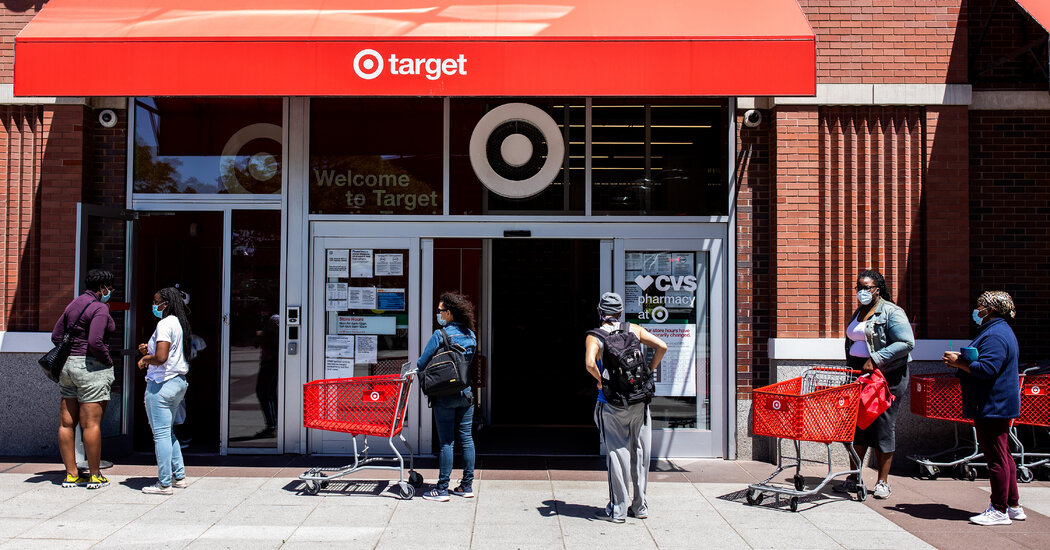 Target said on Wednesday that its profits surged to nearly $1.7 billion in the three months through Aug. 1, an increase of about 80 percent from the same time a year earlier, as people continued to turn to big-box retailers for supplies during the coronavirus lockdowns.

The earnings growth came as sales rose nearly 25 percent, in part as online sales nearly tripled from the previous year, the company said in a statement.

Same-store sales (from stores that were open both this year and last) increased nearly 11 percent, while same-day services, including order pick up and drive up, grew by 273 percent.

Target was designated as an essential service, allowing its stores to remain open while some competitors were forced to closed. The company said its “comparable sales” growth of 24.3 percent was the biggest increase ever reported.

The company’s shares rose more than 12 percent on Wednesday.

It took Apple 42 years to reach $1 trillion in value. It took it just two more years to get to $2 trillion.

Even more stunning: All of Apple’s second $1 trillion came in the past 21 weeks, while the global economy shrank faster than ever before in the coronavirus pandemic.

It took Apple 42 years to reach $1 trillion in value. It took it just two more years to get to $2 trillion.

Even more stunning: All of Apple’s second $1 trillion was added in the past 21 weeks, while the global economy shrank faster than ever before in the coronavirus pandemic.

On Wednesday Apple became the first U.S. company to hit that valuation when its shares climbed in early trading. It was another milestone for the maker of iPhones, Mac computers and Apple Watches, cementing its title as the world’s most valuable public company and punctuating how the pandemic has been a bonanza for the tech giants.

As recently as mid-March, Apple’s value was under $1 trillion after the stock market plunged over fears of the coronavirus. On March 23, the stock market’s nadir this year, the Federal Reserve announced aggressive new measures to calm investors. Since then, the stock market — and particularly the stocks of Apple, Microsoft, Amazon, Alphabet and Facebook — largely soared, with the S&P 500 hitting a new high on Tuesday.

As the economy contracts and many companies struggle to survive, America’s biggest tech companies are being lifted to new heights, putting the industry in a position to dominate business in a way unseen since the days of railroads.

A rally in technology stocks elevated the S&P 500 index to a record high on Tuesday even as the pandemic crushes the broader economy. The stocks of Apple, Amazon, Alphabet, Microsoft and Facebook, the five largest publicly traded companies in the United States, rose 37 percent in the first seven months this year, while all the other stocks in the S&P 500 fell a combined 6 percent, according to Credit Suisse.

Those five companies now constitute 20 percent of the stock market’s total worth, a level not seen from a single industry in at least 70 years. Apple’s stock market value, the highest of the bunch, is nearly $2 trillion — double what it was just 21 weeks ago.

The tech companies’ dominance of the stock market is propelled by their unprecedented reach into our lives, shaping how we work, communicate, shop and relax. That has only deepened during the pandemic, and as people shop more frequently on Amazon, click on a Google or Facebook ad or pay up for an iPhone, the companies receive a greater share of spending in the economy and earn ever larger profits.

“Covid was the perfect positive storm for these guys,” said Thomas Philippon, a professor of finance at New York University.

Strict lockdowns ended weeks ago, but many people across the country are still avoiding malls, restaurants and other businesses. The shift in behavior points to a reshaping of American commerce, fueling questions about the strength and speed of the economic recovery as the coronavirus continues to spread.

Through the end of last week, daily visits to businesses were down 20 percent from last year, according to a New York Times analysis of foot traffic data from the smartphones of more than 15 million people. After an initial plunge in the spring, consumer habits have been slow to recover, the data shows.

Visits to businesses have, for example, rebounded more in Alabama, a largely conservative state, than in the more liberal Vermont. But in comparison with last year, people in Vermont have been shopping again more than people in California, where the virus remains a greater threat. Everywhere, trips to pharmacies and hospitals have fallen, while those to gas stations and convenience stores have held steady or even increased.

How people spend will determine which companies survive, and who ultimately keep their jobs. Continued weakness at brick-and-mortar stores has enormous implications for an economy that has had years of gains wiped away in the months since the pandemic hit. The disparities in how people shop hint at a prolonged, uncertain and uneven recovery.

Gov. Kay Ivey of Alabama made a daring educational decision in June: She would fund a statewide student testing and technology program to help public universities and colleges reopen for in-person classes.

Now, as Alabama college students start those classes this week and next even as local virus rates remain high, that program — one of the nation’s largest campus reopening efforts — is facing the ultimate test.

The sweeping endeavor, led by the state’s public health department, along with the University of Alabama at Birmingham, a leading academic medical center, focuses on testing more than 160,000 students for the virus before they arrive at 59 local colleges and universities. The students must also wear masks and follow social-distancing guidelines, and many will be required to use a daily symptom-checking app developed by U.A.B. On Monday, the university released a second app, which can alert students to possible virus exposures.

But even university leaders acknowledge the effort is a high stakes experiment that could set off new outbreaks in a state with one of the nation’s highest per capita infection rates.

“We can’t remove all risk,” said Dr. Selwyn M. Vickers, dean of the U.A.B. School of Medicine, “but what we do want to do is mitigate risk in a major way.”

Many other colleges are depending on third-party virus-testing and symptom-checking services, but Alabama is largely relying on testing methods and technology built within the state, at the University of Alabama at Birmingham.

Alabama hopes its statewide experiment could help answer one of the most pressing questions about reopening colleges — and the country: Can a combination of aggressive testing, virus safety apps, mandatory mask-wearing and reduced classroom occupancy make it safe enough for on-campus learning?

“It’s this comprehensive plan that gives us confidence,” said Dr. Ray L. Watts, the president of U.A.B. “If there is a flare-up, a small one somewhere, we can find it early and we can quarantine, treat and reduce the exposure to others.”

2020-08-19
Previous Post: Morrisons customers will now be able to do their entire weekly food shop on Amazon’s website
Next Post: How COVID-19 cratered customer acquisition, profitability