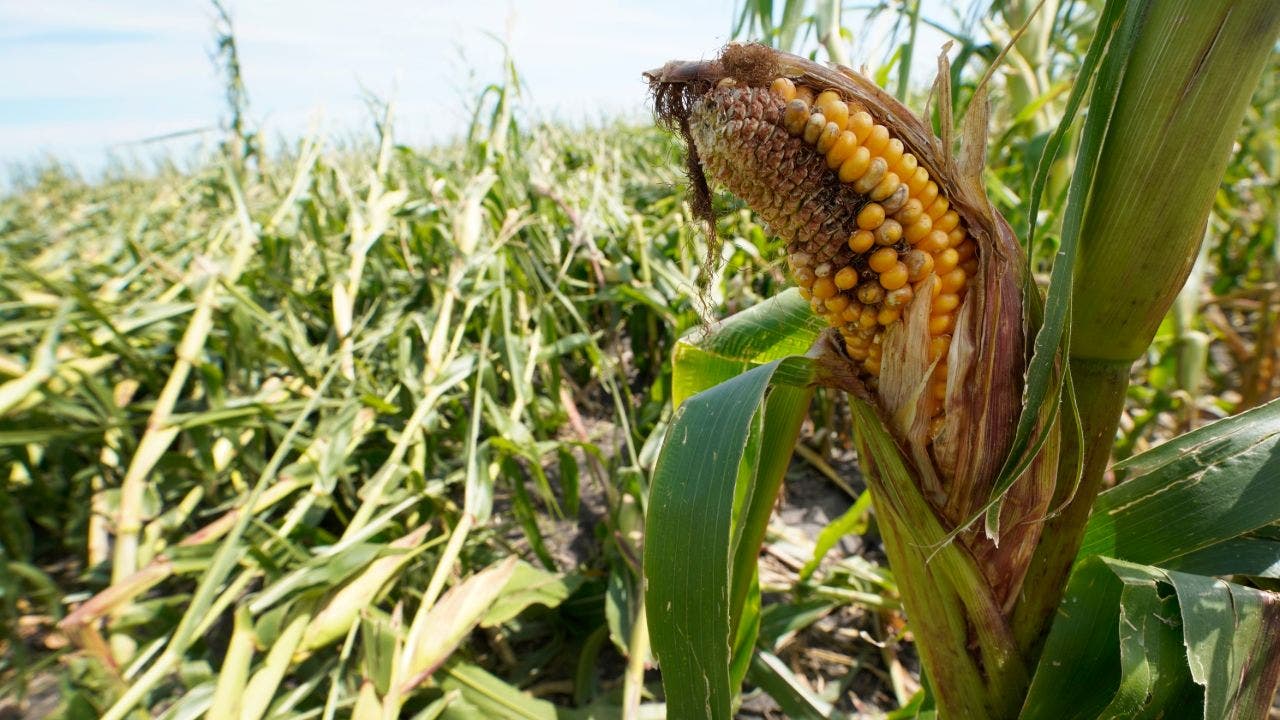 DES MOINES, Iowa — Crop loss estimates from a rare wind storm that slammed Iowa in August have increased by more than 50%, a new report shows.

The U.S. Department of Agriculture said Friday that the number of crop acres that Iowa farmers are unable to harvest has grown to 850,000 (343,983 hectares) from estimates last month that 550,000 acres (222,577 hectares) were lost, The Des Moines Register reported.

The storm, known as a derecho, generated winds of up to 140 mph that flattened crops. The damage then was compounded in late summer with a drought that, at its peak, encompassed much of the state. The drought is again expanding after some September rainfall.

A cornfield damaged in the derecho is seen on the Rod Pierce farm near Woodward, Iowa. (AP Photo/Charlie Neibergall, File) White grub, a voracious agriculture pest, after wreaking havoc in the Vidarbha and Marathwada regions of Maharashtra has also affected about 3,000 acres of sugarcane crop in the Pune district.

White grub (Holotrichia serrata) insect larvae, which in local parlance is called humeni, has resurfaced in the Pune district. The pests eat at the roots of sugarcane, decreasing the moisture and nutrient supply to the plant. This leads to the yellowing and wilting of leaves and causes extensive damage to the base of the shoot, leading to the dislodgement of the cane in the field.

Rutuja More, Agriculture Scientist and Technical Director at the Gujarat-based Institute of Soil and Plant Health, said that in the Pune district — especially around the sugarcane belt of the Daund, Indapur and Baramati talukas — infestation is high. Rapid measures are needed to be taken by the farmers for controlling the After excess rainfall in most parts of the State that caused widespread damages and crop loss for kharif crops, the Gujarat government on Tuesday announced compensation to farmers for the damages under the State Disaster Relief Fund (SDRF).

The State government will conduct a survey to assess the quantum of damage and crop loss. The survey will be completed within next 15 days and farmers having crop loss or damages in excess to 33 per cent will be provided financial assistance on the basis of SDRF, said Gujarat’s Agriculture Minister, RC Faldu.

“The survey work has been carried out in the fields where rain water has receded. Similar survey will be carried out in other parts of the State after the water recedes in those flooded regions,” Faldu stated. Faldu said that the State has received rainfall of over 125 per cent of its Long Period Average (LPA), so there

By Rajendra Jadhav and Marcelo Teixeira

MUMBAI/NEW YORK (Reuters) – India is facing potential delays in the harvest of its massive sugarcane crop, threatening supply worldwide, as millions of migrant workers needed for the harvest may be scared to travel as coronavirus infections surge throughout the country.

India’s sugar harvest begins in October, when other major producers are winding down. The country’s industry is not mechanized, however, relying on migrant workers to travel throughout the nation to cut cane. But with 3.7 million coronavirus infections, the third highest worldwide, there are fears that the harvest could act as a vector for further infections in India.

Harvest delays would result in Indian mills producing sugar more slowly at a time when Brazilian sugar production will be winding down and large producer Thailand is harvesting its smallest crop in 10 years, reducing availability of sugar in the global market.

© Reuters/Amit Dave
FILE PHOTO: Farmers plant saplings in a rice field on the outskirts of Ahmedabad

Planting began on June 1, when monsoon rains typically hit India, where nearly half of farmland does not receive irrigation.

Such a harvest would outstrip the previous year’s record output of 295.67 million tonnes.

Between Friday and June 1, This kharif season, though many States have opted out of the revamped PMFBY, some like Rajasthan, Tamil Nadu, Assam and Karnataka have seen an increase in farmers taking cover under the flagship scheme.

Interestingly, the number of non-loanee farmers taking cover under PMFBY, which has been made voluntary from this kharif season, has risen in Tamil Nadu, Assam, Rajasthan and Haryana.

The fear of crop loss due to factors such as flooding and pest attacks and higher settlement ratio in the previous years could have been the drivers for the rise in non-loanee enrolments in these States, sources said. While crops are largely prone to floods in Assam, Tamil Nadu had witnessed flooding in several districts last year. Rajasthan has seen desert locust attacks early into the season from April this year. He says there is a possibility of phytophthora blight attack on red gram, which is sown on over 10 lakh acres. Farmers have gone for additional acreage after the State government advised them