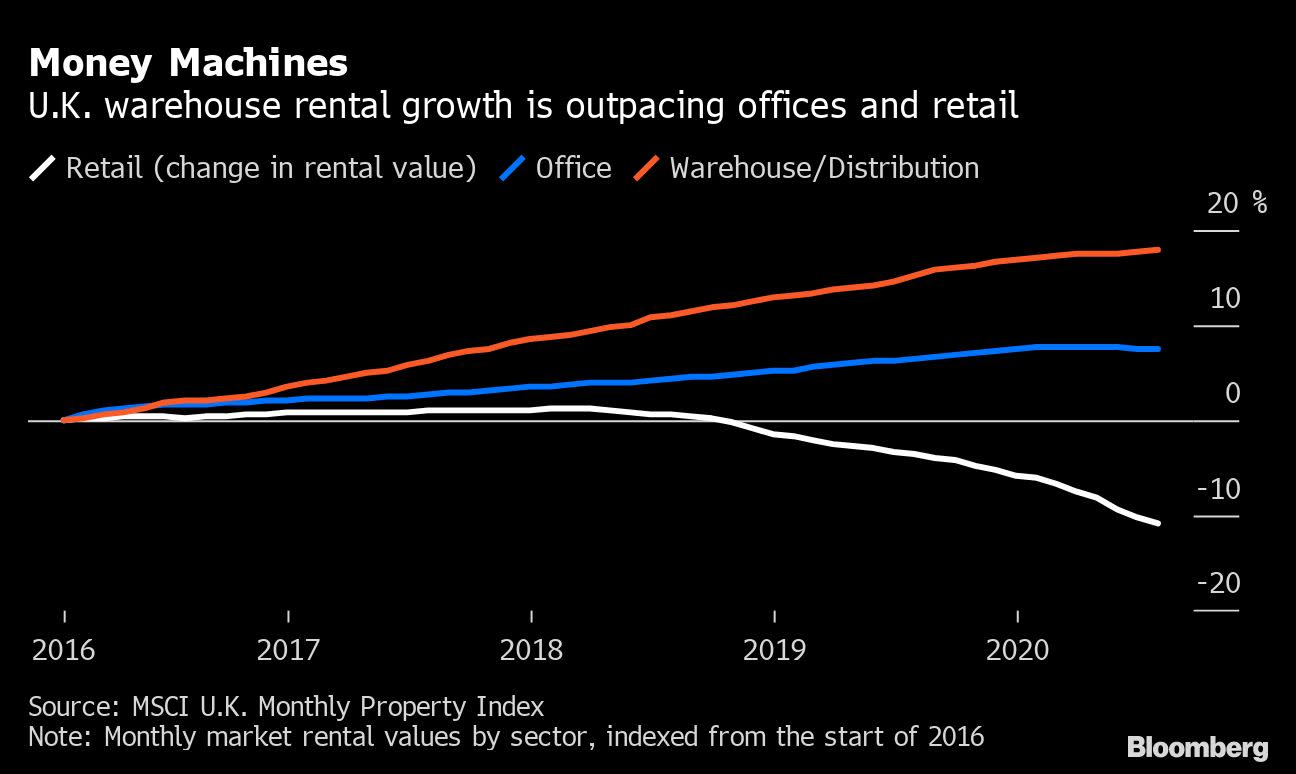 (Bloomberg) — On a building site about 20 miles east of London, workers are busy putting up the largest warehouse in Europe. Just leased to Amazon.com Inc., it can’t go up fast enough.

When it’s done next summer, the four-story “mega-box” will encompass 2.3 million square feet, the size of 40 American football fields. Owner and developer Tritax Big Box REIT Plc had plenty of interest from retailers in the site on the River Thames, but when Amazon came knocking, the rest were pushed aside.

A development on this scale during the U.K.’s first recession since 2009 highlights how the growth of e-commerce has helped make warehouses one of the hottest assets in real estate. Demand for these properties hit a record in the second quarter as online shopping spiked during lockdown. The value of the rent they’re bringing in is surging at more than twice the rate of offices.

“The pandemic has accelerated the shift in consumer habits to online, which means online retailers’ demand for warehouse space in the U.K. is increasing at unprecedented levels,” said Jonathan Compton, senior director for U.K. industrial and logistics intelligence at broker CBRE Group Inc. “This sector is undoubtedly a key area of growth for real estate investment.”

The U.K. has led the e-commerce boom in Europe, and warehouse builders and operators have reaped the benefit. Landlord Segro Plc has seen its shares soar over the past five years; it’s now worth about 11.5 billion pounds ($15.2 billion), making it the country’s most valuable listed property firm. The market has also attracted global giants including Blackstone Group Inc. and Prologis Inc., which runs a logistics park next door to the Tritax site in Dartford.

By contrast, the rise of online shopping has battered traditional retailers and their landlords, most dramatically in the case of Intu Properties Plc. The owner of nine of the U.K’s top 20 shopping centers collapsed into administration in June after failing to reach a deal with its creditors. Other firms are also struggling, such as Hammerson Plc, which is raising money to help it through the pandemic.

Covid-19 threw this trend into overdrive. Internet sales accounted for 20% of all retail purchases in February, before the U.K. government shut down much of the economy to slow the outbreak, according to Office for National Statistics data. In June, the number was 31.8%, with average weekly sales of 2.5 billion pounds.

Driven by this internet shopping spree, the demand for warehouses climbed to a record 12.8 million square feet in the three months through June, with online retailers taking up nearly half of that space, according to CBRE. Amazon alone accounted for 36% of the market in so-called big-box facilities in the first half of this year, according to Savills Plc.

“We’re seeing a massive change in the way people perceive logistics. Twenty years ago, it was the ugly duckling,” said Andrew Parsons, who manages over $3 billion in assets at the Nedgroup Investments Global Property Fund. Now, warehouses are “prime pieces of real estate with massive amounts of capital being put to work. It’s remarkable the reordering of the real estate pecking order.”

The growth in demand is being fueled not only by online retailers, but also by traditional merchants ramping up their internet businesses to adapt to the post-Covid economy. John Lewis Partnership Plc, which is closing department stores and cutting jobs, has said it expects online sales to account for 60% of total trade, up from 40% before the coronavirus.

“Whether it’s for PPE, virus-testing kits or everyday essentials, some supply chains were found wanting during the pandemic, and we are seeing a renewed focus on this by governments and businesses alike,” Segro Chief Executive Officer David Sleath said in an emailed response to questions. The result will be more production in the U.K. and more inventory held locally to prevent disruptions.

“Brexit and global trade wars will only add to these pressures, and that means more warehousing demand in the future,” Sleath said.

With the U.K. mired in a recession, the government trying to prevent a second wave of infections and the looming possibility of a no-deal Brexit further damaging the economy, the outlook for real estate is uncertain. Yet firms in the logistics sector are betting that the changes that have reshaped consumer spending during the pandemic will become permanent.

While internet spending will probably come down slightly from its lockdown highs as brick and mortar shops reopen, it’s still expected to remain at about 28% of total retail sales, according to Len Rosso, head of industrial and logistics at Colliers International Group Inc.

For every 1 billion pounds spent online each year, another 950,000 square feet of warehouse will be needed, CBRE estimates. But the supply of warehouses is tight, especially so-called last-mile facilities located on the fringes of towns and cities. This is an area where U.K. firms are competing with Blackstone. It started a company last year called Mileway, which is the largest last-mile logistics real estate company in Europe, according to its website.

Urban warehouses are “a huge area where we obviously need a lot more capacity,” according to Bloomberg Intelligence analyst Sue Munden. “Demand there is still very strong, and I think rents will continue pushing up.”

For Tritax, this means Amazon will pay a rent premium for its Dartford warehouse, which is located inside London’s M25 ring road, said Bjorn Hobart, a partner at the developer. With this one deal, Tritax locked in the profit expected from the entire site, which has planning permission for another 450,000 square-foot shed and space left over.

A representative of Amazon declined to comment on the deal.

The site’s location and the demand for warehouses also afford Tritax a luxury that few U.K. landlords have these days: the ability to be choosy about its next tenant. The developer has turned down “many offers” for the smaller plot in Dartford, and is holding out for “high-quality” tenants.

“We feel we can achieve better,” said Hobart.