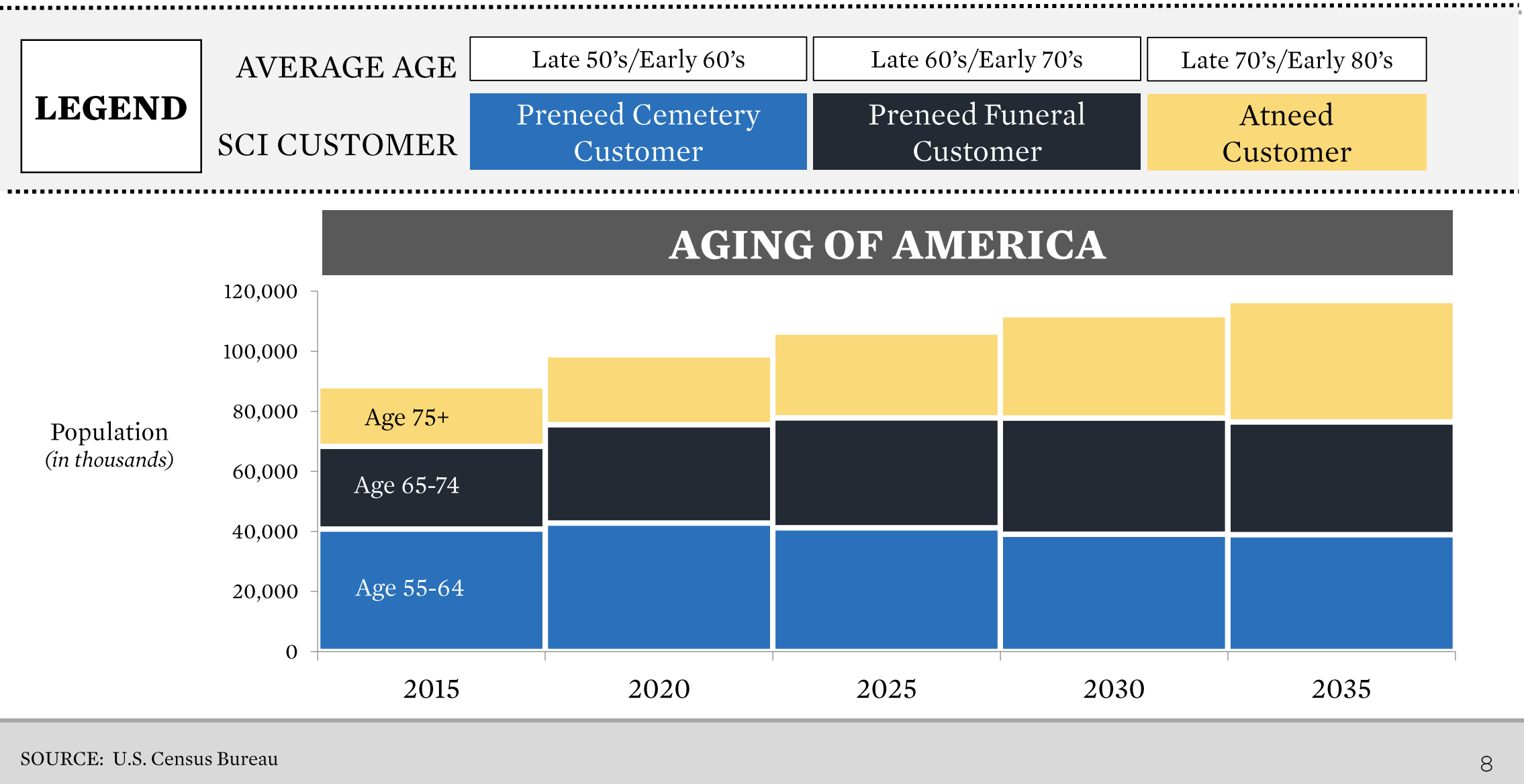 Service Corporation International (SCI) is one of the big players in the deathcare industry. In fact, in the US at least, it’s the largest. The firm has 1,953 locations and counting, 1,181 of which are standalone funeral homes. All of this started decades ago from one little funeral home, but through the benefits of asset clustering, management has been able to grow the company nicely over time. Today, shares of the firm aren’t exactly cheap, but with a population that continues to age and a history of growing and robust cash flows, now might be a good time for investors to consider taking a stake in the company.

A history of strong performance

Service Corporation International isn’t exactly a growth machine. The deathcare space, especially when you’re talking about the funeral homes and cemeteries that account for the bulk of its assets, grows at a pretty sluggish pace. As an example of this, we need only look at the firm’s performance in recent years. Between 2015 and 2019, revenue at the firm grew just 8.2% in aggregate, rising from $2.99 billion to $3.23 billion. In the first half of 2020, the company’s sales came in at $1.62 billion. This is just 0.8% above the $1.61 billion the company generated the same six months of its 2019 fiscal year. 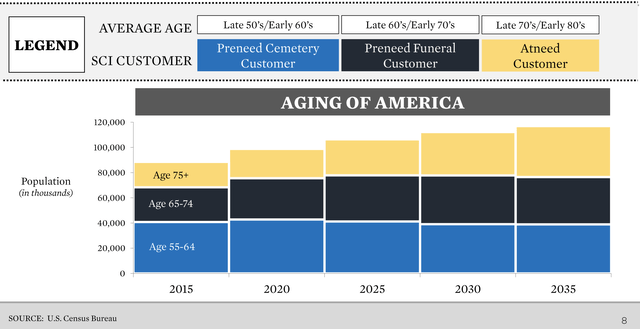 Although growth has not been the name of the game in recent years, investors should expect sales to pick up some in the years to come. As the image above illustrates, the population of older Americans continues to grow. Eventually, this will lead to a cliff that will result in industry overcapacity, but we have probably a solid 30 to 40 years before that becomes an issue. To prepare for the aging of America, management has placed a great deal of emphasis on the firm’s preneed services. As of the end of its 2019 fiscal year, backlog in its preneed business totaled around $12 billion. That’s nearly four years worth of sales that is essentially guaranteed to come to it over time.

Though the picture should brighten up on the sales front in the future, the real story for Service Corporation International is on the bottom side. Earnings have been quite volatile in recent years, but the real measure for profitability that investors should focus on is operating cash flow. According to the most recent guidance provided by management, this figure should range between $600 million and $660 million this year for a mid-point of $630 million. Over the past five years, operating cash flow surged 33.2%, rising from $472.2 million in 2015 to $628.8 million last year, so this represents, probably, another year of expansion on that end. Maintenance capex and lease costs will total around $175 million in all. This should result in true free cash flow (operating cash flow less maintenance spending as opposed to all capex) of around $455 million for 2020.

In order to continue growing, the management team at Service Corporation International does allocate capital toward growth as well. Total growth-oriented spending this year should be about $220 million. This consists of $125 million put toward acquisitions and newbuilds, and a further $95 million for cemetery property development. Ensuring a favorable future for the company does not stop at just emphasizing growth though. It can also include cutting costs when and where reasonable.

A great example here involves interest expense. As of the end of its latest quarter, the company had $3.69 billion in gross debt compared to just $221.76 million in cash and cash equivalents. Management ended up issuing $850 million in new debt, with interest set at just 3.375% per annum, and a maturity date set all the way in 2030. Using that capital, plus cash on hand, the company has decided to retire some nearer-term maturities.

At first, management put out a tender offer, offering to buy back, at 2.042% above par, its 5.375% Senior Notes due in 2024. In all, the company has $850 million of this outstanding. Through the tender offer, the firm was able to retire $217.32 million worth of debt for $222.23 million. After the tender, the company then announced a redemption of the rest of the notes at a 1.792% premium to par. In all, these premiums will cost the firm $865.78 million, which means that net debt will increase by $15.78 million. However, the change in interest rates will save the company $17 million annually. This excludes any adjustment for investing the extra cash it’s paying out for the premium. If the alternative involved refinancing this debt later on at the same interest rate, then this maneuver will end up saving investors $154.22 million in the long run.

Another smart move by management involves its decision, announced on August 12th, to increase its share repurchase authorization. Under its old authorization, the company had $69 million outstanding. This has now been increased by $431 million to $500 million. Over the past 12 months, Service Corporation International bought back 3.88 million of its shares already. If shares remain unchanged at the $47.19 they are trading at as I type this, then we should see the company buy back 10.6 million of its units, or about 5.8% of all shares outstanding.

Shares of Service Corporation International aren’t exactly cheap. The company’s yield right now is just 1.61%, so it’s not exactly a dividend play. Using its forward operating cash flow, the business is trading at a multiple of 13.2. Its price/true free cash flow multiple, meanwhile, is about 18.2. Once again, this is not cheap by any means, but it’s also far from pricey when you consider the stability of the firm, its market-leader position, its robust cash flows, and the prospects for the industry in the long run.

Based on the data provided, it’s clear to me that Service Corporation International is an attractive prospect for the right kind of investor. For those interested in a safe, stable firm with a bright future for the next few decades, this is a great play to consider. For those wanting to make a quick buck, or who are interested in a deep value prospect, it’s best to move on to other pastures.

Crude Value Insights offers you an investing service and community focused on oil and natural gas. We focus on cash flow and the companies that generate it, leading to value and growth prospects with real potential.

Subscribers get to use a 50+ stock model account, in-depth cash flow analyses of E&P firms, and live chat discussion of the sector.

Sign up today for your two-week free trial and get a new lease on oil & gas!

2020-08-19
Previous Post: Crayon Enters into a Strategic Collaboration Agreement with Amazon Web Services
Next Post: ‘Old normal’ hard on women: Can use pandemic as an opportunity to fix