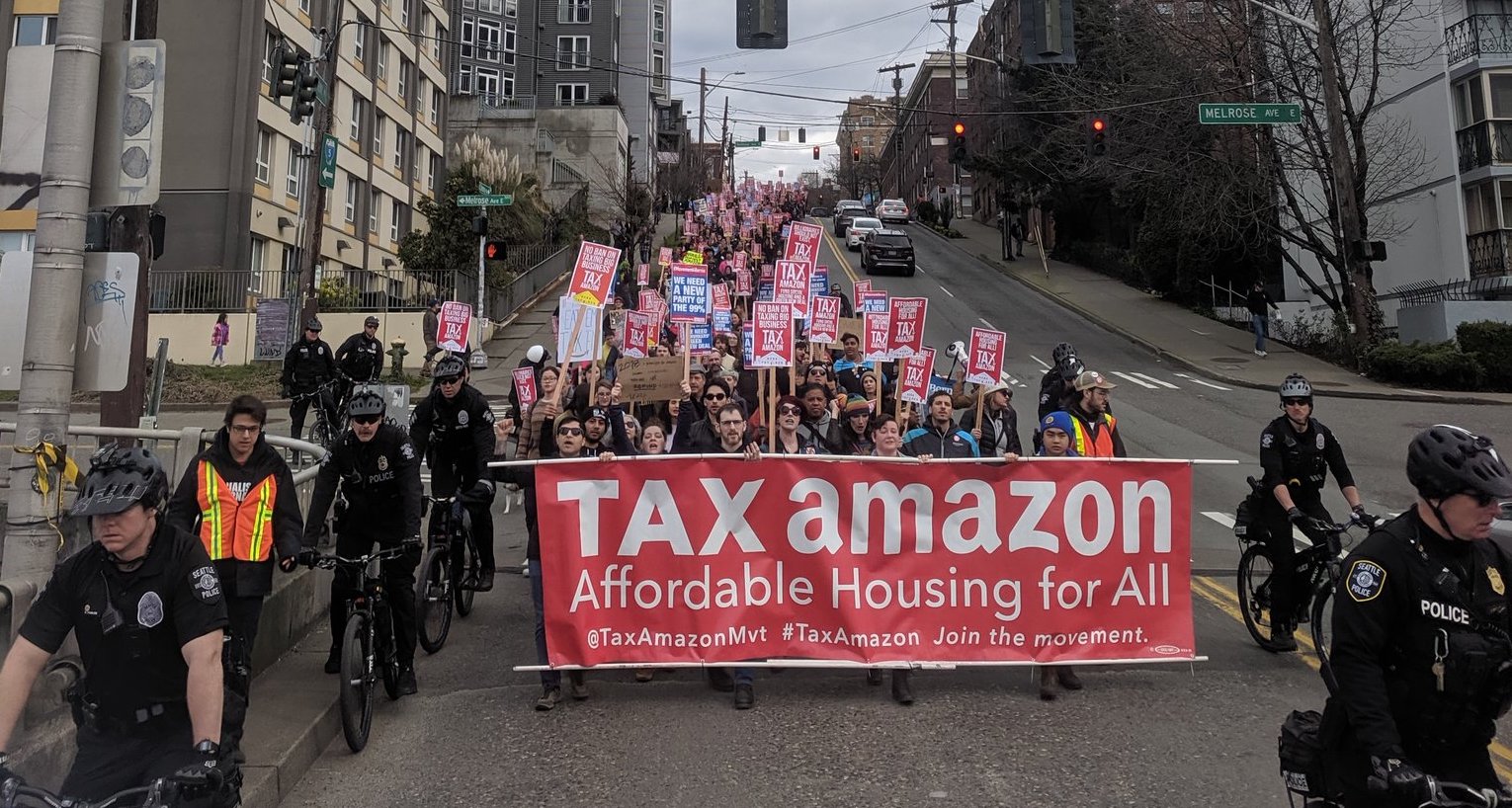 The Downtown Seattle Association is asking the Seattle City Council to reconsider a new payroll tax following a news report that Amazon polled employees about which communities they’d prefer to work from elsewhere in the region.

“This news should be deeply concerning to the city and is another early warning of the long-term, damaging impacts that Seattle’s tax on jobs will have on recovery, the city’s future economic health, and local tax revenues to fund critical municipal services,” wrote Jon Scholes, president and CEO of the Downtown Seattle Association, in a letter Friday to Council President Lorena Gonzalez and Councilmember Teresa Mosqueda, the City Council budget chair.

Bloomberg News reported Thursday that Amazon polled employees about which cities in the region they’d prefer as new “office workplace options,” including Tacoma and Redmond. Amazon hasn’t commented publicly on the poll, but GeekWire confirmed its existence independently from people inside the company.

“We respectfully urge you to reconsider your decision to impose this tax during the most  severe economic crisis to hit Seattle in nearly 100 years,” wrote Scholes. “Seattle still faces double-digit unemployment, and employment rates for low-income workers have decreased by 47% since March. Several sectors, including hospitality and arts and culture, remain largely shut down, and the future remains uncertain.”

Amazon, which employs more than 50,000 people in and around its Seattle headquarters, has been at odds with the Seattle City Council for years over its impact on the community, and efforts by the city to impose new taxes on big businesses. Last year, after a prior tax battle, the company announced plans to move its worldwide operations group to nearby Bellevue, Wash.

The City Council in July approved the tax on the highest salaries at companies in the city with annual payroll expenses of $7 million or higher, generating an estimated $200 million yearly to fund relief for families negatively impacted by the COVID-19 pandemic and alleviate Seattle’s homelessness crisis.

It’s part of a longstanding effort in the city to increase funding for affordable housing and homeless services. The housing crunch has been exacerbated by regional economic boom of the last decade, largely fueled by the tech sector.

The JumpStart Seattle proposal, as it’s known, was introduced by Mosqueda as an alternative to a larger payroll tax backed by her colleagues Tammy Morales and Kshama Sawant.

“In the midst of this crisis, large companies are continuing to do well,” Mosqueda said during a City Council meeting in July. “They’re still paying [six]-figure salaries in some cases, and in some cases, even as high as a half-a-million a year. We’re asking them, through this JumpStart proposal, to contribute.”

“The pandemic, and the current wide-spread adoption of remote work, has already demonstrated the disastrous economic impacts of removing tens of thousands of jobs from Seattle’s urban core,” Scholes wrote in his letter Friday.

Should this tax remain in effect, Amazon is just the first of many companies that will make decisions to relocate employees outside of Seattle.

“While the legislation was cleverly branded by some as the ‘Amazon Tax,’ the truth is that this tax will impact companies and organizations in nearly every sector of Seattle’s economy. Should this tax remain in effect, Amazon is just the first of many companies that will make decisions to relocate employees outside of Seattle.”

We’ve contacted Gonzalez and Mosqueda for comment on the letter. Seattle Mayor Jenny Durkan decided not to sign the bill after it was passed, acknowledging that it would still become law.  Asked about the DSA letter, Durkan’s office referred to a prior statement on the issue.

“I recognize that the bill passed by a veto-proof margin at Council, and therefore a veto will not change the outcome of this legislation,” Durkan said at the time. “However, the taxes under the bill will not be collected until 2022, so there is time to try forge a path that will create progressive taxes we can collect, ensure an even regional playing field and enhance Seattle’s ability to escape a long-term economic depression.”

Click here for the full text of the DSA letter, the latest version of which was also signed by representatives of the Associated General Contractors of Washington, Building Owners & Managers Association of Seattle and King County, the Seattle Metropolitan Chamber of Commerce, and the state chapter of the NAIOP commercial real estate development association.