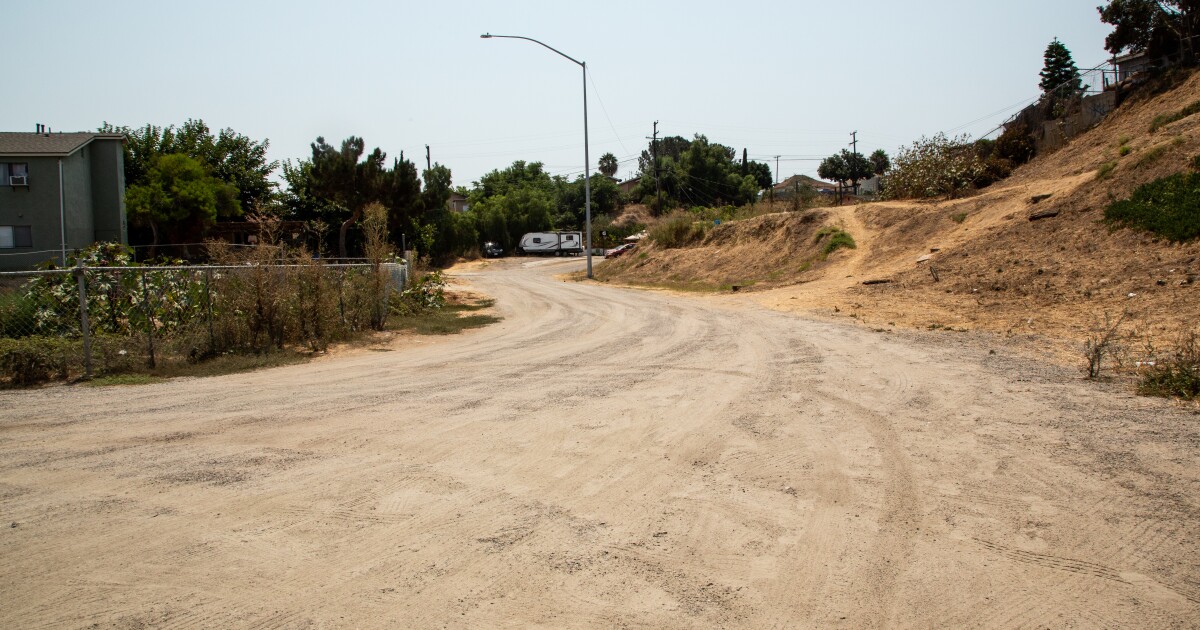 Residents and businesses near the roads deal with excessive dust in warm months, flooding and mudslides during winters, and crater-like potholes throughout the year.

Perhaps more importantly, community leaders say the unimproved dirt streets and alleys can damage neighborhood pride and leave first-time visitors and potential developers with a negative image of the areas.

“A key impact of these dirt roads is the damage they do to the perception within the community of their own self-worth,” said Lizzie Rodriguez, a community activist living just east of Logan Heights in a neighborhood called Memorial.

“People who visit say it’s really different here,” Rodriguez said. “But it shouldn’t be, because they pay taxes just like residents in Rancho Bernardo and La Jolla.”

A new proposal by Councilwoman Vivian Moreno would have the city pave the dirt streets and agree to take over long-term maintenance costs. It won unanimous approval last month from the council’s infrastructure committee.

“Dirt roads and alleys have no place in America’s Finest City – or any neighborhood, frankly,” Moreno said. “This will signal that the city is truly committed to equity across all neighborhoods.”

The timing is not ideal for the city to take on new expenses. San Diego relies more heavily than most cities on tax revenue from tourism, which the COVID-19 pandemic has significantly shrunk.

Two members of the infrastructure committee, Councilmembers Chris Cate and Mark Kersey, said they’d like to see a comprehensive map of the city’s dirt streets, some cost estimates for paving them and projections of long-term maintenance costs.

“Obviously we are in tough budgetary times right now, but having that clarity in terms of a road map moving forward, I think, is going to be key to getting our arms around this issue,” Kersey said.

The streets are mostly small segments of roadway scattered throughout Council Districts 4, 8 and 9 — the city’s poorest neighborhoods, all located south of I-8.

The conditions of these streets fall far below the city‘s goal of having all streets be rated at least a 70 out of 100 in an analysis called the “overall condition index.”

Moreno’s staff said the average rating for the city’s dirt streets is 15.6.

For years complaints that the city’s southern neighborhoods have been treated unfairly have focused mostly on the quality of schools, lack of parks and crumbling infrastructure. Dirt streets have rarely come up in those complaints.

But the issue has been coming up more often in community meetings, said Jose Vergara, a resident of the Stockton neighborhood in southeastern San Diego near state Route 94.

“People who have lived here a long time have just made peace with it and accepted it,” Vergara said. “But newer people say ‘That’s the way it is now, but that’s not the way it has to be.’”

Rodriguez, the activist from the Memorial neighborhood, suggested that the roads were never paved because residents in southern parts of San Diego have historically had far less political clout than residents in the city’s northern neighborhoods.

Many face language barriers, have a lesser understanding of the political process, can’t afford to donate to political campaigns and have jobs that make it harder to attend City Council meetings.

Part of the rationale for not paving the roads likely traces back to the history of the neighborhoods as farming communities east of downtown decades ago, Rodriguez said. It wouldn’t have made sense then for the city to go into farming areas and pave dirt roads.

The poor condition of dirt streets is mainly the result of two city policies, one from 1952 and another from 1979.

The 1952 policy prohibits city crews from doing any work on unimproved dirt streets except if dust becomes unbearable, or if minor upgrades would somehow reduce some other city expenses.

That policy says abutting property owners have the full responsibility to upgrade and maintain the dirt streets.

The 1979 policy determined who is responsible for maintenance of San Diego’s streets, but that policy doesn’t mention dirt or unimproved streets.

Moreno proposes that the council update both policies.

The prohibition against city crews working on dirt streets would be removed from the 1952 policy, and the 1979 policy would be updated to say that the city is responsible for dirt streets and that they are part of San Diego’s “recognized street network.”

The infrastructure committee directed city staff, City Attorney Mara Elliott and the city’s Independent Budget Analyst to come back with a detailed proposal by the end of September.

“Doubling down on the status quo means these communities will continue to be underfunded,” Ward said.

“These dirt streets are vestiges of the past, maintained by policies that are over six decades old,” she said.