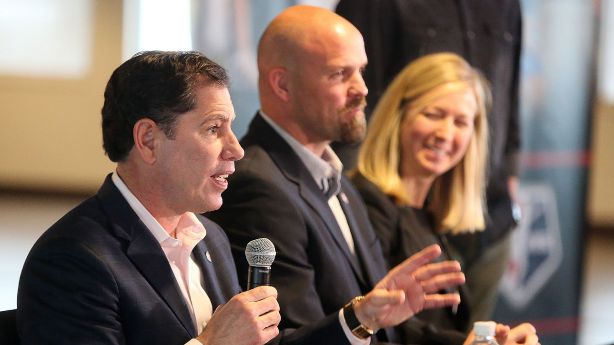 SANDY — Dell Loy Hansen’s right-hand man is following his boss in taking a leave of absence from Real Salt Lake.

RSL chief business officer Andy Carroll announced Tuesday through the club that he will step aside from his role after reports of misogynistic comments and misconduct during his time as an executive with the club.

The club confirmed the decision through a statement from its holding company, Utah Soccer LLC.

“Utah Soccer was extremely disappointed by the allegations in the recent RSL Soapbox article regarding Mr. Carroll,” the statement reads. “Mr. Carroll has spent notable time and energy to further business operations of the organization. Still, Utah Soccer takes these allegations extremely seriously.

“Utah Soccer prioritizes the safety, well-being, and security of its players and employees above all, and does not tolerate discriminatory or derogatory conduct of any kind. While Utah Soccer endeavors to learn more about the allegations raised in the article, Mr. Carroll will be taking a leave of absence from the organization until further notice.”

Carroll has been RSL’s chief business officer since 2015, when he was promoted from his role as the club’s vice president of corporate partnerships. When former RSL president Bill Manning left to take the same combined role with Major League Soccer’s Toronto FC and the Toronto Argonauts of the Canadian Football League, Hansen took on the role of team president and elevated Carroll to the new role, one that focused on the business side of Real Salt Lake.

Carroll has long been viewed by many both inside and outside the club as Hansen’s right-hand man, with the two often making routine public appearances together at team media, marketing and public relations events. After Utah Soccer LLC confirmed that Carroll will step aside, Major League Soccer released a statement of its own into the business professional’s alleged actions.

“Major League Soccer takes seriously the recent allegations concerning the culture at Real Salt Lake and the comments and conduct of investor-operator Dell Loy Hansen and chief business officer Andy Carroll,” the league statement reads. “The league retained the New York-based law firm of Sullivan & Cromwell LLP to oversee the investigation, and these matters will be addressed promptly.

“We are deeply committed to maintaining an environment based on respect and integrity, free of discrimination in any form. Our employees, clubs, players, and fans remain our top priority.”

Several former employees and unnamed sources contributed to the report, including Rebecca Cade, the club’s one-time sideline reporter who currently lives in Atlanta. The aspiring actress who has since left broadcast journalism told the website about particularly troubling events involving Carroll behind closed doors.

“I was told, by a coworker, that there was a management meeting one Friday after work that only included the men in management — like the marketing guys and PR guys, all the guys I work with,” Cade told RSL Soapbox. “(Andy Carroll) passed around scotch, was talking very inappropriately and was discussing my body with the other men.”

The report also details moments when Utah Royals FC players were considered “too ugly” to promote in marketing campaigns, and former photographer Roscoe Myrick’s account of a photo shoot where executives asked him to make the players look “sexy.”

Hansen announced on Saturday that he was taking a leave of absence from the organization following his dissent of the players’ boycott of a match against Los Angeles FC in support of racial inequality and reform for police brutality — in addition to strong, on-the-record reports from RSL original Andy Williams, former general manager Craig Waibel and others alleging racially insensitive remarks and behavior by Hansen.

It’s also assumed that Hansen’s sale of the organization will include other soccer-related assets, including Rio Tinto Stadium in Sandy, Zions Bank Stadium in Herriman, and the club’s $84 million training facility on the west end of the Salt Lake Valley that houses the RSL Academy. No timelines have been set for the sale of the team, though plenty of buyers have expressed interest, including Qualtrics co-founder Ryan Smith, Toronto FC forward and U.S. international Jozy Altidore, and NFL star JJ Watt, whose wife Kealia (ne: Ohai) is an Alta High graduate who currently plays for the NWSL’s Chicago Red Stars.

Prior to joining the RSL organization in November 2012, Carroll worked as the chief marketing officer of the Utah Grizzlies and its home venue, the Maverik Center in West Valley City. Since arriving at RSL, he’s also served on the board of governors of the Salt Lake Chamber, and on the board of trustees with the Salt Lake Regional Medical Center — which is operated by Steward Medical Group, a high-level sponsor of Real Salt Lake.