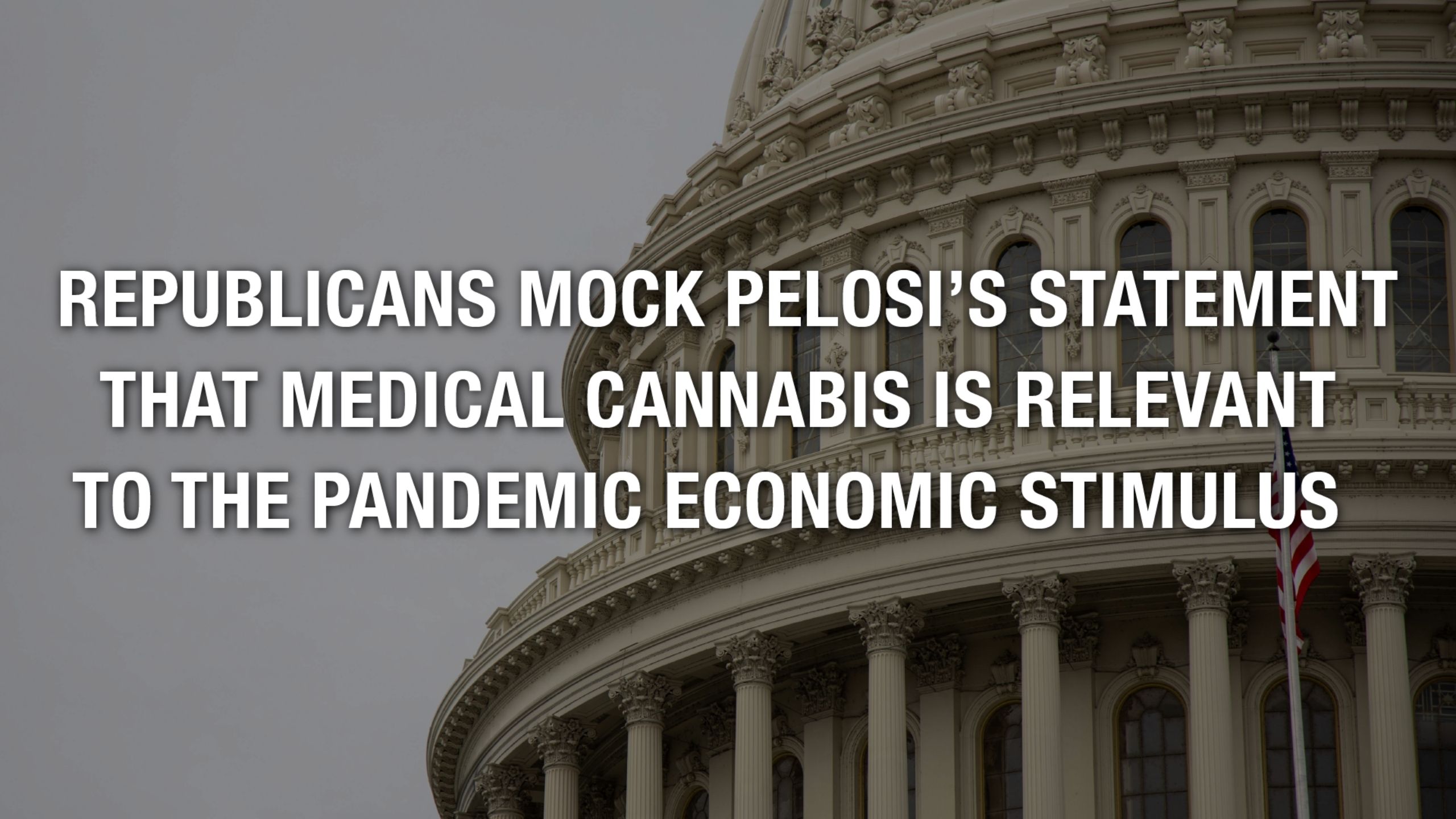 As the House of Representatives battles the Senate over another round of economic support for the pandemic-ravaged economy, Speaker of the House, Nancy Pelosi (D. CA) urged that the legislation include a provision that would allow cannabis-related businesses to have bank accounts. Mitch McConnell, the Senate Majority Leader doesn’t like it.

As the MarijuanaMoment.com reports, “The majority leader, who has consistently railed against the inclusion of cannabis banking protections in the House COVID-19 bill, said on the Senate floor that Pelosi is “still agitating for strange, new special interest carve-outs for the marijuana industry and even claiming they are COVID-related.”

“She said that, with respect to this virus, marijuana is “a therapy that has proven successful.” You can’t make this up,” he said.

“I hope she shares her breakthrough with Dr. Fauci,” McConnell wryly added, referring to National Institute of Allergy and Infectious Diseases Director Anthony Fauci, who has been helping to lead the White House Coronavirus Task Force.”

Obviously, I don’t know what specifically Pelosi was referring to, but the Republican Leadership is probably more concerned about President Trump’s dislike of Pelosi. We should also remember that there are still no other drugs that have “proven successful” against the virus.

First, there are a number of ways in which cannabis may be helpful in treating COVID-19, but before Senator McConnell talks about the state of the science, he should stop blocking Federal research on medical cannabis.

See: People are lining up to grow marijuana for research. Trump’s Justice Department won’t let them.

Second, we know that marijuana has been helpful for people with serious medical problems, including:

So the suggestion that cannabis is helpful in fighting Covid should not be so arrogantly dismissed.

See: COVID-19, AIDS and the Suppression of Medical Cannabis

Reports out of Canada and Israel suggest that THC, CBD, as well as Terpenes may be more helpful than a steroid that has not been mocked by the Senator.

Forbes reports, “New Research Suggests Terpenes And CBD Work 2X’s Better For Covid-19 Inflammation Than Corticosteroid.” According to Forbes, “The new terpene study is being performed by two Israeli research and development companies, Eybna which specializes in terpene-based medicines, and CannaSoul Analytics which is led by Prof. David “Dedi” Meiri, PhD a well known cannabis researcher and biochemist who has studied cannabis’ use for conditions like cancer and Alzheimer’s disease.”

Previously, the same reporter, Emily Earlenbaugh, explained, “There have been several different ways researchers have suggested CBD might help, including its ability to reduce ACE2 expression and pro-inflammatory cytokine production to fight lung inflammation, and it’s potential as an antiviral. But few studies have tested these theories with actual experimentation.”

Meanwhile in Kentucky, Senator McConnell’s constituents are dying from Covid and would not be able to use medical cannabis even if its senior Senator gave a damn. The Kentucky House of Representatives passed a medical marijuana bill in February, but the state Senate is expected to be much more difficult.

The Louisville Courier-Journal reported, “House Bill 136 would set up what has been described by both supporters and opponents as the most restrictive medical marijuana law in the country, allowing doctors to prescribe cannabis and patients to obtain it at approved dispensaries under state regulations.”

See: Medical marijuana in Kentucky? Senate leader not sure if he’ll allow a hearing or a vote

Meanwhile back in Louisville, Breeona Taylor is still dead, and still no one has been charged in her shooting as she slept in a “botched” no-knock drug raid. It’s pretty clear where their priorities are. “A Drug Free America Comes First.”

Richard Cowan is a former NORML National Director and the founder of Safe CBD For Me.

We may earn a commission from links on this page, but we only recommend products we back. Newsweek AMPLIFY participates in various affiliate marketing programs, which means we may get paid commissions on editorially chosen products purchased through our links to retailer sites.

2020-08-18
Previous Post: Initiative Foundation set to connect hundreds of small businesses to millions in aid
Next Post: Stock futures flat in as the S&P 500 inches closer to record