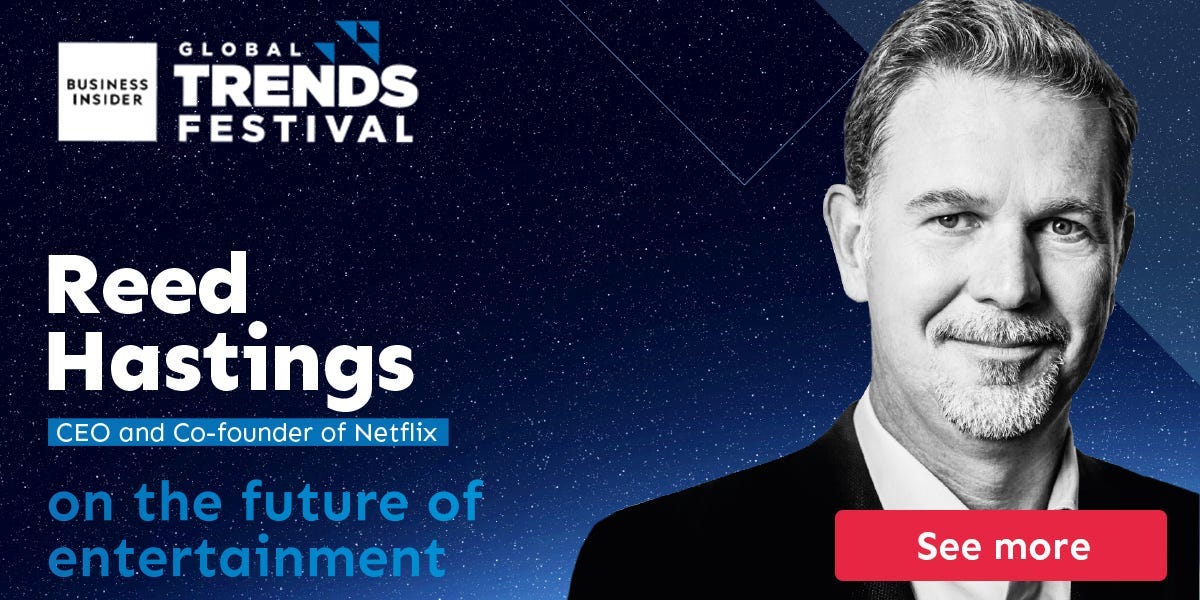 Business Insider is proud to announce that Reed Hastings will speak at the inaugural BI Global Trends Festival, a virtual event taking place the week of October 19-23, 2020.

Reed Hastings is the cofounder and co-CEO of Netflix, which serves 193 million people in 190 countries around the world. In 2000, the entertainment company had just 300,000 subscribers paying for access to movie rentals by mail.

Hastings grew up in Boston and served in the Peace Corps, a time that was formative to deciding to start a business, he has said in interviews and memoirs. In the early 1990s he founded Pure Software, which made products to troubleshoot software. Hastings left the company in 1997, the same year he started Netflix with cofounder Marc Randolph.

Just a few months after the launch, Hastings and Randolph took a meeting with Jeff Bezos and were offered $15 million for the business. They declined. In April 2020, Netflix’s market capitalization reached almost $200 billion.

According to Hastings, YouTube inspired Netflix to start offering movies online. Eventually the company moved into original programming like “House of Cards,” “Orange is the New Black,” “Sex Education,” and other hit shows and movies.

Hear Hastings talk about the future of entertainment at the Business Insider Global Trends Festival. Get your tickets today.

2020-08-14
Previous Post: Disaster Recovery And Business Continuity Takeaways From The Pandemic
Next Post: Past 73, India’s future is in Modi’s hands