Lately, I have been pounding in the refrain that starting valuations are incredibly important to future returns.

On a bigger picture basis, that is why the U.S. stock market and the U.S. bond market are both in such a precarious position today, as real annualized returns going forward are likely to severely disappoint the expectations of investors.

Building on this narrative, a prominent real world example of disappointing real returns relative to expectations is Realty Income (O), a stock I wrote about publicly on Aug. 3, 2016, with the title “Realty Income Corporation: Even More Extravagantly Overpriced.”

Since that article was published, Realty Income, which is one of the most popular and written about stocks on Seeking Alpha, due in part to its consistent monthly dividend, has severely underperformed the S&P 500 Index, as measured by the SPDR S&P 500 ETF (SPY).

More specifically, Realty Income shares declined 12.2% on a price only basis over this time frame, and returned 4.4% on a total return basis, both well behind the S&P 500 Index return of 56.4%, as shown by the screenshot below from my previous Seeking Alpha article.

Sure, one could argue that REITs have been disproportionately negatively impacted by the fallout from the widespread outbreak of COVID-19. However, even prior to this development, many REITs had started to underperform materially since August 2019. Specific to Realty Income, shares of Realty Income actually declined for a majoring of 2016, 2017, and into early 2018, before regaining their footing. Adding to the bearish narrative, REITs have stopped responding to ever lower long-term interest rates, which is a negative divergence too.

Bottom line, starting valuations matter, and in my Aug. 3, 2016, article, I articulated how it would be difficult for Realty Income shares to outperform going forward, and that has indeed been the case roughly four years later.

Starting Valuations Are Incredibly Important As A Determinant Of Future Returns 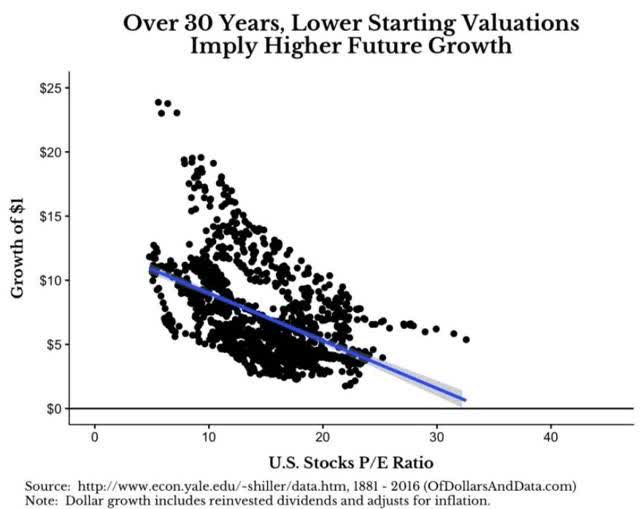 In my Aug. 2016 Realty Income article, I used this valuation snapshot from Morningstar. 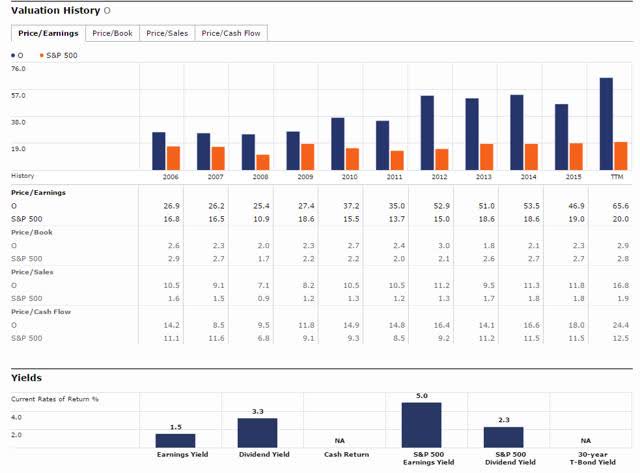 Noting that the traditional valuation ratios listed above did not include REIT preferred metrics like FFO, I added this caveat.

The valuation metrics shown above leave out some of the preferred valuation metrics for REIT shares used by REIT investors. Having gotten that out of the way, the valuation tables show a useful mix of statistical data to compare relative and absolute valuations. From looking at the table objectively, the conclusion is clear. Simply put, shares of Realty Income have never been more expensive on an absolute or relative basis.

REIT investors like to talk about funds from operations, declining cap rates, and compressed cap rates, which are all relevant metrics too, however, simply focusing on the bigger picture, including noting that REITs had outperformed for roughly two decades, and traded at historically high valuation multiples, has proved to be prescient too.

In my recent bullish Simon Property Group (SPG) article, titled, “Simon Property Group Shows Recovery Is Ahead Of Schedule,” I used the following snapshot image from The Contrarian to illustrate that I had been bearish on REITs all the way back in Aug. 2019.

I then provided context, highlighting that my price targets from Aug. 2019 had largely got the directional call on REITs correct, with a couple of notable misses too. Here’s the relevant commentary that I authored from the July 2, 2020, article on Simon Property Group.

LTC Properties (LTC), Coca-Cola (KO), Cloud Peak Energy, American Campus (ACC), Regency Centers (REG), Realty Income (O), McDonald’s (MCD), Omega Healthcare (OHI), STORE Capital (STOR), W.P. Carey (WPC), and Kimco Realty (KIM) follow the examples illustrated above, where their share prices moved in the direction of my Aug. 16, 2019, intrinsic value price targets, meaning downwards. With the benefit of hindsight, I should have been a REIT-focused analyst, as I would have saved many a lot of money, as these stocks dominated the list of my overvalued candidates circa August of 2019.

In contrast, I missed the mark on the list above, which is a partial list of my misses (this is a humbling business) with my intrinsic value price targets on Procter & Gamble (PG), which I still think investors should be short today as it is historically overpriced from my vantage point, American Tower (AMT), which has benefited from multiple secular tailwinds, and Amazon (AMZN), the singular Belle Of The Ball Stock (my terminology), that has benefited from secular tailwinds too, which I will discuss later in this article.

Looking at the long-term chart of Realty Income, it’s clear that shares struggled in 2016, through 2017, and into 2018, and then rose pretty much uninterrupted until the COVID-19 stock market meltdown.

Reading commentary on REITs, many analysts are bullish right now, at least outside the mall sector, as there’s an almost universal belief that cap rates will compress, following what has happened in Europe.

However, almost nobody is considering what happens if long-term interest rates went the other direction.

On that note, the iShares 20+Year Treasury ETF (TLT) has declined fairly sharply this week, with long-term interest rates rising. 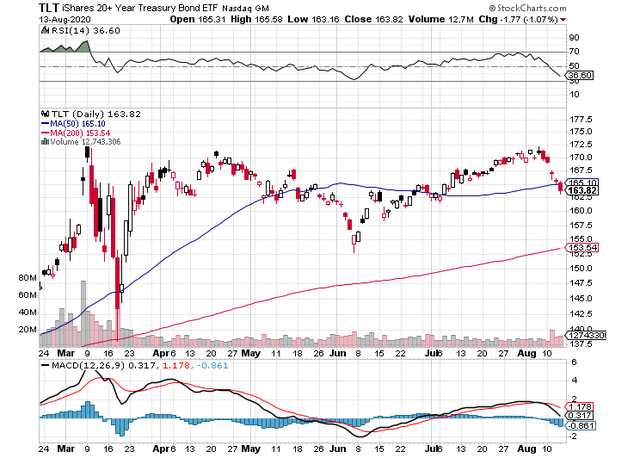 One week does not make a trend. However, an investor has to seriously look at the chart above, and notice that when longer-term interest rates spiked higher briefly in March 2020, at a time when the current market structure was challenged, that development, alongside the outbreak of COVID-19, sparked an unwind in REIT shares, including Realty Income shares.

Bigger picture, it should not be inconceivable that U.S. Treasury 10-Year interest rates could return to their late 2018 highs, which were roughly seen in 2011 and 2014 too.

Thus, with inflation expectations rising quite a bit since March of 2020, and the Fed openly discussing letting inflation run hot, to be symmetric with previous inflation target shortfalls, a steepening of the yield curve, which has already been underway for much of the past two years, could conceivably continue unabated. 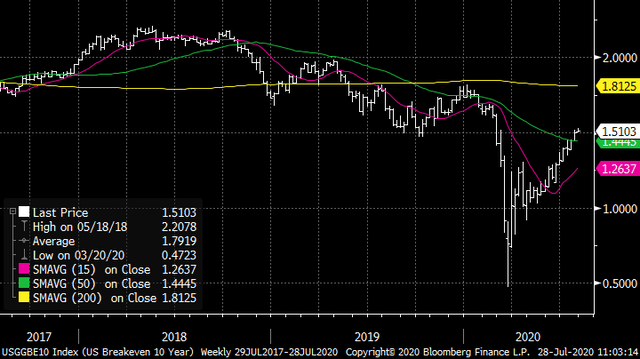 Given how far investors have extended on the duration curve seeking yield, a further steepening of the yield curve, which already has been steepening for roughly two years as shown above, is going to be doubly problematic, as overweight, yield-oriented investments are going to suffer disproportionately. With rent contracts that have little built-in inflationary protection, Realty Income is extremely vulnerable to rising interest rates and rising inflationary pressures, as they would be unable to raise rents sufficiently, and they would lose their cap rate arbitrage advantage.

Let’s be clear here, Realty Income is not CBL & Associates (CBL) or Washington Prime Group (WPG), and even those investors not too constructive on shares of Realty Income, like myself, acknowledge that they have advantages over some of their peers, and shares are not wildly overvalued, even after going nowhere for the past four years on a total return basis.

For perspective, when I authored my article on Aug. 3, 2016, I had a price target of $40 for Realty Income shares, and Morningstar had a $50 price target.

Since then, my price target was nearly hit twice, and I have actually raised my discounted cash flow price target to $50 per share. Over the same time frame, Morningstar has raised their intrinsic value price target to $65 per share, from $50 per share. Thus, there’s not extravagant downside in Realty Income shares today in a base-case scenario, unless long-term interest rates really take off from my view. However, there’s the very real chance that Realty Income shares deliver suboptimal performance again for the next four, five, or six years.

Being perfectly candid, I could see a scenario in a robust economic recovery, where Realty Income shares test their old highs. However, long-term gains are going to be tempered here, and in the REIT sector, in my opinion, due primarily to rising long-term interest rates. A counterpoint would be that REITs have historically outperformed when interest rates are rising due to economic strength. However, a stagflationary recovery is possible, and perhaps even probable too. Also, long-term interest rates have been in roughly a 40-year bear market, so almost all REIT investors today have not experienced a rising interest rate environment, particularly at the long end of the curve.

Ultimately, starting valuations are incredibly important, and interest rates matter for interest rate sensitive assets, and REITs, specifically triple net lease REITs, are at the top of the list of interest rate sensitivity. With regard to interest rates, the focus should be on longer-term interest rates, particularly the shape of the yield curve, and both its starting valuation, which remains elevated with forward price-to earnings and trailing price-to-earnings ratios above 40, after investors have piled into Realty Income shares the past two decades, and rising interest rates are going to offer continued headwinds for Realty Income shares in my view. Adding to the narrative, I think it’s highly probable that both U.S. stocks, U.S. bonds, and REITs, which have all outperformed together, propelled higher by lower discount rates, struggle as traditional portfolios fall short of investor expectations in the years ahead.

Disclosure: I am/we are short PG, SPY, AND TLT, VIA PUT OPTIONS, IN A LONG SHORT PORTFOLIO AND I AM LONG SHARES OF SPG. I wrote this article myself, and it expresses my own opinions. I am not receiving compensation for it (other than from Seeking Alpha). I have no business relationship with any company whose stock is mentioned in this article.

Additional disclosure: Every investor’s situation is different. Positions can change at any time without warning. Please do your own due diligence and consult with your financial advisor, if you have one, before making any investment decisions. The author is not acting in an investment adviser capacity. The author’s opinions expressed herein address only select aspects of potential investment in securities of the companies mentioned and cannot be a substitute for comprehensive investment analysis. The author recommends that potential and existing investors conduct thorough investment research of their own, including a detailed review of the companies’ SEC filings. Any opinions or estimates constitute the author’s best judgment as of the date of publication and are subject to change without notice.