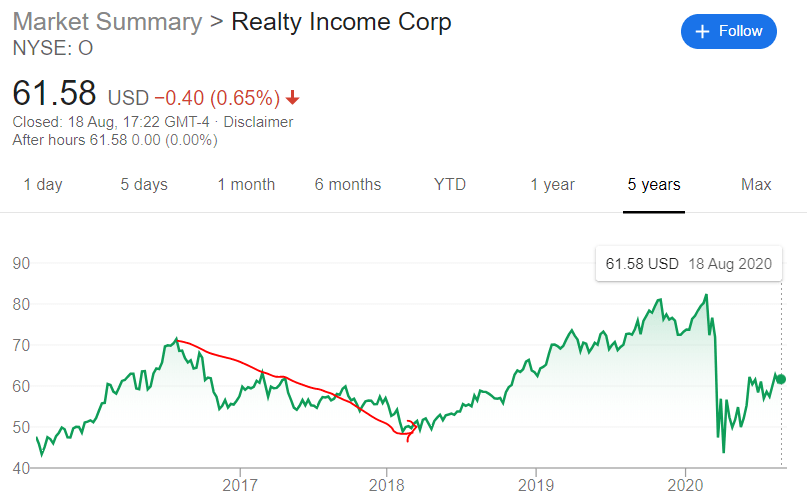 Realty Income Has Rarely Been So Bearishly Priced (NYSE:O)

Two recent, popular, articles from KCI Research and Old Time REITster have given bearish takes on Realty Income (O). As a bull of the stock (my recent article can be read here), I appreciated the chance to read through alternative views of this REIT and urge anyone who hasn’t engaged with these pieces to give them a read.

Divergent views are often more valuable for an investor than views that align with one’s own because they allow you to test your assumptions. In this article, I’d like to discuss Realty Income in light of the issues raised in these articles and add to the debate about the stock.

Many investors in Realty Income are interested in the dividend income alone and will happily sit through periods of weaker performance from the shares as long as the dividend stream performs. Considerations of how the stock does relative to the S&P hardly figure at all in their assessment of how it is working for them.

This point was well made in an article that followed the KDI Research piece, by Regarded Solutions. I’d urge you to give that a read too.

Let’s take a look at the period of performance that KDI Research talks about and see if we can take anything further out of it.

The red line I scrawled on the chart below covers July’16 to February ’18. The stock pulled back 32% while paying strong dividends as always, which reduced the total negative return. 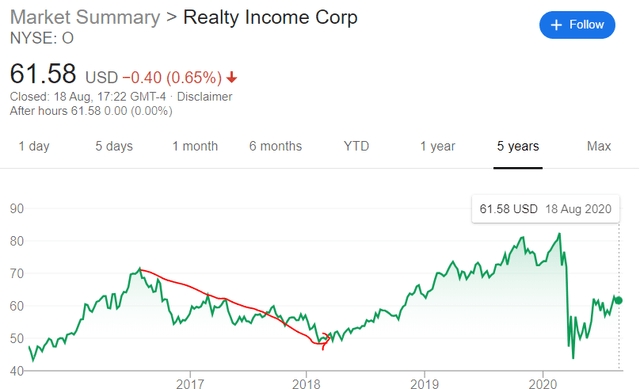 During that time, interest rates increased. The next chart shows the 10 year T-bill yield. It rose from 1.5% to 2.5% in the period that Realty Income shares fell, a major move from the level it started. The T bill yield continued rising, from 2.5% to 3.2% at end 2018. This is a smaller move and by then Realty Income stock had started to recover. 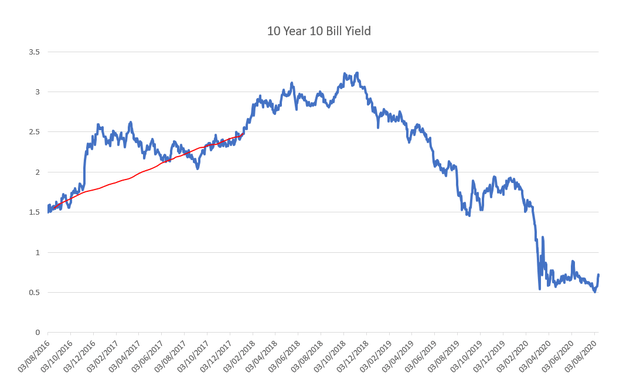 Realty Income returned over 80% from the trough in 2018 to its pre-COVID-19 Peak in February this year, strongly outperforming the S&P (23% over this period). 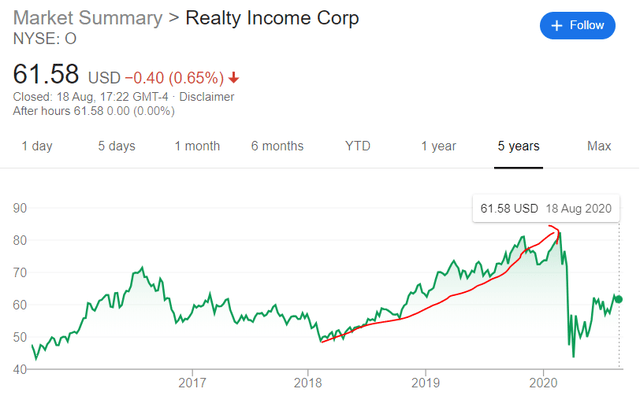 Amid mounting trade tensions and a slowdown in GDP growth in 2019, interest rates declined over that period (see the next chart down). A stopped-clock bear on Realty Income made the same “mistake” as a stopped-clock bull in the prior period, missing out on a lot of upside when the benchmark yields had turned.

Remember the point I made above about income investors in Realty Income. Long term income holders of this REIT were getting just what they want from it the whole time, the consistent monthly dividend with a little growth. They were probably pleased with the strong performance, but it isn’t why they are there. 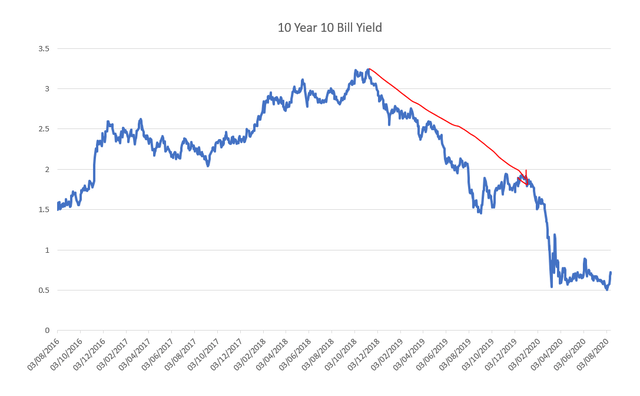 Finally, of course, you have the “COVID-19 crash”.

So far, we’ve seen that bond yields can push Realty Income stock around quite a bit, and of course that goes for the whole REIT sector. Equities involve risk, and income equities, as opposed to growth equities, especially perhaps REITs, price off risk free rates.

Here’s the spread between the yield of Realty Income Shares and the 10-year T-Bill. 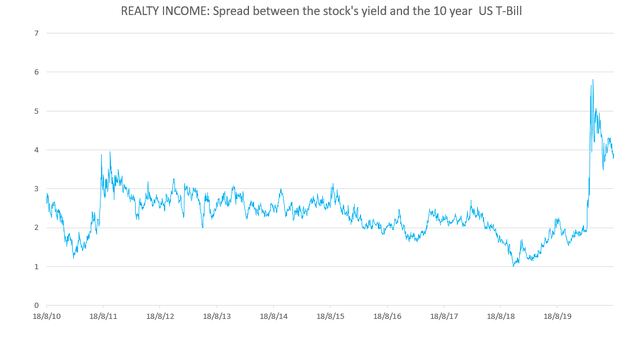 This REIT has spent much of the last ten years yielding 2-3% above the 10-year T-bill yield. Sometimes the T-bill makes a move and Realty Income doesn’t respond with as much elasticity as other times. The shares also reflect economic growth assumptions and management strategy, and sometimes they count for more in the collective mind of the market than a fluctuation in the T-bill yield. But the relationship with the 10 years is clear.

People quite often comment to the effect that Realty Income is ‘too expensive.’ I understand that its normal trading range, which puts the yield in that 2-3% range over the T-Bill, might not seem that great. But the market typically values it there because of its track record and the logic of its business model. To convince me it’s expensive, rather than just a high quality business you don’t get ‘cheap’, you have to show why the track record shown below won’t extend into the future after the COVID-19 crisis has passed. 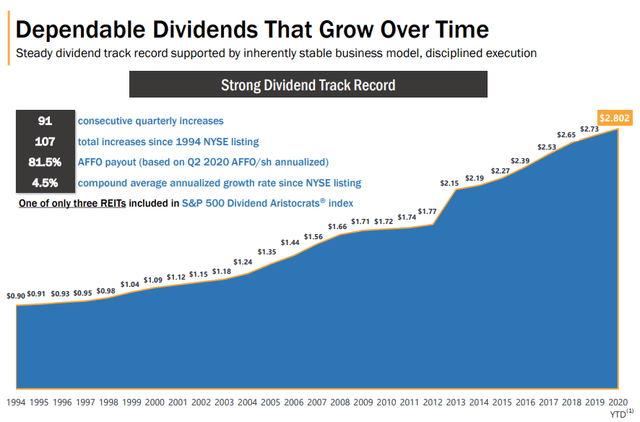 What we can say as investors and analysts is that as the spread approaches 2%, and even occasionally moves below that level, there’s less room for error – or risk – than when the spread over the 10-year is nearer 3%. Depending on your other investment options, and your temperament as in investor, you might wish to lighten up your Realty Income position when the spread is in the lower reaches of this range, and add to it when it is around 3%.

Which makes the current spread of 3.7% very interesting…

I think Realty Income, on a look-through, ‘normalized’ basis, is unusually cheap here.

One of the statements in the KDI piece that I raised an eyebrow at was the claim that REITs aren’t responding to lower interest rates. It’s in the bullet points at the top of the article.

Adding to the bearish narrative, REITs have stopped responding to ever lower long-term interest rates, which is a negative divergence too.

Many REITs are still down from pre-COVID-19 levels, but that doesn’t mean REITs have “stopped responding” to lower rates.

REITs always and everywhere price in the current risk free rates and the market’s estimation of their future course. REITs never “fail to respond” to rates. Other factors come into play, which sometimes offset the effect of rates, but rates are always making themselves felt.

So why is the spread between Realty Income’s yield and the 10-year so high now?

That reflects the market’s estimation of the risk to Realty Income’s rental cash flows – and ultimately its ability to pay its dividend at the current level – due to the uncertainties of the lockdown economy.

The article from Old Time REITster addressed this issue with a close focus on Realty Income’s relatively light reserve build in 2Q.

One of the mistakes Realty Income bulls make it to refer to the stunning track record of delivery as if this alone guarantees the future. The track record is instructive in terms of what the company has delivered and every month that passes is more experience and refinement of process for management. But it doesn’t account for swathes of tenants being shuttered during a pandemic and the implications of this going forward. Old Time REITster looks at the real issues around rent receipts, all of which is good, detailed analysis.

I disagree with the conclusion, however, not least because it looks at the yield in isolation.

Don’t look at the yield in isolation

What matters isn’t the yield. We can’t say whether it’s too high or too low in itself. What matters is that O is yielding 4.5% at a time that the risk free rate, as represented by the 10-year yield, has collapsed to 0.7%. This means that all-important spread of Realty Income against the T Bill has exploded. 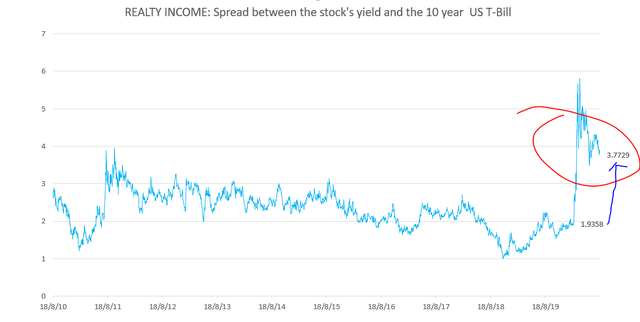 The spread has moved from 1.9% pre-COVID-19 to 3.7% today. That’s nearly a doubling of the premium demanded by the market over the benchmark! Not only that, the spread is far higher than the upper reaches of the usual 2-3% range, and very much recognizes the risks that Old Time REITster is talking about.

The words “dividend cut” might, of course, seem like sacrilege and a denial of nature when mentioned in an article about Realty Income. But how else to you explain the market pricing such a high quality REIT at this very unusual spread over the T bill rate?

When Realty Income fell in 2016-18, the spread stayed in its normal range. The share price simply fell to accommodate a higher hurdle rate as rates rose. This is very different. The market is pricing in lower cash flow and dividend payments (expressed as the risk premium over the risk free rate). 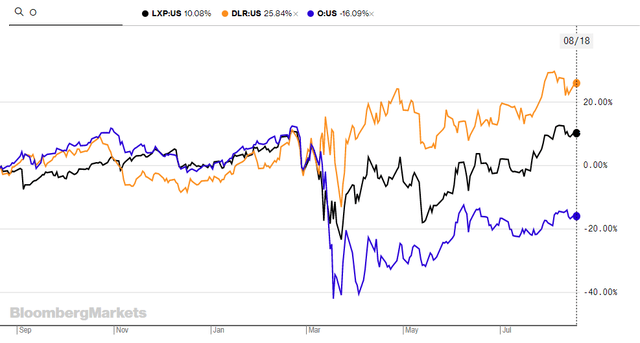 LXP, which is successfully transforming into a fully industrial REIT, and Data Centre REIT DLR are not expected to experience any material cash flow difficulties. Sure, they both took a hit in the March sell off, but recovered. LXP took longer as it has residual office exposure (which it is moving away from) but the market has accepted the outlook there is solid. DLR has benefited from the “all things digital” market and has moved up since the crisis hit.

It’s clear from the chart that the market’s expectations for Realty Income have become relatively way more conservative than for the other two REITs. Whether you are a bull or a bear, don’t think the market is missing anything. It is all over this issue.

The following slide contains one important and one very important piece of information. 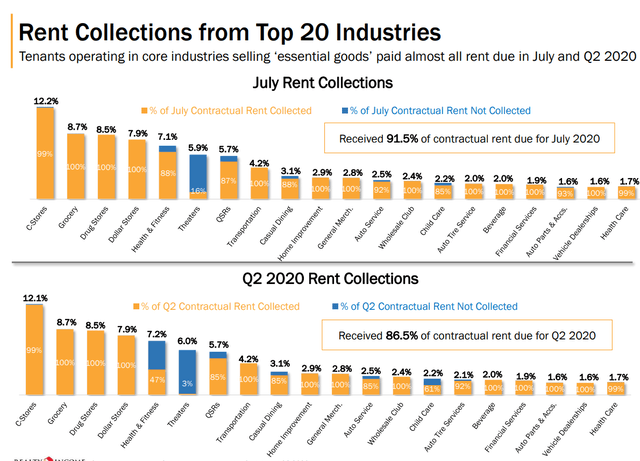 Imagine for a second that Realty Income had never run assets in these segments. It would look much like it does now, diversified both in business segments and geographical presence, just without its tenants that operate theaters, fitness clubs and QSRs. Where would the REIT be trading? I’d bet that the spread over the 10 years would be considerably lower.

When looking at an issue like this, a key question is to ask how public the information is. This subject has been discussed in great detail on recent management calls. Most Realty Income investors are well versed in the exposures by industry. The slide above appears regularly in Seeking Alpha articles on the stock.

The market is also familiar with the underlying resilience of the other segments in this REIT’s portfolio. This comes from the combination of non-discretionary, low price-point and service orientation in retail (80% of rent) and E-commerce resilient non-retail (16% or rent). 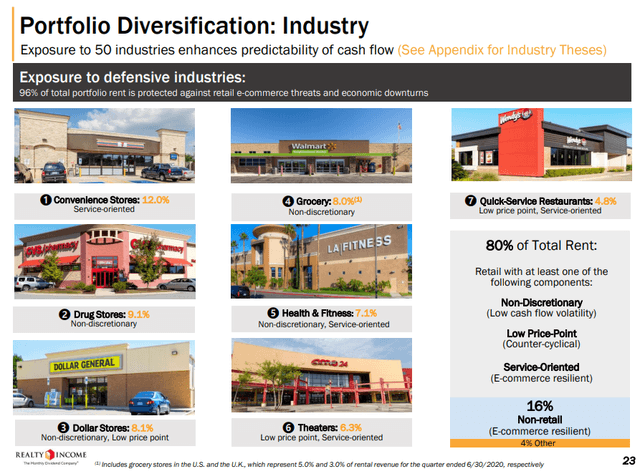 What the market has done then, is effectively taken a write down of rental arrears on COVID-19-sensitive tenants as well as seriously marking down the value of the land and buildings behind those rents, by wiping $7.2bn off the value of Realty Income before the COVID-19 crisis hit in March.

It’s for this reason that I disagree with Old Time REITster’s view that:

I would argue this possibility is in the price. That isn’t to say that if write-offs increased, Realty Income shares might not have a bad day. Just that I would view such a day as a buying opportunity.

I found CEO Sumit Roy’s discussion of 2Q arrears on the results call to be reassuring.

The downside scenario here is in the price, but with the above comment from CEO Roy, I see a very experienced management team working hands on with its tenants and making a constructive assessment of the prospects of rent that is under discussion.

The KDI Research article raised the question of higher inflation and rates, given the money printing and ramp up in government spending that has accompanied the pandemic.

As we saw above, rising interest rates can be hard on Realty Income’s stock price.

Currently, there is massive spare capacity in the US economy (and the UK’s, where Realty Income also has exposure). We’ve seen inflation in listed asset prices already due to the liquidity that has been unleashed. My own view is that entrenched price inflation, which is what would lead to higher interest rates, would need substantial re-onshoring of jobs in manufacturing and/or a much tighter labor market. Remain vigilant, but don’t price in higher rates to your Realty Income base case for now.

The reason that Realty Income has not risen on lower rates is because of the risk that the pandemic imposes on its rental income. If you think this outlook should gradually improve from here, the current level is a buying opportunity for the shares. Think of selling when that 10-year spread next approaches 2%.

Disclosure: I/we have no positions in any stocks mentioned, but may initiate a long position in O over the next 72 hours. I wrote this article myself, and it expresses my own opinions. I am not receiving compensation for it (other than from Seeking Alpha). I have no business relationship with any company whose stock is mentioned in this article.