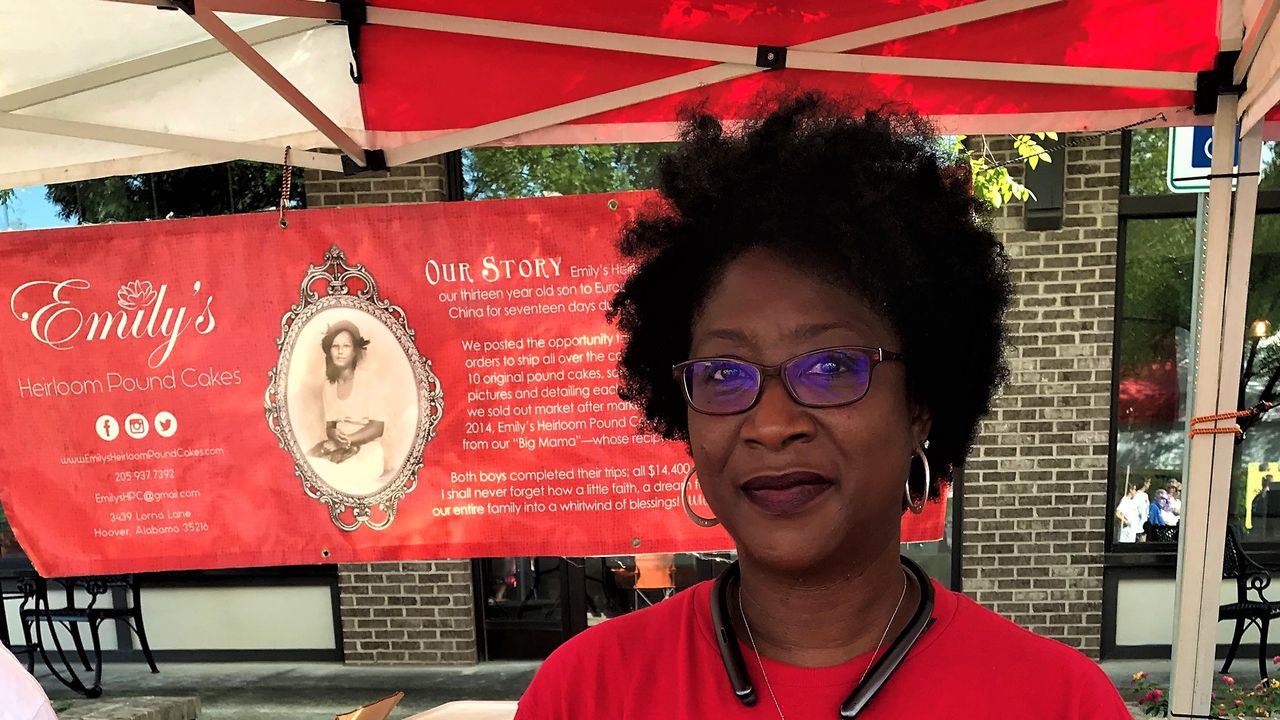 Alabama fans of the QVC home shopping network should expect to see a familiar face Wednesday. April McClung, the owner of Emily’s Heirloom Pound Cakes, will make an appearance in four segments throughout the day.

The segments are part of the Quarate Retail Group’s Small Business Spotlight–a collaboration with the NRF Foundation, the nonprofit and philanthropic arm of the National Retail Federation, to spotlight Black-owned small businesses as they navigate operating during the difficult retail period of the COVID-19 pandemic.

The current phase of the program, which kicked off Aug. 12 and ends in mid-October, will highlight 20 Black-owned businesses with television spots on QVC and HSN, as well as features on Quarate Retail Group websites and social media accounts.

The past few months have been a busy time for McClung, who was recently named as one of 12 new members of the Birmingham chapter of Les Dames d’Escoffier, one of the county’s most prestigious professional societies for women working in the food, beverage, and hospitality industries.

McClung, like many of her peers in culinary retail, pivoted her revenue model to adapt to the difficult and unpredictable times of operating during the world-wide public health crisis. Before the pandemic hit, McClung had been a vendor at Sam’s Club road shows for nearly four years.

Road shows, the wholesale retailer’s program offering a display of items staffed with personnel to give samples to customers, were more of a way for McClung to showcase her brand of cakes than bring in direct sales.

“They’re more like marketing dollars for me, because it’s very expensive. Sam’s Club takes a good chunk and they make me reduce my price so that customers will come. So, it hasn’t always been the most profitable,” said McClung. “But I did it because I thought I needed to do it to build my brand, because I get a lot of exposure. And a lot of times, I’m able to convert Sam’s club members to heirloom pound cakes customers.”

The profits, says McClung, would come when new customers visited the bakery website or sought out the cakes at local farmers markets and pop-up displays. Still, about 35 to 40 % of her business came from Sam’s Club.

But in an effort to reduce the spread of COVID-19, Sam’s Club temporarily stopped the road shows and sample events.

Adding to that revenue loss, larger retail events where McClung would normally pull in massive sales, such as the Southern Women’s Show and Birmingham’s Christmas Village, were also cancelled or postponed.

“Between the two of those, that’s 80 percent of my business,” said McClung.

With in-store events and trade shows gone, she decided to devote more time to her digital brand, improving her website and answering emails from marketing and PR reps.

“I used to get so many emails from LinkedIn and (other) marketing people. I used to just- delete, delete, delete. Because I didn’t want to deal with it,” said McClung. “But once I started dealing with those marketing people and understanding what I needed to do to get that website cranking, I went after it. Now the (sales from) my website have tripled.”

She also started doing unmanned pallet displays in Sam’s Club– instead of a full presentation with samples, she pays an employee to set up a display table of cakes with a banner.

“And what we figured out was, since we can’t be there, what sells our cakes is our story and pictures,” said McClung.

Those displays have become more profitable for her than the traditional road shows.

“I never want to do another traditional show as long as I live,” she laughed. ” Because I don’t have to have anybody standing there (at the display) and paying them 25 percent, when I can pay an hourly person to merchandise.”

She currently has displays at two stores in Huntsville and two stores in Tuscaloosa. When the time comes to set up her inventory, she posts an ad for the temporary retail position on a job website like Indeed.

“I pay a two-hour minimum and it’s done. So now, we’re talking about, in the next few months, doing 20 shows at a time.”

Food truck routes have been another revenue boost for McClung’s sales. Over the past few months, neighborhoods and homeowners associations have invited food trucks to set up shop as an enjoyable way to help their residents alleviate the duties of daily cooking. Some neighborhoods have started to book two trucks at a time–one for an entree and one for dessert. She’s often been paired with Simone’s Kitchen ATL or the Hollywood Grill Food Truck.

“It’s useful for the vendors. When you have a good lineup, the people are steadily going to come.”

While McClung doesn’t have a food truck– though she’s open to investing in one when the time is right– she’s been making good use of her van and tent.

“Right now, I’m on a food truck route without the expense,” she laughs. “So, between the farmers market and the food truck routes, that took the place of the large events.”

But not every large event has been cancelled. Some organizers are choosing find a way to adapt to the current climate with social distancing protocols and larger outdoor spaces.

“I’ve got a big one in Jackson, Miss. that’s coming. They have not cancelled. They just say “mask up.”