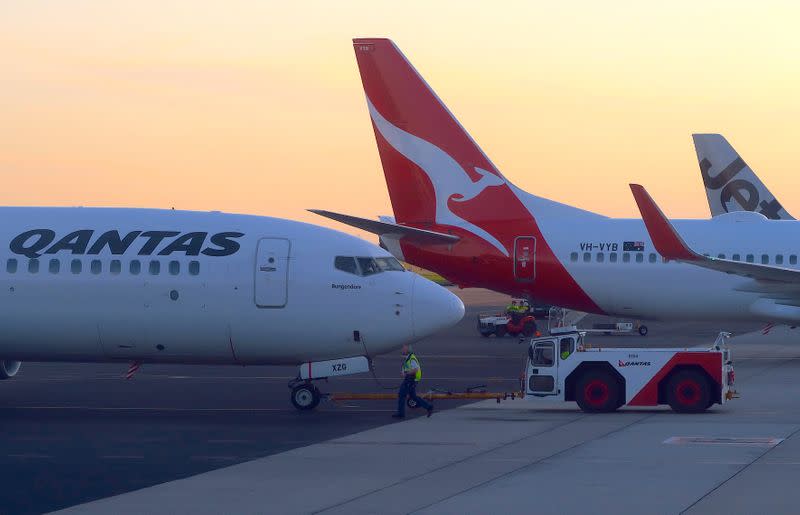 SYDNEY (Reuters) – Australia’s Qantas Airways Ltd <QAN.AX> said state border closures were severely hampering a recovery in the domestic aviation market, which, alongside its lack of international flying, would lead to a significant loss this financial year.

The airline on Thursday posted a full-year net loss of A$1.964 billion ($1.41 billion) for the 12 months that ended June 30, one of its largest ever, driven by impairment charges and restructuring costs meant to help it weather the coronavirus pandemic.

Chief executive Alan Joyce said that trading conditions were the worst in the airline’s 100-year history and that a national framework on when states could open borders was needed to boost domestic flying.

He said it made sense to lock down in Victoria, which has the nation’s highest case count, but not to ban travel between places like Western Australia and South Australia, which are reporting no community tranmission of COVID-19.

“We’re not saying, ‘open the borders’ blankly,” Joyce said. “We’re saying, ‘Let’s have the rules to say what would you have to see in order for those borders to be open.'”

The airline is running only 20% of its usual domestic schedule in August, but he said that could increase to more than 75% if all state borders reopened before international ones.

Most international flying is unlikely to resume until a vaccine is widely distributed, which might occur in mid- to late 2021, Joyce said.

Qantas took about A$2.8 billion worth of one-off charges alongside its results, which included a writedown of A$1.4 billion on its Airbus SE <AIR.PA> A380 fleet, which is parked in the Mojave desert.

Its biggest-ever net loss was A$2.84 billion in 2014, which prompted major cost cuts and led to strong annual profits of about A$900 million for four years before the pandemic.

“We were on track for another profit above A$1 billion when this crisis struck,” Joyce said.

The carrier’s A$124 million underlying pre-tax profit in the 12 months ended June 30, its most-watched financial figure, was well above the A$6.5 million average profit expected by 11 analysts polled by Refinitiv. That was due mostly to a strong first half before the pandemic hit.

The airline in June raised more than A$1.4 billion from institutional and retail shareholders to help it weather the pandemic, announced plans to cut at least 20% of its staff, equating to 6,000 jobs.