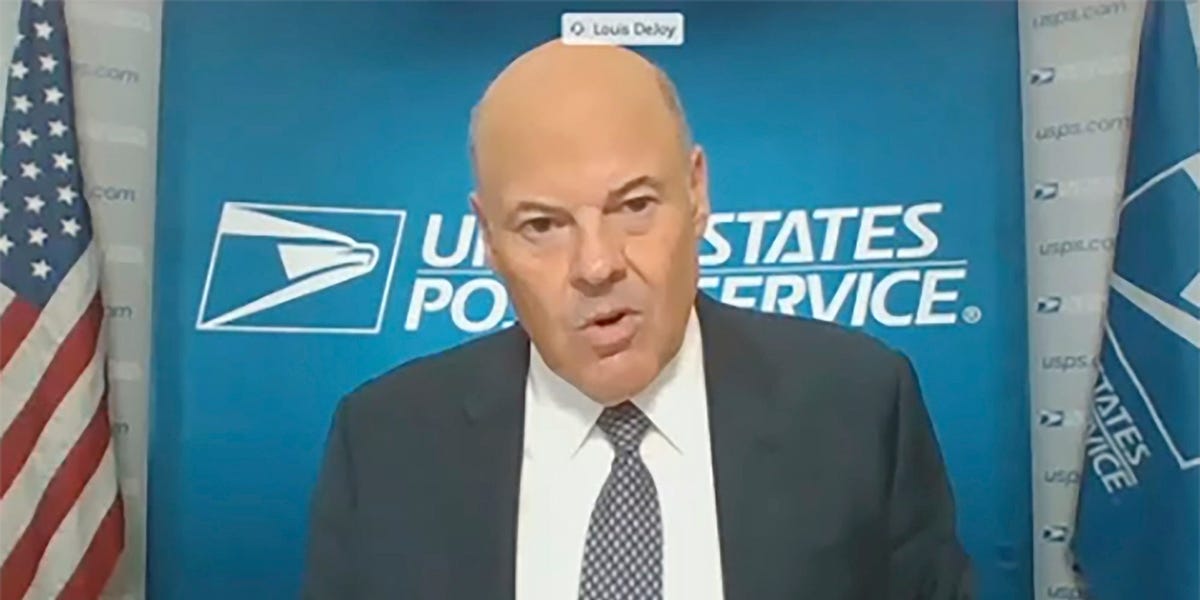 In a Friday hearing before the US Senate, Postmaster General Louis DeJoy publicly broke with President Donald Trump in endorsing mail-in voting as safe and secure, stating that the US Postal Service has the capacity to process mail ballots.

“I want to assure this committee that the Postal Service is fully capable and committed to delivering election mail securely and on time,” DeJoy said in his opening statement. “That sacred duty is my number one priority between now and Election Day.”

DeJoy also directly debunked Trump’s claim that the Postal Service doesn’t have the money or resources to process mail ballots.

“We deliver more than 230 million pieces of mail a day,” DeJoy said. “So 150 million, 160 million ballots over the course of a week is a very small amount, we have adequate capacity. Mail volume is down, as you said, 13%, 14% this year. Plus, as I identified earlier this week, we will have additional resources on standby. So if everyone complies with the mail process that we’ve identified, there will be absolutely no issue.”

During the hearing, DeJoy — who had previously been in lockstep with the president — substantially diverged from Trump and his allies’ posturing on the issue of mail-in voting.

In the last several months, Trump has taken pains to spread false and exaggerated claims that voting by mail is inherently fraudulent and overwhelmingly benefits Democrats. In reality, rates of fraud with mail ballots, while higher than rates of fraud from in-person voting, are extremely low, and there’s no credible evidence that expanding voting by mail hurts or benefits either political party.

In a Thursday morning interview with Fox Business’ Maria Bartiromo, Trump suggested that he would reject emergency funding for the post office over his opposition to mail-in voting in a possible next COVID-19 relief bill before later walking back his comments.

“They want $25 billion — billion — for the post office. Now they need that money in order to have the post office work so it can take all of these millions and millions of ballots,” Trump told Bartiromo, referring to a bailout proposed by Democrats. “Now, in the meantime, they aren’t getting there. By the way, those are just two items. But if they don’t get those two items, that means you can’t have universal mail-in voting.”

In recent weeks, some Democrats have accused DeJoy — a GOP donor and logistics executive who had never worked at the Postal Service before becoming postmaster in general in May — of working in tandem with Trump to sabotage and undermine the election. Some lawmakers have raised concerns about new cost-cutting measures, including limiting overtime and late trips for mail carriers. And despite DeJoy’s assurances, recent mail delays in some areas have already raised alarms that some ballots may come in too late to be counted.

Several GOP senators, including Rob Portman of Ohio, Rick Scott of Florida, and Mitt Romney of Utah, took the opportunity during the hearing to express their support for mail-in voting. In an exchange, both Portman and DeJoy affirmed they’d personally been voting by mail for years.

“I’m going to vote by mail this year, and I’ve voted by mail for a number of years. The Postal Service will deliver every ballot and process every ballot in time that it receives,” DeJoy said. DeJoy is from North Carolina, which allows anyone to vote by mail without an excuse.

“So, you do support voting by mail?” Portman further queried.

“I think the American public should be able to vote by mail, and the Postal Service will support it. So I guess that’s yes,” DeJoy said.

“In Ohio, we’ve had absentee voting for a couple of decades now, no-fault, meaning you don’t have to give a reason, and it works quite well. I vote every year by absentee because I don’t know where the heck I’m going to be,” Portman said, emphasizing that Ohio makes sure it’s “easy to vote and it’s hard to cheat.”

Later in the hearing, Sen. Scott praised Florida’s long-established no-excuse mail voting system, saying, “I think that the Post Office in Florida has done a great job to make sure that it’s worked— I’ve had three elections, and in every one, they’ve worked hard to make it happen.”

Sen. Mitt Romney of Utah, the Republican Senator most critical of Trump, touted Utah’s mail-in voting process, saying, “the postal workers have made our vote by mail system in Utah a reliable and very successful system.” Utah now runs its elections almost entirely by mail by sending every registered voter a ballot.

“Do you have a high degree of confidence that virtually all ballots sent, mailed, let’s say seven days before the election would actually be able to be received and counted?” Romney asked DeJoy. “If people vote within seven days of the election, are you confident those ballots will be received?”

“Extremely, highly confident,” DeJoy responded to Romney. “We will scour every plant each night leading up to Election Day. Very, very confident.”

DeJoy publicly committed to diverting additional resources to processing ballots in the weeks prior to Election Day.

“Effective October 1, we will have redundant resources and aggressive efforts to make sure that everything is moving and flowing timely,” DeJoy said.

DeJoy added that the USPS has had over 50,000 points of contact with election officials since February in an effort to plan for the election. He said the agency is planning a big public-relations and voter-education push, including letters and video public-service announcements, to assure Americans that their ballots will be counted.

Following the hearing, the Postal Service announced the launch of a new election mail website that has information and guidance for domestic voters, overseas and military voters, and election officials.