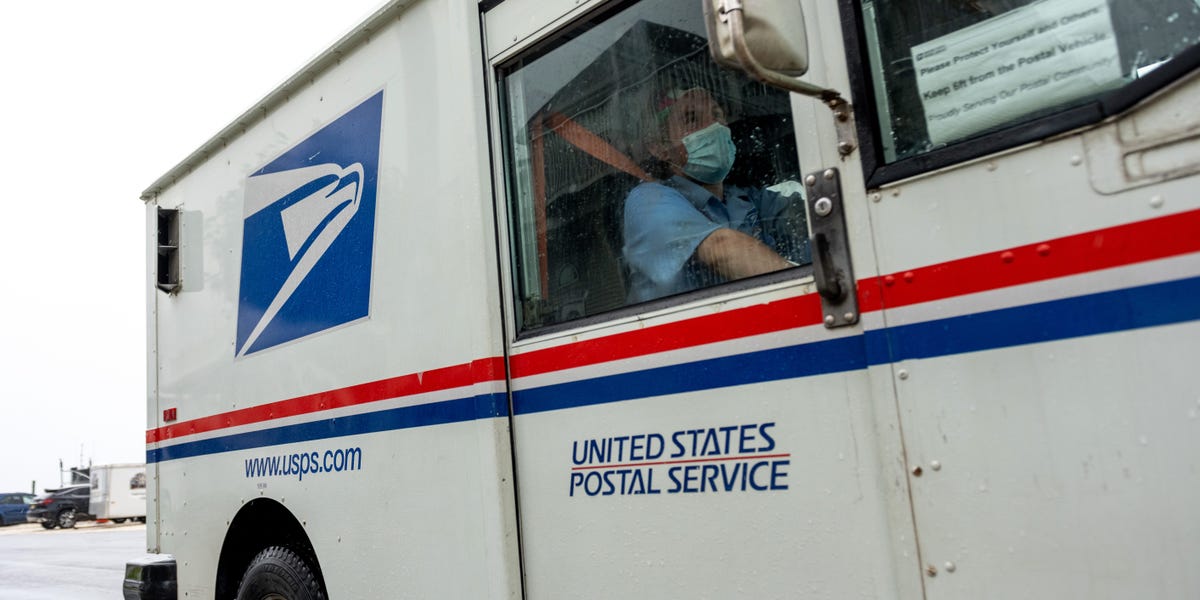 Postal workers are squeezing between mail parcels in dispatch rooms

“It’s been ugly,” Servin, 31, said of the unrealistic pressures for him and his fellow employees to do their jobs.

Paid on an hourly wage at the post office, Servin relied on the overtime hours — often working around 60 hours a week — to support his wife and 4-year-old daughter. He said he needed those hours to cover rent, health insurance, and monthly car payments.

“The minute that the word started coming down from the up top they’re cutting overtime … it became unsustainable for me to support a family,” Servin told Business Insider.

Before he quit his job about a month ago, Servin said his family was “barely cutting it by” as DeJoy — a top donor to President Donald Trump and a major Republican National Committee fundraiser — started implementing drastic changes to workers’ hours.

“All of a sudden [Trump] brought in DeJoy – Somebody who has never carried mail,” Servin said. “He just waltzes right in starts making these changes to sabotage.”

The USPS has seen a stark decline in Americans using the service, and even more so with the pandemic. Between April and June, USPS recorded a net loss of $2.2 billion dollars. DeJoy has responded to financial challenges from low mail volume with a number of cost-cutting measures, including scrapping overtime and late dispatches of mail. He also announced early August a massive reorganization to the USPS leadership structure, amid calls from Democrats to investigate recent changes resulting in delayed mail deliveries.

The USPS did not immediately respond to Business Insider’s request for comment.

For many postal service workers like Servin, overtime hours offer greater financial stability and are essential to providing workers with a time slot to complete mail delivery that isn’t done in regular work hours.

Servin said that losing overtime “just made the post office such a mess,” as workers struggled to do their jobs within a certain timeframe that “just was not achievable.”

R. Richard Geddes, a professor of policy analysis and management at Cornell, told Business Insider the cuts in overtime were inevitable as the USPS has been in a persistent “fiscal bind.”

The USPS had high fixed costs to meet the Universal Service Obligation (a broadly defined set of statues outlining the requirements for USPS such as delivery frequency), in addition to the financial demands cast by the Postal Accountability and Enhancement Act signed in 2006 which required the post office to secure pension and healthcare costs for the next 75 years.

At the same time, the USPS has battled a consistent decrease in the volume of mail since its peak in 2001. The pandemic has only made it worse: USPS reported that between April and June, first-class mail revenue declined by $373 million with a volume decline of 1.1 billion pieces. The National Association of Letter Carriers said in May that the pandemic has declined the letter mail volume even further and that the USPS will likely “exhaust its cash on hand by the end of September.”

“Basically the only thing you can do is to cut costs,” Geddes told Business Insider, referring to the USPS’s struggle to keep running while facing a steep decline in mail volume. “It’s not unreasonable to cut overtime, but what it’s going to do is slow the mail down.”

Mike Stephenson, president of the Pennsylvania Postal Workers Union, said that the slow down in mail delivery is directly linked to the cut in overtime. Mail doesn’t get sorted late at night or dispatched early morning sits in the office until the next day, said Stephenson, 66, who started working in the postal service in 1981 before he recently retired.

Stephenson said the mail piles up and is left in the aisles of the sorting offices, requiring workers to squeeze through the machines and office space while also trying to maintain social distancing guidelines in a pandemic.

“It’s a safety hazard along with everything else right now,” Stephenson told Business Insider.

Once the mail gets dispatched, the carriers face another challenge: with no overtime hours, they can’t reach all the houses in their route in time, Stephenson said. That mail gets delayed to the next day. And the delays compound.

“All of these cuts while they claim to try to help the postal service is only going to hurt this postal service,” Robert Helming, president of the Colorado Postal Workers Union, told Business Insider. “It’s about that disabled veteran getting his medication. It’s about that retired person who is 85 years old has limited mobility waiting on their social security check or their medication in the mail.”

Helming, 53, who has worked in the postal service for 16 years, said that employees are pushed to work in a hurry as management tells them they must leave work and can’t work overtime.

“I get reports from the people I represent that management’s always screaming and yelling at them that they got to work faster,” he said. Helming told Business Insider that the rush could potentially push employees to take dangerous situations like a letter carrier jumping in and out of the vehicle but forgetting to park.

‘Do a better job’

While workers have stressed the value in overtime, restoring it won’t altogether solve issues plaguing the country’s postal service.

Helming said that as a postal service worker, he would like to see increased staffing during the hours of operation. Although overtime would still be needed along with more personnel, Helming added, structuring additional labor around those hours would lead to burnout and worsen the postal service’s high turnover rate.

Overall, Helming said he would like the postal service to “do a better job of communicating expectations and communicating limits on an individual.”

Geddes argued that the regulations over the postal service should be revisited. While the Postal Accountability and Enhancement Act required the post office to pay for retiree healthcare benefits for workers decades into the future, it also restricted its ability to set prices, and “increased political control.” The rule had created an environment where packages were the post office’s only profitable area, as Business Insider previously reported.

Geddes said the US postal services should be commercially freed to make decisions to diversify products and so that “Congress is not meddling in postal management decisions.”

“I’m not suggesting anything radical,” said Geddes, but added that “the non-corporate structure of the United States postal service is out of date.”

Geddes referred to postal services in the European Union as a potential benchmark for the US to provide more agency for USPS to make its own business decisions.

He said they have “commercialized” and “demonopolized” their postal services and suggested the US get rid of the postal service’s monopoly on letters and mailboxes.

Amid the widespread issues at the USPS, Trump defended DeJoy’s leadership, describing the postmaster general at a news conference Saturday as “a very smart man.” He told reporters DeJoy “wants to make the post office great again,” but said, “I don’t know what he’s doing,” when asked about problems plaguing the postal service.

The following day, Democratic leaders requested DeJoy and USPS leadership testify at an “urgent” hearing this week, saying they “must answer to the Congress and the American people as to why they are pushing these dangerous new policies that threaten to silence the voices of millions, just months before the election.”