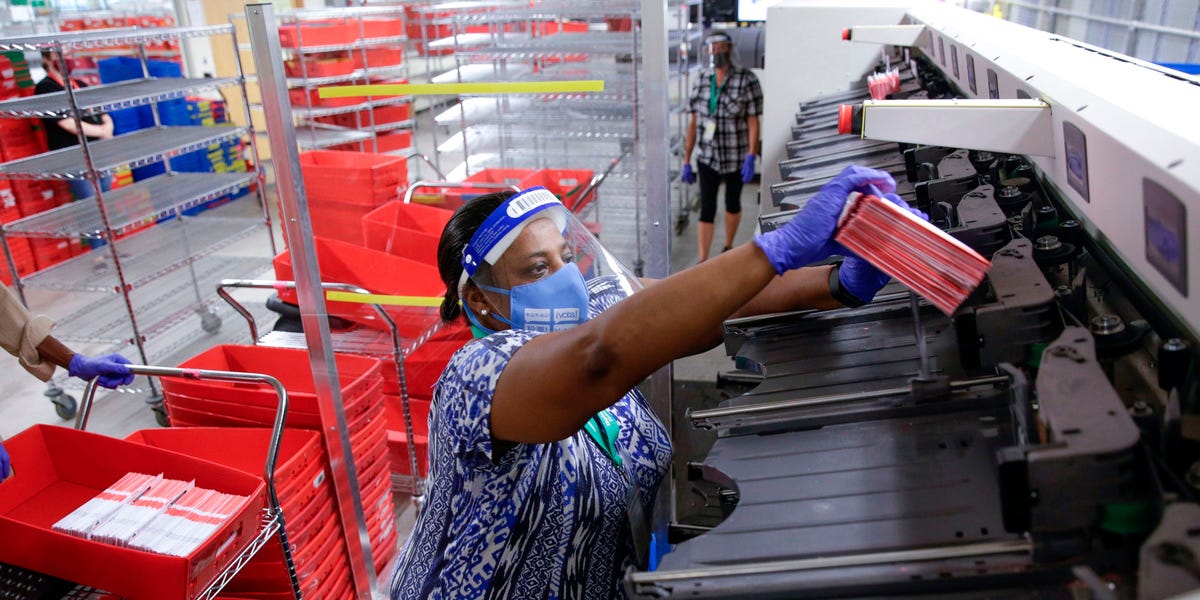 Postmaster General Louis DeJoy is looking to quell a whirlwind of outrage over new changes at the US Postal Service that have slowed down mail delivery, but the high-stakes battle over the future of Postal Service and mail voting is far from over.

A firestorm of controversy erupted around DeJoy, a shipping and logistics executive and GOP donor who had never worked at the Post Office, when he announced new operations protocols meant to cut costs at the cash-strapped Postal Service, which has seen mail volume plummet in the past decade and was hit hard economically by the pandemic.

Despite the Postal Service’s robust capacity for processing mail and their assurances that election mail will represent a small percentage of their total mail volume, systematic operations changes to the agency could still cause delays in the delivery of mail ballots this November, particularly in key swing states central to the election.

Over the past few weeks, high-quality polls in nine of the key swing states likely to determine the outcome of the election revealed stark partisan divides on how voters plan to cast their ballots, finding double-digit gaps between the percentage of Democrats and Republicans who plan to vote by mail in November.

Such a lopsided partisan divide has profound implications for the election results. It means that Americans likely won’t know the winner of the presidential race on election night, and that Trump could lead the vote count on election night but lose his lead to Biden over the next few days as mail ballots are counted.

As some analysts have noted, the discrepancy in which voters are casting ballots by mail means that ballots rejected for either arriving past the deadline or for not being properly signed or sealed could be disproportionately Democratic.

The US Election Assistance Commission’s 2016 Election Administration and Voting Survey (EAVS) found that domestically, 23.7% of voters cast ballots by mail in 2016 and 1% of mail ballots that arrived at election offices were rejected, with 23% of the rejected ballots disqualified for arriving past the deadline.

With anywhere from 40% to 70% of Americans expected to vote from home this November, that number could increase in 2020. An NPR analysis from mid-July found that 65,000 ballots have been rejected in elections so far this year for arriving past their state’s deadline, with thousands more primary ballots since then rejected for late arrival in states like Michigan.

This year, six of the key swing states most likely to decide the presidential election, Arizona, Florida, Georgia, Michigan, Pennsylvania, and Wisconsin, require mail ballots to be received by Election Day, according to VoteAmerica. Other states with key US Senate races, including Maine, Montana, and South Carolina, also require ballots to arrive by Election Day.

“Even if a Florida ballot was mailed well before the state’s receipt deadline, if it is a single day late, the ballot will be outright rejected. Rejected ballots do not count, and voters who cast them are left with no say in an election,” Dartmouth College professor Michael Herron and University of Florida professor Daniel Smith wrote in an op-ed in the Tampa Bay Times, noting that 90,000 ballots arrived on the deadline of election day in Florida in 2016.

“Even a small perturbation in mail deliveries has the potential to wreak havoc on mail-in voting,” Herron and Smith wrote, adding “the risk of even minor mail disruptions is accentuated in a state like Florida, which is known for its razor-thin margins.”

Unrealistic deadlines can also lead to voters being disenfranchised

Ballots can arrive too late not just because of delays to Postal Service but because deadlines set by individual states don’t allow enough time for voters to receive and return their ballots.

Out of the 40 states not sending voters a ballot in the mail this November, 32 states, including the presidential swing states of Georgia, Michigan, North Carolina, Ohio, Pennsylvania, and Wisconsin, allow voters to request their ballots by mail within seven days of the election. First-class mail takes two to five days to be delivered each way, and marketing mail can take three to 10 days to arrive.

On Friday, The Washington Post reported that the Postal Service has notified 46 states that their tight deadlines for ballots don’t account for the amount of time required to deliver first-class mail, raising the risk of some being disenfranchised.

“A state with a deadline on the Friday or Monday before Election Day is institutionalizing failure — voters will never get their ballot in time to mark it and return it in time to count,” a report from election experts at the Bipartisan Policy Center warned in 2016, advising states to better align their deadlines with the Postal Service’s delivery standards.

In 19 states, ballots can arrive after the election if they receive a postmark or a dated stamp on the envelope that cancels postage and prevents it from being used more than once, dated by Election Day.

Some states have already relaxed their requirements, and the state of Pennsylvania has asked the state Supreme Court to allow ballots to be counted if they are postmarked by Election Day and arrive by Friday, November 6. There are ongoing lawsuits in other swing states seeking similar changes.

But postmark deadlines can raise issues of their own. For years before and now during the pandemic, some ballots have been rejected for showing up at election offices without a valid postmark by no fault of the voter.

Most recently, in New York, congressional candidate Suraj Patel successfully fought in court to get the Board of Elections to count thousands of absentee ballots that arrived without a postmark within two days of the election.

There are over 160 lawsuits in court over state-level election laws, and the legal fight over the Postal Service is just getting started.

Almost 20 Democratic state attorneys general and a number of pro-democracy advocacy groups, including the Lawyers’ Committee for Civil Rights Under the Law, are suing the US Postal Service. The lawsuits argue that the new changes violate federal law requiring new policies to be approved by the Postal Regulatory Commission and in some cases, violate the Voting Rights Act of 1965.

Cost-cutting changes that DeJoy announced in July, which included reducing overtime and late trips for mail carriers that allow more mail to be delivered each day, immediately set off a firestorm among Democrats and other concerned advocates.

In a Tuesday statement, DeJoy reversed course and announced he would suspend operational changes to US Postal Service until after the election “to avoid even the appearance of any impact on election mail.”

In particular, DeJoy promised there would be no changes to retail hours at Post Office branches, no more removal of existing equipment or closures of processing facilities, and importantly, that overtime for carriers would be “approved as needed.”

Some of the changes taking place under DeJoy, including the removal and decommissioning of some mail sorting machines and mail collection boxes, were in the works long before DeJoy joined the Postal Service and are a response to a decade-long decline in first-class mail volume.

CNN reported that 95% of the mail sorting machines removed or destroyed in the past several months were already scheduled to be taken out of service. Between 2011 and 2016 alone, 12,000 blue collection boxes have been removed due to low usage, according to the Post Office inspector general’s office. And DeJoy himself clarified to House Speaker Nancy Pelosi that he doesn’t plan on restoring the sorting machines or other equipment that has already been removed.

But DeJoy’s comments, particularly the vague guidance around overtime and late trips, left many Democrats unsatisfied and seeking more direct answers. He’s set to testify before the Republican-controlled US Senate on Friday and before the Democratic-controlled House on Monday.