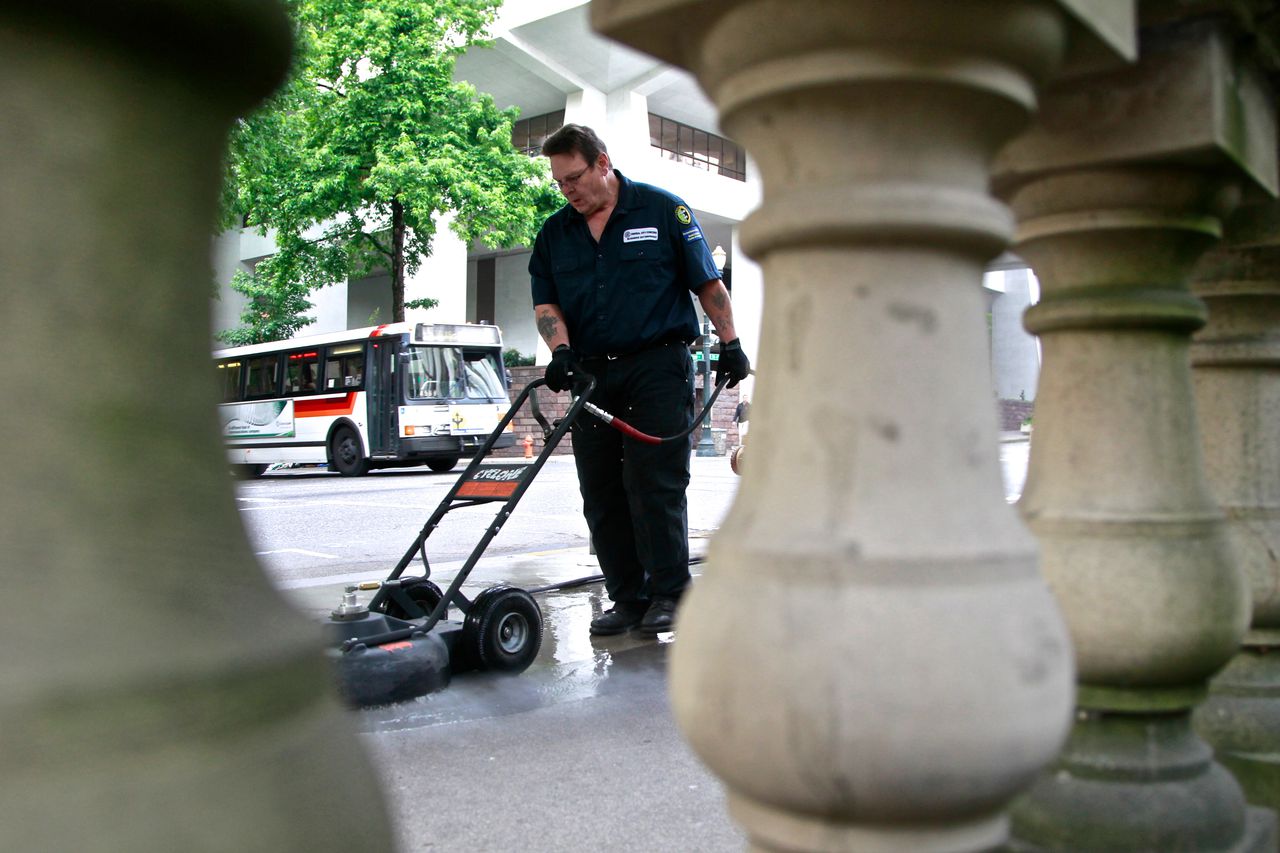 Portland has done almost no oversight of business districts that could criminalize homelessness, city auditor says

The city of Portland has allowed three business districts to pool money for enhanced services, such as transportation and extra police, but has failed to conduct even cursory oversight of those districts, according to a city auditor report.

The result is that people living in and using public spaces in those districts can face unequal treatment because of privately funded security services, according to the report. That can create extra hardship for people living outside because the districts pay for extra Portland police officers, private security and an assistant district attorney — and no city officials review if those enhanced security forces are acting within an appropriate scope of duties.

The auditor also said that at least two of the districts are largely controlled by property and business owners, so renters have little say in how the Enhanced Service District in which they live is controlled.

Enhanced Service Districts are zones where businesses pay an extra fee that is collected by the city’s revenue department. That money is then redistributed to a nonprofit organization that runs the district. In Portland, that nonprofit is the business association that represents the service district zone.

Downtown Portland Clean & Safe is the oldest and best-known of the enhanced service districts, formed in 1988 and run by the city’s chamber of commerce, the Portland Business Alliance.

At the time of its creation, neither Portland nor the state had rules governing how enhanced service districts should work or overseen.

The Lloyd District followed in the early 2000s. Thomas Lannom, revenue division director, said that city officials didn’t see a need for formal governing structures since there were only two districts.

For decades, the city has lost money collecting the fees from businesses for the districts on the high-level administration of the districts with the idea that it is saving money on the public services the businesses are paying for. Lannom said that is why the city has not fulfilled all the duties the auditor said it is supposed to.

Then the Central Eastside Industrial District formed. Lannom said in a response to the audit that city officials now recognize that there should be rules for how districts are created and managed.

As of now, the city approves the districts, collects the fees from district members and redistributes it. The rest is hands off.

Too hands off, according to the auditor.

According to the audit’s review of contracts, the city is supposed to oversee the scope of services provided, review an annual budget and monitor the use of funds via audit. One district’s contract says that the mayor, serving as the police commissioner, will obtain and review reports of police and private security officers’ actions.

The police commissioner is also supposed to review complaints against officers within the district and the investigations into those complaints.

None of that has been done, according to the auditor. However, the mayor’s office said Friday that those report reviews had been done and recently forwarded them to the auditor’s office to clarify that point of the audit.

This has resulted in years of complaints about how homeless people are policed within the districts. Many advocates say that homeless people living in those areas are subject to a higher level of arrest for low-level crimes than those in other parts of the city.

“The fact our local government allows any private entity to patrol, control and dominate public space seriously undermines the ability for all community members to exist in our sidewalks, streets, parks and plazas, which are supposedly open and accessible to all,” said a statement by Stop the Sweeps, an advocacy coalition made up of nonprofits Western Regional Advocacy Project, Sisters of the Road and Right 2 Survive.

Clean & Safe and Central Eastside both use funds to pay for extra security. That includes both private security firms and Portland police officers assigned to the 213-block Clean & Safe district who work together to assign duties and dispatch calls. The Lloyd district does not use its funds for security. But it pays for an assistant district attorney to prosecute crimes within in the district and coordinate safety programs.

“These enhanced law enforcement or criminal justice services create a risk of disparate outcomes compared to other parts of the city,” said the auditor report. “A crime such as public consumption of alcohol that may be ignored in another part of town may result in different consequences in a district with security officers and extra police presence or the district’s access to a district attorney and community courts.”

Clean & Safe Executive Director Maureen Fisher said that the district’s enhanced services are beloved by members who live and work in the district. While the audit focused on the city’s lack of oversight, the the Portland Business Alliance and Clean & Safe both participated.

“We fully support the city looking at ways enhanced services districts can be better and fully serve everyone,” said Clean & Safe Executive Director Maureen Fisher. “We were actively engaged in the audit process and support improvements that help make this distinct program better.”