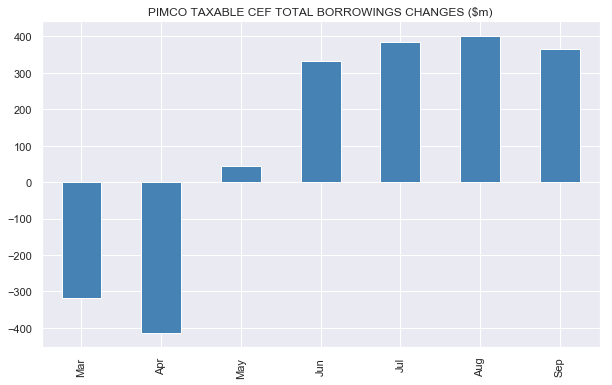 In this article, we take a look at the updated leverage figures of the PIMCO taxable suite for September and what it means for investors. Our main takeaway is that the funds have continued to not only add borrowings but to increase fund leverage levels as well. In other words, the funds have added borrowings at a faster pace than the growth of their NAVs. This, along with low leverage costs, should allow them to maintain strong earning capacity.

However, from a tactical perspective, the funds are currently trading at an elevated premium valuation relative to the last few months. This has caused us to lower our exposure to the funds in our Income Portfolios. An earlier draft of this article expected the PIMCO Dynamic Income Fund (PDI) premium to rise back above that of the PIMCO Dynamic Credit Income Fund (PCI) post its share offering, however, this has already happened even faster than expected. We also continue to hold the PIMCO High Income Fund (PHK) due to its lower leverage as well as low management and leverage costs.

What Happened In September

Most of the exposure was added by three funds, with the rest mostly unchanged. 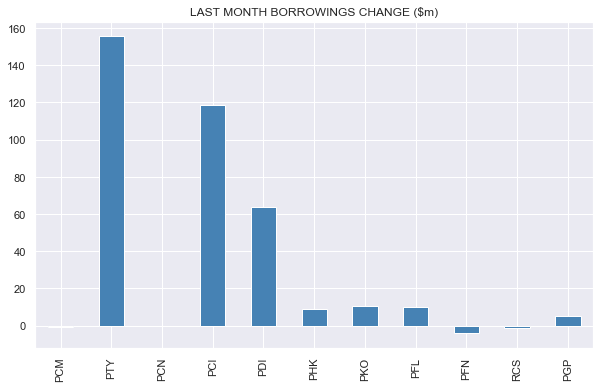 In aggregate, taxable CEF borrowings have increased for the fifth month running. 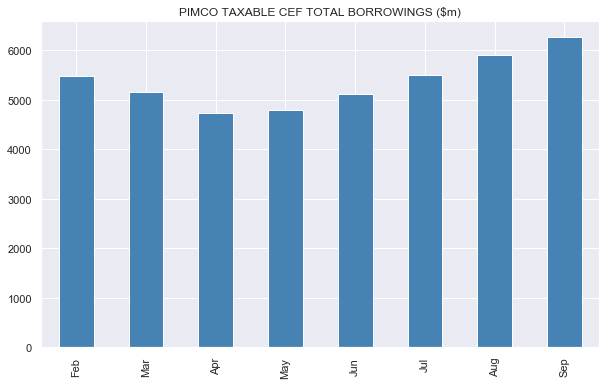 Changes in borrowings are interesting because they give us a sense of the funds’ changing earnings capacity. In this regard, the funds, in aggregate, have grown their income potential significantly above their pre-drawdown level.

In terms of the leverage percentage (that is, borrowings divided by total assets), a couple of funds stand out with sizable increases, while most other funds stayed flat or had only modest increases in leverage. 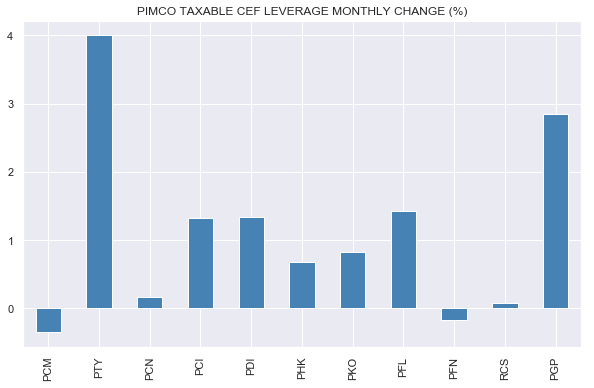 If we look at the average leverage carried across the taxable funds, we see a continued increase towards 40%. 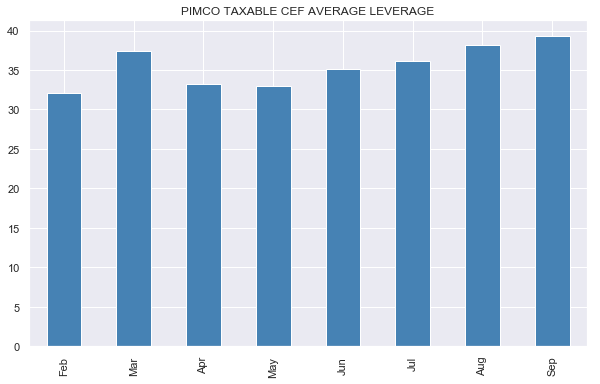 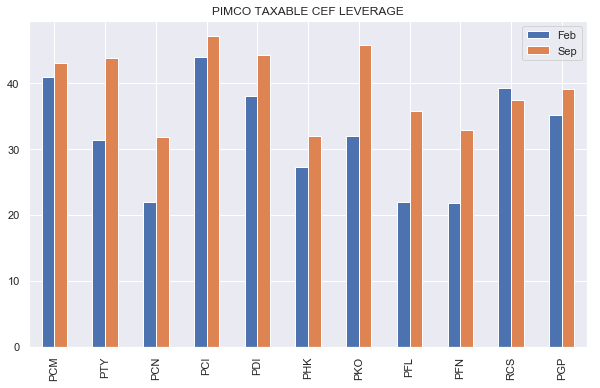 In a sense, this makes a lot of sense for three reasons. First, at the start of the year, the market was arguably more vulnerable to a sell-off. The Treasury curve had inverted, and late-cycle dynamics were clearly visible. 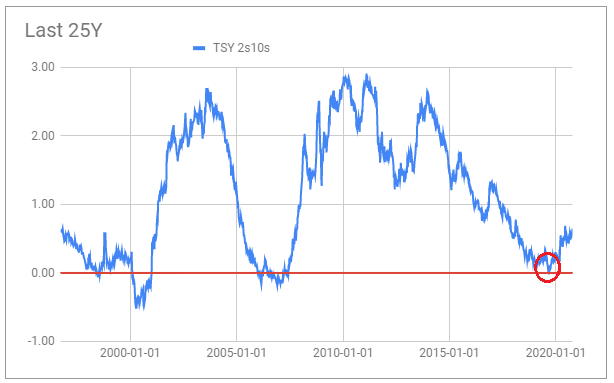 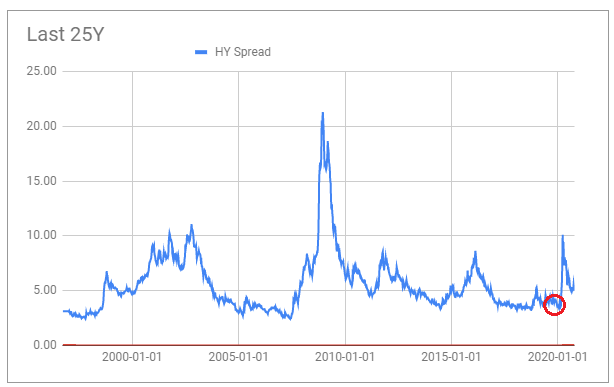 And short-term interest rates were at the highest level of the decade, driving up leverage costs. 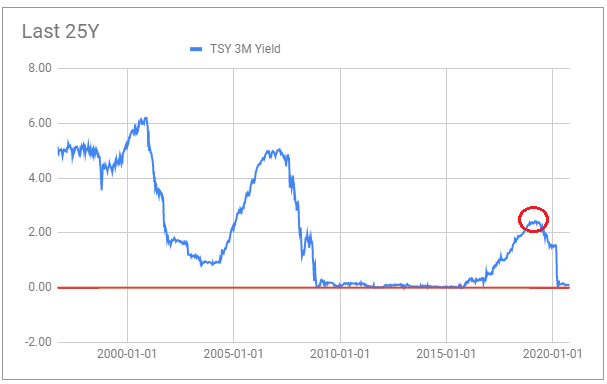 This meant that running the funds at elevated leverage levels was a relatively risky proposition. Not only would the funds be buying expensive assets in a late-cycle environment, but the additional earnings squeezed from them would be limited by expensive valuations and high leverage costs.

The situation now is completely reversed. Arguably, we are currently in an early-cycle environment, having moved through a sharp recession. Underlying asset valuations are not as attractive as they were a few months ago, but are still much more attractive than at the start of the year. And leverage costs are at rock-bottom levels. This makes it entirely rational for the PIMCO taxable funds to run at elevated leverage levels.

So, what’s the downside? The downside of running the funds “hot” is that they are more liable to a forced deleveraging in case of a drawdown. The way we evaluate potential deleveraging is by looking at the funds’ leverage policies versus their current leverage levels.

A couple of funds on our radar in this regard are PCI and the PIMCO Global StocksPLUS & Income Fund (PGP).

The PGP investment mandate in the latest shareholder report states the following:

The fund’s leverage, excluding synthetic borrowings, was 36.9% in September, which is very close to the fund’s cap and doesn’t leave much room even in a mild drawdown. Recall that a drop in the fund’s NAV will mechanically raise its leverage. This makes PGP particularly vulnerable, since unlike the other PIMCO multi-sector CEFs, it holds equity exposure.

Under normal market conditions, the Fund will limit its use of leverage… such that the assets attributable to the use of such leverage will not exceed 50% of the Fund’s total assets (including, for purposes of the 50% limit, the amounts of leverage obtained through the use of such instruments).

Both funds are running very close to these maximum leverage mandates at 3% and 1% under the caps for PCI and PGP, respectively. Prior to the drawdown, the two funds were also trading much closer to their caps than the other funds. And as of September, they are running closer to the caps than they were in February.

The chart below shows that these two funds had among the sharpest deleveragings during the drawdown. This is, no doubt, related to their tendency to run closer to their leverage caps than the other funds in the suite. Investors who are relatively bearish on the market should keep this in mind. 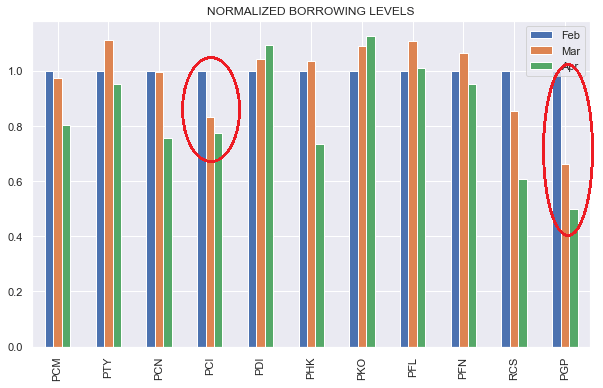 A deleveraging potentially has a double knock-on impact. First, it leads to lower longer-term returns. The chart below shows the 1-year NAV returns of two pretty similar funds: PCI and PDI. The two funds have a similar investment mandate, however, PCI has tended to run at a leverage level much closer to its 50% cap. This forced PCI to deleverage, locking in permanent capital losses, while PDI was actually able to add assets at the same time. 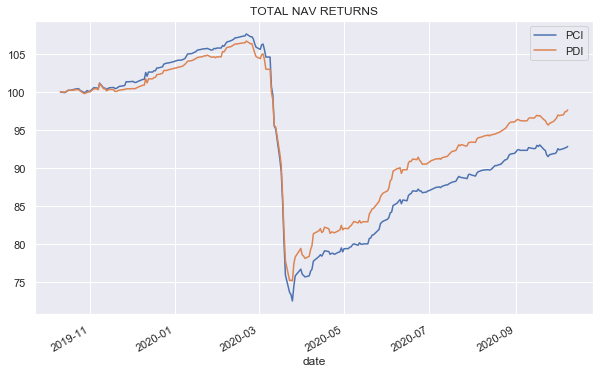 The second consequence of deleveraging is that PCI is still running at a lower level of borrowings than prior to the drawdown despite its elevated leverage level. This has hurt its earning capacity relative to PDI. 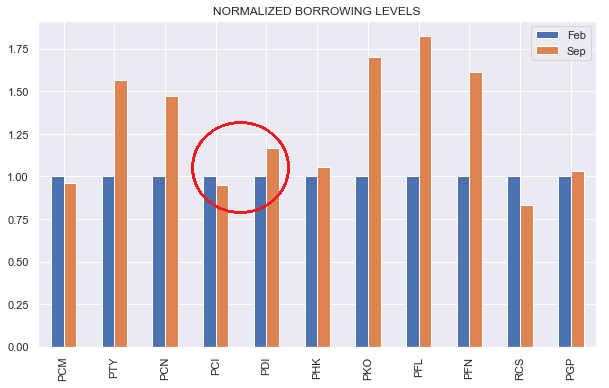 Views Across The Space

As we have commented elsewhere, the PDI fixed-price offering was done at a lower premium than that of PCI. This resulted in a highly unusual situation, where PDI moved to trade at a lower premium than PCI. This only happened recently, very briefly, during the March drawdown. Prior to that, you’d have to go back to 2013 to find PDI trading at a lower premium. As of Friday, the fund has moved back to trade at a higher premium. Somewhat annoyingly for holders of both PCI and PDI, this happened due to the drop in PCI’s premium rather than a bounceback in PDI’s premium. 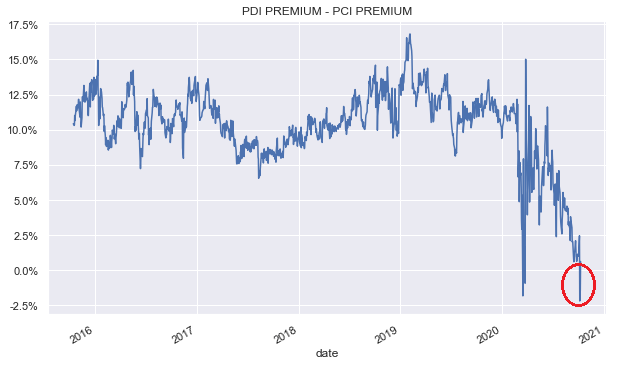 In aggregate, our view is that the PIMCO taxable funds are trading at elevated valuations versus the recent months. This is why we have pared our exposure to the space in our Income Portfolios, rotating into other funds trading at more attractive valuations, without sacrificing income. 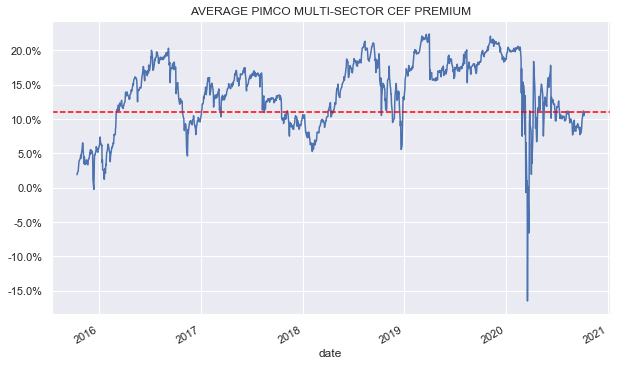 Often, particularly at the early stage of a market recovery, it can make a lot of sense to stay with a CEF whose premium has run up. This is because NAVs can often catch up to the elevated price level. However, with the high-yield credit spreads retracing 80% of their widening, the strong capital gains we have seen since April across fixed-income are less likely to repeat themselves. This means that the NAV growth trajectory has likely leveled off, making it harder for the funds’ premiums to drop solely due to growth in fund NAVs.

Longer-term buy-and-hold investors, however, have multiple reasons to remain with PIMCO funds. First, though fund premiums have grown recently, over the longer term the average fund premium is well within the middle of its historical range. Secondly, the funds’ earnings capacity has increased since the start of the year. Eight of 11 funds are carrying greater borrowing levels. Leverage costs have also fallen sharply. And fund swap portfolios have increased in value, offering funds access to additional income. 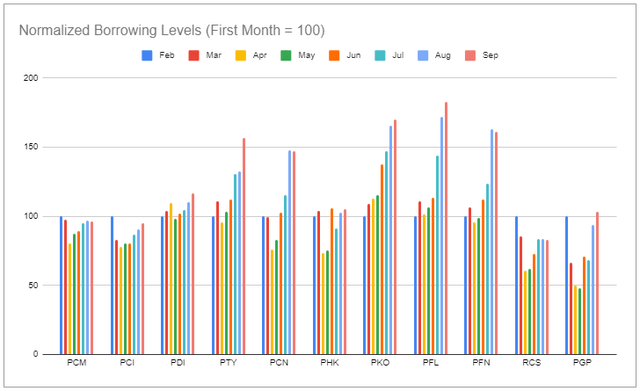 We also continue to like PHK here, though our conviction is somewhat lower than when we added it to our High Income Portfolio at a low-single digit premium. The fund is running at the same borrowing level that it had prior to the drawdown. This, along with a distribution cut this year, has put the fund on a more sustainable distribution path. Its leverage level is a respectable 32% across the larger CEF space, though it is the second-lowest in the PIMCO taxable space, making it somewhat more defensive in the suite. It also has the second-lowest management fee and the second-lowest leverage fee, which allows it to pass on more of its income to investors, while also remaining defensive.

PIMCO taxable CEFs have continued to add borrowings at a strong clip. Fund leverage levels have continued to grow as well, with the average leverage now approaching 40%. The factors driving the leverage increase are likely to be more attractive underlying asset valuations and low leverage costs. This continued re-leveraging allows the funds to boost their earnings levels, but also makes some increasingly vulnerable to a forced deleveraging – a dynamic worth keeping in mind as we approach November.

Check out Systematic Income and explore our Income Portfolios, engineered with both yield and risk management considerations.

Read our Investor Guides: to CEFs, Preferreds and PIMCO CEFs.

Check us out on a no-risk basis – sign up for a 2-week free trial!

Disclosure: I am/we are long PHK. I wrote this article myself, and it expresses my own opinions. I am not receiving compensation for it (other than from Seeking Alpha). I have no business relationship with any company whose stock is mentioned in this article.