We’re more than two-thirds of the way through the Q2 earnings season for the Gold Miners Index (GDX), and one of the last Australian producers to report was Perseus Mining (OTCPK:PMNXF). While fiscal Q3 was a tough quarter for the company with challenges at Edikan throwing a wrench in plans of meeting FY2020 guidance, Q4 was much better, with gold production up 12% sequentially. Unfortunately, Perseus still came up short of meeting its FY2020 production guidance, though we can excuse the company for this due to COVID-19 related challenges. The bigger story is that the company’s new Yaoure Mine remains on schedule for a December gold pour, with this mine able to catapult the mid-tier miner into 500,000-ounce per year producer ranks. Based on Perseus having industry-leading production growth and decent operating performance, I would view any 23% pullbacks as buying opportunities.

Perseus Mining released its Q4 and FY2020 in late July and reported quarterly gold production of 64,700 ounces, up ~12% sequentially from the disappointing Q3 performance. While there’s no reason to applaud a 12% increase in production coming off a quarter of very easy sequential comps, it is a step in the right direction, with the Edikan issues sorted out, it seems. Fortunately, the higher gold (GLD) price has made what should have been a satisfactory year an exceptional one, as Perseus finished the quarter with a net cash position of $14 million despite over $150 million spent on construction at its newest Yaoure Mine. This resulted from a cash flow of $40 million in Q4 and FY2020 operating cash flow of $125 million, allowing the company to absorb the high capex year due to Yaoure. Let’s take a closer look at the results below:

Beginning with the company’s Sissingue Mine, we saw a much better quarter in Q4, with gold production of ~23,400 ounces, up from ~19,200 ounces in the previous quarter. The significantly improved operating results were due to much higher grades in the quarter as mining moved deeper into the Sissingue Stage 2 Pit. As shown in the table below, milled head grades improved from 1.76 grams per tonne gold to 2.42 grams per tonne gold, an increase of 36% sequentially. These grades helped to offset the lower throughput sequentially (314,000 tonnes vs. 370,000 tonnes), while slightly higher gold recovery rates also helped as they increased by 60 basis points. Given the much higher gold production, we saw a solid quarter from a cost standpoint, with all-in sustaining costs coming in at $734/oz, well below the industry average. It’s worth noting that this decrease in costs was despite a minor headwind from higher royalties and higher sustaining capital. 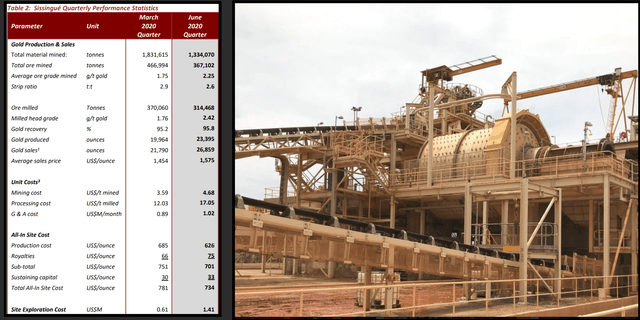 Moving over to the company’s flagship Edikan Mine, this was a critical quarter, as the Q3 results were disastrous given that gold recovery rates fell off a cliff. Fortunately, the Q3 results proved to be just a hiccup, as quarterly gold production rebounded to ~41,300 ounces, a 7% improvement sequentially. The big news in the quarter was that Perseus seems to have solved the Bokitsi ore issue. As we saw last quarter, the high concentration of Bokitsi ore was putting a considerable dent in recovery rates, with recovery rates dropping more than 2,000 basis points sequentially to a pathetic 61.1%. However, gold recovery rates improved substantially in Q4, and while they’re still well below the trailing twelve-month average, it’s a step in the right direction. 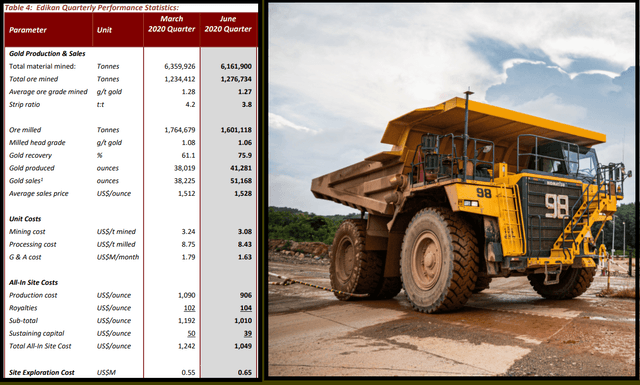 The Edikan plant processed 1.60 million tonnes of ore during the quarter, down from 1.76 million tonnes in Q3. However, this drop in throughput was expected as we saw a higher proportion of harder ore from Fetish being fed to the mill vs. softer ore from Bokitsi. The good news is that although grades and throughput were down due to this adjusted blend in feed grade, gains were made up in recovery rates, which improved by nearly 1,500 basis points. Therefore, while this could have been a better year at Edikan after softness in Q3 derailed the great start we saw in FY2020, the Q4 results were encouraging. Based on the higher gold sales in Q4, all-in sustaining costs improved from $1,242/oz to $1,049/oz, just a few percent above the industry average costs of $970/oz.

Finally, moving over to Perseus’ most exciting project, Yaoure, it was a great quarter in progress made on the construction front. The company noted that Yaoure construction is currently 67% complete, and the team believes they should be able to achieve its stretch target for a first gold pour in December. This is excellent news given the COVID-19 related challenges that have plagued many development projects in the sector with hefty delays. It means that we could see up to 3 months of commercial production from Yaoure in FY2021. Based on the estimated production profile of 215,000 ounces for Yaoure at industry-leading costs of $734/oz, this would have a dramatic impact on Perseus’ FY2021 results, with the real benefit to be seen with a full year of Yaoure contribution in FY2022. Assuming both Sissingue and Edikan can fire on all cylinders going forward, there’s a clear path forward to Perseus becoming a 500,000-ounce producer in FY2022. 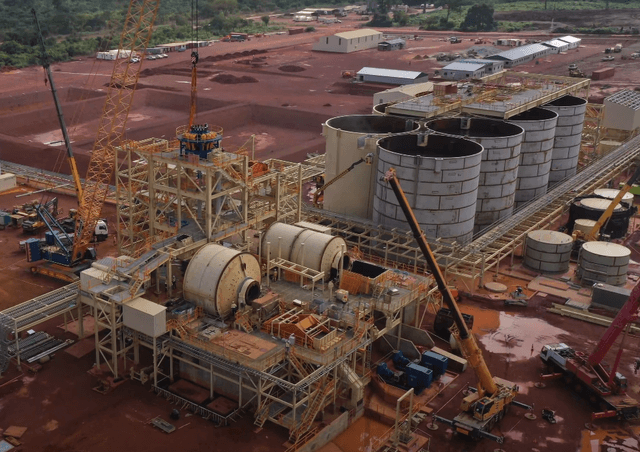 So, what’s the bad news?

The only real negative to the Perseus investment thesis is the hedging that remains in place, which has been a bit of a damper on the average realized gold price. While most of the sector was busy reporting an average realized gold price of $1,700/oz last quarter, Perseus’ average realized gold price was $1,575/oz. Currently, the company has 323,000 ounces hedged over the next three years at an average price of $1,442/oz, and this should weigh on margins a little. However, while this sounds like a lot, it’s actually only about 22% of gold production over the next three years, so while it’s a headwind, it’s not material. It’s worth noting that while this will be an anchor on margins relative to unhedged peers, Perseus should see a tailwind from Yaoure’s lower projected costs, which will mostly offset this hedging. Let’s see how the technical picture looks: 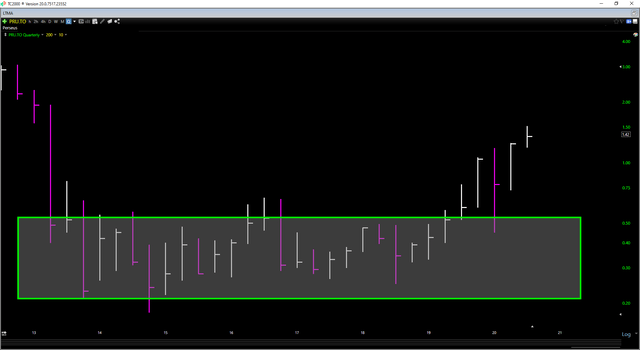 As the chart above shows, Perseus broke out of a massive base just over a year ago and has seen a sharp move higher since. The strong follow-through we’ve seen from this base is a good sign, but we’re now nearly 200% above this base, so I would argue that the easy money has been made here short term. Therefore, while I think the stock has a solid fundamental story, I wouldn’t be in a rush to chase the stock at current levels at C$1.42. Instead, if I wanted to be long the stock, I would be looking to buy any 23% pullbacks, which would bake in a margin of safety in purchases. Based on the recent high of C$1.52, this would translate to a drop closer to C$1.17.

Perseus Mining put up a strong finish to FY2020, but the weak Q3 performance made it near impossible for the company to meet its FY2020 guidance. While this is disappointing, I believe it’s more than forgivable due to COVID-19, and it’s hardly relevant to the bigger picture. This is because the real story here is Perseus’ ability to transform itself from a 270,000-ounce producer into a 500,000-ounce producer within the next nine months, which should be a significant tailwind for the stock. Given Perseus’ industry-leading production growth and a transition to a lower cost profile by FY2022, I believe that any pullbacks below C$1.17 will present low-risk buying opportunities.