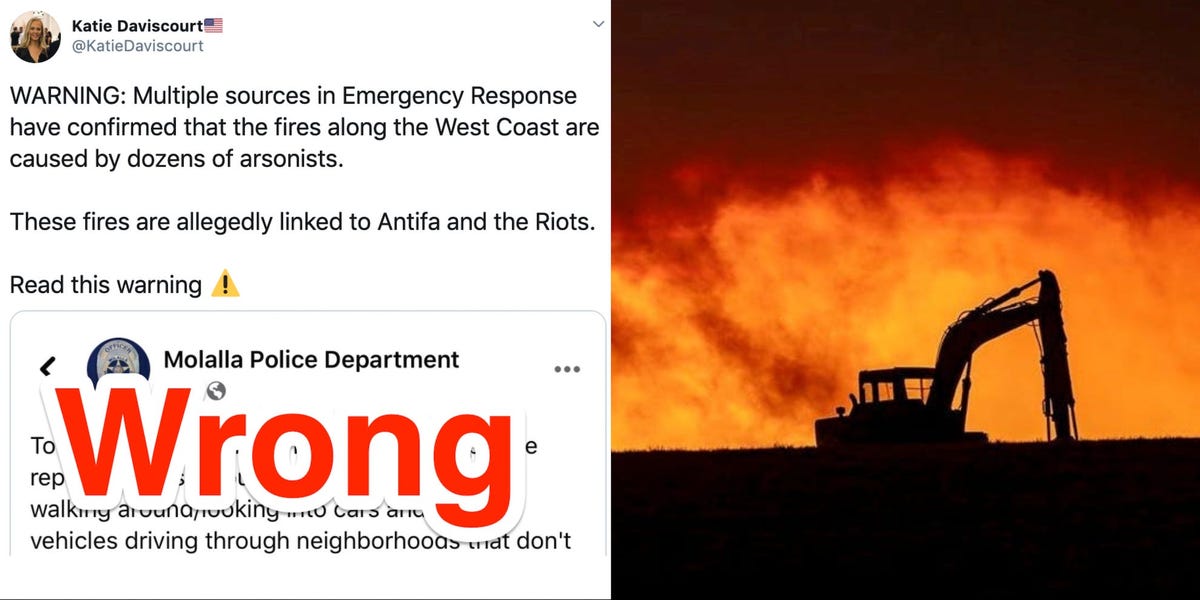 Groundless claims linking both left- and right-wing activists to the raging wildfires in Oregon are continuing to circulate on Twitter, and police forces are scrambling to stop the rumors.

Among the posts that swirled around Twitter and Facebook include a mocked-up police post and tweets by Republican activists, many claiming without evidence are being deliberately caused by members of antifa or the right-wing group Proud Boys.

Some of those posts are still active on Twitter. Business Insider has contacted the company for comment.

For instance, a Wednesday tweet that claimed that “the fires that are happening are a terrorist attack by antifa,” citing what the user called “Police scanner Medford,” is still on Twitter on Friday.

Katie Daviscourt, who described herself as a representative of conservative group Turning Point USA, has also been tweeting similar rumors about the situation in Molalla to her 55,000-plus followers. All of those posts are still on the platform.

In one Thursday tweet, she cited “multiple sources in Emergency Response” to say that the fires along the West Coast “are allegedly linked to antifa and the Riots.”

She included a Molalla Police Department statement, which asked people in the area to “please report any suspicious activity.” The force has since clarified its Facebook statement, saying: “This is about possible looters, not antifa or setting of fires. There has been NO antifa in town as of this posting at 02:00 am [Thursday].”

That tweet has been shared widely, with around 2,900 retweets as of Friday. In a separate tweet on Friday, Daviscourt wrote: “I’m not going to stop reporting on the West Coast ARSONS … Send me everything you got!”

Business Insider has contacted Daviscourt and Turning Point USA for comment, but did not immediately receive a reply from either.

Paul Romero Jr., who unsuccessfully ran for Senate as a Republican in May, also tweeted unfounded claims on Wednesday about so-called antifa involvement in setting fires, saying: “It seems those individuals who have been setting fires in Oregon … well, six of them are in custody. All are antifa.”

The post has been shared hundreds of times. Romero did not immediately respond to a request for comment.

Posts containing rumors about the wildfires have also proliferated on Facebook.

The Medford Police Department in Oregon singled out one post that was designed to imitate the force’s official page, which falsely said that five Proud Boys members had been arrested “with firestarting implements” in connection with the fires.

Medford Police later issued a statement to flag the mocked-up post, and clarified: “We did not arrest this person for arson, nor anyone affiliated with antifa or ‘Proud Boys’ as we’ve heard throughout the day.”

At least four law-enforcement departments in Oregon have issued statements against the misinformation.

In a Thursday Facebook post, the Jackson County’s Sheriff’s Office said: “There are numerous FALSE reports of arrests and other situations over the past days that are the content of postings, fake stories and gossip.”

“Please don’t re-post and spread misinformation based on some unverified random post or meme,” it added. “Rumors make the job of protecting the community more difficult.”

The sheriff’s office in Douglas County also said on Thursday that disinformation has “spread like wildfire” on social media, and that its 911 dispatchers are “being overrun” with queries about antifa members supposedly being arrested for arson.

Police forces in Medford and Molalla have also had to post statements to their official Facebook pages clarifying that the posts are untrue.

So far, five Oregon towns have been “substantially destroyed” by the wildfire, Gov. Kate Brown said earlier this week, and thousands of people have been left homeless, The Oregonian reported.

The Jackson County Sheriff’s Office have opened a criminal investigation into the starting of the fire, Fox 12 Oregon reported.

Some arrests are being made in areas affected by fire: for example, a couple has been arrested in Madera County, California, in the fire exclusion zone with bomb-making materials.

However, Business Insider did not find any official police announcements linking any arrests to political groups.