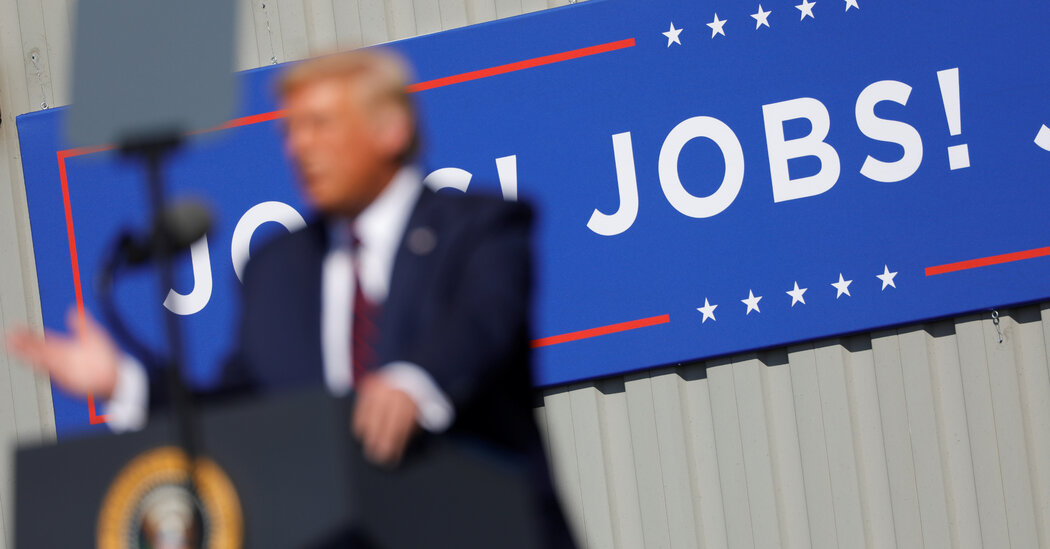 Opinion | The Economic Recovery That Isn’t

As Republicans take the virtual stage for their convention this week, expect to hear much chest pounding about how great the economy has been under Donald Trump’s leadership and how fast it is coming back from the virus-induced shutdown.

Alas, both assertions are untrue.

Without facts, Mr. Trump resorts to lies. He has claimed more than 360 times that the economy on his watch was the “strongest ever.” Not even close. Annualized growth under Mr. Trump ranked seventh among his 11 predecessors. And growth actually slowed during each of Mr. Trump’s three years.

To accomplish only that much, Mr. Trump needed one of the largest tax cuts in history, a cut that grossly favored business and wealthy Americans while exploding our deficit. Almost 85 percent of the benefits of the bill went to businesses and to those with incomes above $75,000.

Americans in the top 20 percent of incomes received a 2.9 percent increase in their after-tax incomes while middle-class Americans got just a 1.6 percent increase. Businesses responded to the cuts by raising dividends and share buybacks to record highs while an initial increase in capital investment quickly faded.

The Trump administration claimed that the legislation would pay for itself through increased economic activity. That, not surprisingly, turned out to be another lie. The deficit jumped to more than $1 trillion last year from $681 billion in 2017, the calendar year before the tax cut.

Then came the virus.

The president’s terrible handling of the crisis directly translated into the enormous problems we now face: an economy in its worst crisis since the Great Depression.

From the start, Mr. Trump has been talking about a quick bounce back and a “V” shaped recovery. In April, his son-in-law, Jared Kushner, said the economy would be “rocking” by July. Less than two months ago, Mr. Trump declared, “America’s economy is now roaring back to life like nobody has ever seen before,” and claimed, “All of this incredible news is the result of historic actions my administration has taken.”

But that’s not what we have. What we have is an economy in shambles.

Our economy has contracted by 10.6 percent during the first six months of 2020, by far the biggest, fastest decline since the Great Depression. Unemployment soared to 14.7 percent. More than 22 million jobs were lost. And the pain was disproportionately felt by women, people of color, the young, lower-paid workers and those with less education. For example, nearly a quarter of jobs held by Americans with less than a high school education have disappeared, compared to only 2 percent of jobs held by those with college degrees.

By almost every metric, Black Americans have fared far worse than whites, including higher rates of closure of Black-owned businesses. And that’s after struggling under the Trump administration since long before the virus hit — Black median household incomes, which were 66.5 percent of those of white households in 2016, had dropped to 62.4 percent of the level of white households by 2018.

These statistics greatly understate the pain. True unemployment rose to nearly 32 percent in April after including all people working part time but seeking full-time jobs and those who were without jobs but wanted one. Even now, well into the promised recovery, 28 million Americans are receiving unemployment benefits.

Job growth in July was less than half the pace of the June increase, and August figures may well show a still smaller increase or — amazingly — no job growth at all. And that’s with only 42 percent of the lost jobs having been recovered so far.

There is evidence that a second wave of layoffs and furloughs is already underway — roughly three out of five workers who had reportedly returned to work have either been let go again or been told they are at risk of being sidelined again.

Much of the damage threatens to become irreversible. According to data collected by Yelp, more than half of business closures that were temporary when the virus outbreak began are now considered permanent. More retailers have gone bankrupt in the first eight months of 2020 than in all of 2008, during the Great Recession. Across all industries, Chapter 11 filings in July surged 52 percent over the same month last year, with no end in sight.

And our economy is in even greater jeopardy because Donald Trump, who proclaims himself the greatest dealmaker in history, can’t make a deal with the Democrats on a much-needed next rescue package.

While the proposals he has tried to bring about by executive action may well be illegal, they are indisputably ludicrous in their construct: A “payroll tax cut” that isn’t a tax cut at all — and even if it were, it would be the wrong way to provide help to the average American. Special unemployment benefits of $300 per week, half the amount lawmakers provided in the first round, the CARES Act. Nothing for schools, nothing for virus testing, nothing for state and local governments.

In the business world, when an employee doesn’t perform, we fire him (although not quite the way Mr. Trump did on “The Apprentice.”)