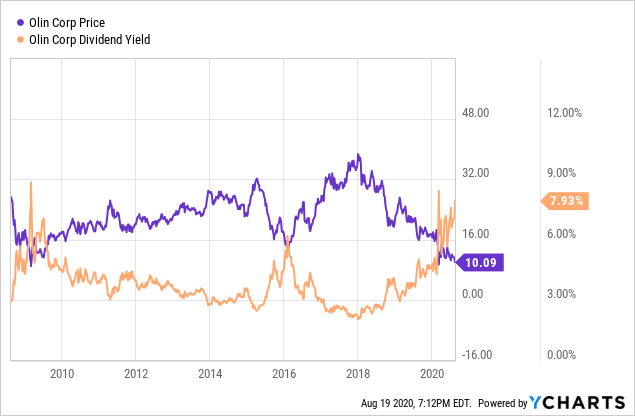 Olin: Holding The Line On Dividend Despite Choppy Q2 (NYSE:OLN)

Since my previous coverage in June, Olin Corporation’s (OLN) share price has been struggling despite the generally bullish sentiment of the stock market, which has been rushing to an all-time high. Among the headwinds that hindered the price from recovering was unexpectedly weak Q2 profit and revenue, which were below the Wall Street consensus estimates, while another chlor alkali heavyweight Westlake Chemical Corporation (WLK) topped both profit and sales expectations. Besides, OLN was downgraded by Bank of America to Neutral, as the third consecutive quarter of EBITDA miss raised concerns if the company has deep profitability issues.

Still, though the second quarter results were deeply depressed, I remain relatively confident the dividend cut will not happen this year or in 2021, given a few matters I would like to discuss below in the article.

Overshadowed by the coronavirus crisis, the second quarter was an exceptionally tough time for Olin Corporation. As the demand for chemicals cratered, its top line was shattered. Commenting on the market trends that led to a 22% reduction in the Q2 GAAP net sales, CEO Mr. Fisher clarified that demand for chlorine, one of Olin’s key products, “from urethane and isocyanates customers represented our largest volume decline during the second quarter.” Moreover, there is no unambiguous answer when precisely the customer confidence will improve (or, put another way, demand for urethanes improves enough to ramp up production and meaningfully increase inventories).

Here it is worth clarifying that chlorine has a plethora of applications, e.g., it is used in the production of TDI (toluene diisocyanate) and MDI (methylene diphenyl diisocyanate), which are, in turn, utilized in the synthesis of polyurethanes together with polyols. In the presentation, OLN shared a table that illustrates the demand trends in the U.S. by an application. The data demonstrate (see slide 4) that in Q2, the demand from inorganics, vinyl, propylene oxide, EPI/resins, and the above-mentioned TDI/MDI applications was contracting. Available 3Q data pointed to the recovery in most end-markets, but MDI/TDI, EPI/resins, and intermediates were still soft.

Now let’s turn to caustic soda, another Olin’s key product. The table gives some precious insights, e.g., it shows that the water treatment, detergents, and organics end-markets had barely noticed the crisis, but alumina had already been flat in 4Q19, and the demand still did not rebound in 3Q20. Apart from that, growth in pulp & paper halted in 3Q, which limits the potential of recovery in overall demand for sodium hydroxide.

Commenting on the NaOH pricing, the CEO said that

… second-quarter 2020 caustic soda pricing in Olin’s system increased approximately 8% when compared to the second quarter of 2020. This trend is expected to continue in the third quarter as Olin’s July caustic soda price was the highest of the year.

it equally likely that Olin’s year-end 2020 caustic soda price will be higher than or lower than our July 2020 pricing.

Certainly, OLN was not the only company that suffered from the caustic soda market softness influenced by lower demand from aluminum producers. Westlake Chemical, another heavyweight, mentioned lower sales volumes of sodium hydroxide as the key culprit that led to the lower Q2 net income.

So, as the market conditions have been deeply challenging and the planned turnaround took a toll, the Chlor Alkali Products and Vinyls segment reported an over 28% decline in net sales and a GAAP operating loss. Being heavily cyclical, Epoxy, the second largest division, also did not emerge unscathed. It also failed to cover the cost of goods sold and operating expenses in full, as the net sales slid over 23% and lower prices of such raw materials like benzene and propylene did not offset weaker revenues. Among other culprits of negative reported EBIT and a 74% reduction in adjusted EBITDA (vs. 1Q20) were highlighted “higher planned maintenance and turnaround costs” (see slide 19).

And expectedly, the only segment that delivered higher sales was Winchester. Its top line inched 22.1% higher, while reported operating income also positively impressed with a 58.4% increase. Explaining what led to such a staggering improvement in operating metrics, Mr. Fisher highlighted “higher commercial ammunition sales volume” together with “improved pricing.” But the issue emerged: though a sharp decrease in inventory largely contributed to cash flows, low inventory will hinder Olin from growing sales volumes in Q3.

However, investors should also keep in mind that Olin is not a pure ammunition business, even though it produces small-caliber ammunition for the U.S. Armed Forces (see page 7 of the Form 10-K) and will assume full operational control over the LCAAP from October 2020. Spikes in demand for commercial ammo surely impact OLN’s top line in a limited way, but the contribution of Winchester to the consolidated revenues is the lowest in the portfolio, and hence, Olin finances its shareholders’ rewards principally using funds generated by the CAP&V and Epoxy divisions. So, an income-oriented investor who purchases OLN receives a stake in a mostly chlor alkali business (with all its pros and cons), not in a pure ammunition firm.

Despite the successes of Winchester, lackluster demand for chlorine and epoxy resins combined with planned turnarounds took a toll on the bottom line. As a result, Olin switched to a catastrophic half-year loss (over $200 million) and negative FCF. When I cover a company’s earnings, I always check if a poor GAAP profit or even loss was a consequence of one-off non-cash expenses, e.g., impairment triggered by economic uncertainty. If so, I remark that these expenses did no harm to cash flows or cash profits, and hence, the situation is not as bad as it might seem upon sophomoric inspection.

Unfortunately, this time I cannot conclude that Olin’s 1H20 and quarterly losses were caused by non-cash costs that reduced shareholders’ equity but were harmless to cash flows. The essential issue was slumped net revenues. As the top line cratered, Olin’s ability to cover opex and COGS deteriorated, so, despite the reduction in receivables and inventory, the 1H20 net CFFO plummeted to $55.4 million. Capital expenditures were sharply cut, but such small cash from operations failed to cover them in full. H1 FCF amounted to $(111) million (before $461 million in payments under ethylene long-term supply contracts to Dow Inc., (DOW) which I discussed in my article on Dow published a few weeks ago). The conclusion is simple: because of the economic turmoil, Olin was not capable of covering the dividend organically in 1H20.

In the previous article, I discussed OLN’s dividend coverage in the 2010s, highlighting that later in the decade, its DPS coverage by organic FCF improved materially, except for LTM (ended March 31, 2020), which were overshadowed by the trade war and the coronavirus. So, in 1Q19-1Q20, it covered only 67% of the dividends paid. And the 1H20 dividend was not covered at all.

Expectedly, to shore up liquidity, it issued debt. In 1H20, the company borrowed $1.16 billion and repaid $426 million; e.g., in May, it issued $500 million of 9.5% Senior Notes due in 2025 (and I should remark here that the coupon is extremely high, so, it seems a hefty risk premium was factored in). Olin has already been significantly leveraged, and in Q2, its Debt/Equity even increased, reaching a decade high of 186%. Moreover, its debt required $122.3 million in net interest paid in 1H20 (or 63% of H1 adjusted EBITDA vs. 23% in 1H19), which surely complicated dividend coverage (see the cash flow statement, page 8).

So, the leverage is high, 1H20 FCF was negative, but it seems unlikely that management is pondering an option to cut or suspend the dividend, thus breaking the 375-quarter-long history of shareholder rewards. Here it is worth citing the answer of the CEO to an analyst’s question on the dividend:

I would say if you look at all of it in over a long period of time, we recognize and the Board recognizes that it’s a cyclical company. And there are points in time where the dividend is a very key component of shareholder value. And the Board is looking at this company and the dividend over the long-haul as it has done, I’ll speak for myself, for at least the last 35 years. So and that’s the view. I don’t have any sense that it is creating an issue as it relates to our borrowing capacity or anything like that.

So, I reckon that management is confident that the tailwinds from the full operational control of the U.S. Army’s Lake City Army Ammunition Manufacturing Facility together with optimization of working capital will help the company to weather the downturn.

With a 1.96 Quant Rating, Olin Corporation is at the bottom of the sector

To sum up, regarding the SA Quant Rating, Olin is a Materials sector laggard. Almost all its grades are poor, from Profitability to Growth. The silver lining is that Value Grade is A-, which means OLN is one of the cheapest stocks in the sector.

And as Olin’s share price is hovering close to the level last seen during the Great Recession and the dividend yield is approaching an all-time high, I reiterate my bullish rating.