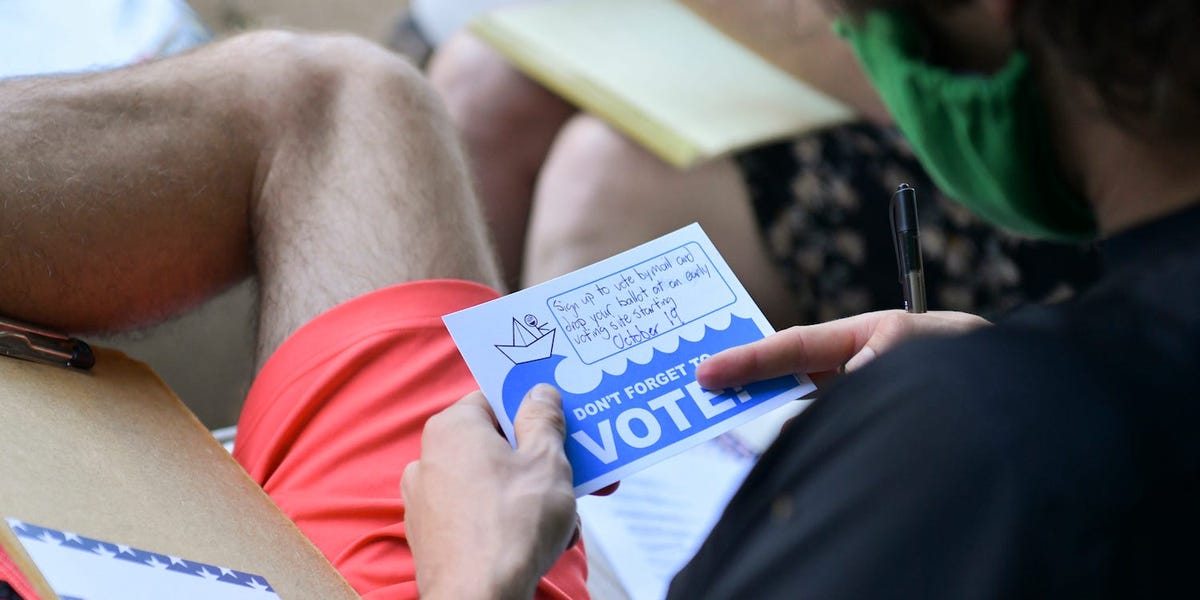 Voters in North Carolina are receiving absentee ballot request forms that feature President Trump’s face on them even though the president has continuously criticized mail-in voting in the run-up to the November election.

The mailer, which was sent by the North Carolina Republican Party, requests “immediate action” to “ensure your right to securely vote Absentee.”

It features a picture of a smiling Trump, with the words: “ARE YOU GOING TO LET THE DEMOCRATS SILENCE YOU?”, followed by “ACT NOW TO STAND WITH PRESIDENT TRUMP.”

Voter Chandler Carranza of Gaston County, who received the mailer earlier this week, told CNN that his wife asked him: “Is this a joke?” when she opened the brochure revealing Trump’s face.

“The irony is very thick and definitely not lost on me,” Carranza said, according to CNN.

“Trump has been saying mail-in ballots will bring fraud to the election but absentee ballots are legit. Which is it? It can’t be both ways. I laughed because if the campaign actually took information from other times they have reached out to me, they’d know I won’t vote for Trump despite being a registered Republican,” he added.

Carranza is not the only person who received the mail. Other people in the state have taken to social media to report being sent the same brochure.

The president has criticized mail-in voting for months, baselessly asserting that it will lead to voter fraud.

Trump has also said that using mail-in voting is less secure than absentee voting, creating confusion about the difference between the practices.

While every state uses a different term, both mail-in voting and absentee-voting mention the same method of using the mail to deliver ballots to voters, The Washington Post clarified.

Deputy national press secretary for the Trump campaign, Thea McDonald, told CNN that the mailer shows how the campaign “is working to ensure voters in every state know how their state’s sorting system works so that every eligible voter can cast their ballot and have their vote counted.”

“President Trump has consistently and rightly said that where a voter cannot make it to the polls, they should request an absentee ballot,” McDonald said, according to CNN.

“The president has also correctly distinguished between chaos-ridden universal mail-in voting systems, like the one that led to California’s train wreck primary, and traditional absentee mail voting systems, like the tried and true system in North Carolina—a distinction Democrats and many in the mainstream media purposely ignore to sow confusion,” McDonald added.

This week, Postmaster General Louis DeJoy and some GOP Senators publicly broke with Trump by endorsing mail-in voting as a safe and secure method.

“I want to assure this committee that the Postal Service is fully capable and committed to delivering election mail securely and on time,” DeJoy said in his opening statement to the US Senate on Friday, according to Business Insider. “That sacred duty is my number one priority between now and Election Day.”