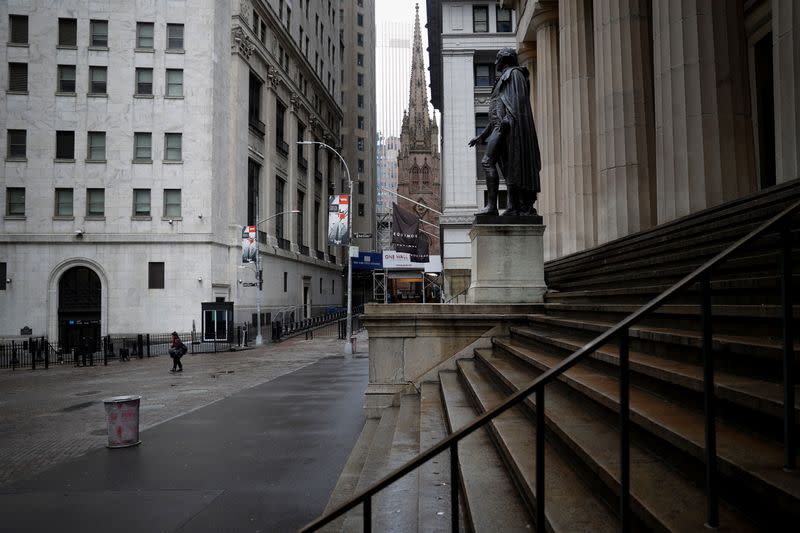 No elk or trout, but Fed’s virtual retreat may stoke market’s ‘animal spirits’

By David Randall and Karen Brettell

NEW YORK (Reuters) – Investors could get a hint from Federal Reserve Chairman Jerome Powell next week about how aggressively the U.S. central bank will try to manage the long-term recovery from the coronavirus pandemic.

Powell will discuss the Fed’s monetary policy framework review – a review it has been undertaking for nearly two years into how it conducts monetary policy – on the opening day of the Kansas City Fed’s annual symposium on Thursday.

Since the 2007-2009 financial crisis, Fed chiefs have used their keynote speaking appointment at the conference – not being held this year in the hunting and fishing resort of Jackson Hole, Wyoming, for the first time in nearly four decades because of the pandemic – to signal important shifts in monetary policy or the economic outlook.

The market backdrop this time around could hardly be less dramatic. Spurred by Fed buying of assets, stocks have recovered their entire pandemic-related losses and are trading around record highs, while bond yields have been near record lows.

“The stock market is telling you there is asset price inflation occurring when there is still a lot of underlying weakness in the economy. I think the Fed is unlikely to view that as a signal of success on policy and, therefore, decide there is nothing more to do,” said Tony Rodriguez, chief fixed income strategist at Nuveen.

A major question – particularly ahead of the Fed’s September policy meeting – is whether the central bank will shift its inflation targets to an average, which would allow inflation to run higher than previously expected before interest rates are raised.

“We fully expect that they are going down the path of average inflation targeting,” said Bob Miller, head of Americas Fundamental Fixed Income at BlackRock.

Investors have been increasing their bets on inflation in reaction to the roughly $9 trillion in stimulus measures from central banks worldwide. Gold, a popular hedge against inflation and a falling U.S. dollar, is up 28% for the year to date and near record highs, while the dollar has fallen close to two-year lows.

Benchmark 10-year Treasury yields hit near record lows of 0.504% earlier this month, before backing up to 0.638% after a rash of Treasury supply.

Real yields for the notes, which show yield returns after adjusting for expected inflation, dropped this month to a record low of minus 1.11%.

The shift to looking at an average measure of inflation would be a “big deal” and help the central bank avoid the same negative interest rate policies adopted by central banks in Europe and Japan, Miller said.

The Fed is trying to spur inflation over the next several years in order to prevent a deflationary spiral as the global economy struggles to right itself from the COVID-19 shock.

“The Fed is rightly concerned about the unstable economic recovery so far and the degree to which we still need to absorb the job losses over the last five months,” said Gene Tannuzzo, deputy global head of fixed income at Columbia Threadneedle.

An average inflation target would allow inflation to make up for the periods in which it fell below the Fed’s target. The Fed, like most central banks, shoots for 2% inflation but has failed to meet that target for most of the past decade. With interest rates near historic lows, the central bank has fewer ways to help stimulate the economy.

Minutes from the Fed’s July meeting released on Wednesday showed that one tool to keep borrowing costs low – yield curve control – was likely off the table for now, but some think that the Fed could shift some of its buying to longer-dated debt.

Investors will also likely be looking for signs that the Fed is exploring additional ways to support the global economy should a stimulus package fail in Congress, Rodriguez said.

“If we get to a point where there is no stimulus package and no additional unemployment support, then the Fed will definitely feel like they have more to do,” Rodriguez said.

2020-08-22
Previous Post: Brazil Prosecutors Accuse Two in Alleged Petrobras-Maersk Corruption Scheme | Investing News
Next Post: Extra $300 Stimulus Unemployment Payment: Who Will Get It and When?