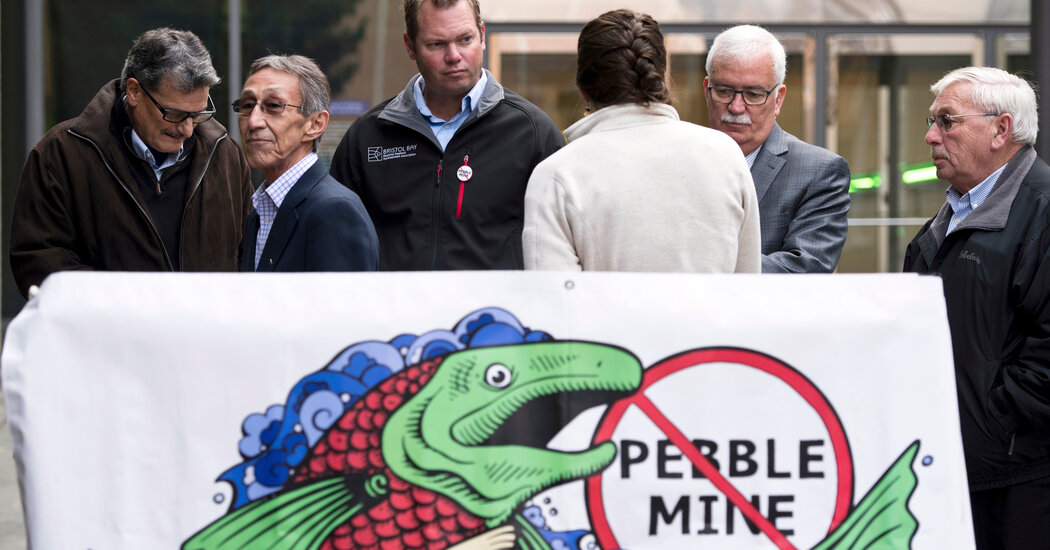 WASHINGTON — The Army Corps of Engineers will impose new demands for mitigating environmental damage from a vast proposed copper and gold mine in Alaska, potentially delaying approvals for the project beyond the presidential election, three people familiar with the Corps’s plans said on Saturday.

The Corps is expected to send a letter on Monday to the developers of the Pebble Mine project, these people said, adding that it will not issue a permit until the company presents plans to protect an area in the surrounding watershed, a critical breeding ground for salmon, equal in size to the acreage that the mine would damage.

That requirement could significantly slow a project that had been sailing toward approval until it incurred the opposition of President Trump’s son, Donald Trump Jr., as well as Vice President Mike Pence’s former chief of staff, Nick Ayers. If Joseph R. Biden Jr., the Democratic nominee, prevails in November, the project is likely to die.

“The mine will be close to killed by this,” said Whit Fosburgh, the president of the Theodore Roosevelt Conservation Partnership.

Mark Meadows, the White House chief of staff, has personally reassured Pebble Mine officials that the move will not scuttle the project, according to another person familiar with the matter.

The proposed Pebble Mine, in a remote region about 200 miles from Anchorage, would be one of the largest open-pit mines in the world and could potentially produce hundreds of billions of dollars’ worth of metals. But it would be dug near pristine spawning streams that support subsistence fishing by some Alaska Natives, a large sport-fishing industry and one of the biggest commercial wild salmon fisheries in the world, in nearby Bristol Bay.

Blocked by the Obama administration but revived under President Trump, the project was the subject of an environmental review by the Corps of Engineers, which issued a final report last month and promised a final permitting decision that, by law, must come at least 30 days later. The report found that the project would not lead to “long-term changes in the health of the commercial fisheries in Bristol Bay.”

But since the final review was published, the president’s eldest son and some high-profile Republican donors have joined environmentalists and some Alaska Natives in opposition.

Tom Collier, the project’s chief executive, said he had known for weeks that the Corps would send a letter seeking the new plans.

“We’re working out the details of a mitigation plan,” Mr. Collier said, adding that he was “95 percent confident” that the permit process would not be delayed past the election.

The move to require mitigation near the mine site is a change from what the Corps had previously sought, Mr. Collier said. The company had previously proposed to provide wastewater treatment plants and other infrastructure for some of the Native villages in the area, miles from the mine.

Mr. Collier said he believed the White House would not intervene.

“This is a president who during his campaign and his first term has repeatedly made the commitment that he would not allow Obama-type political interference in permitting,” he said. “I just don’t see this president doing it.”

Thomas J. Pyle, the president of the Institute for Energy Research, an organization that supports the use of fossil fuels, said: “It appears there is an organized last-minute push to persuade Trump to put the brakes on the mine. He should resist.”

He added, “It is a small subset of wealthy hunter types.”

One of those “hunter types” is the president’s son, however.

Chris Wood, the president and chief executive of Trout Unlimited, a conservation group that opposes the mine, said: “There’s a reason there’s a pause, so that the president or his designee has a chance to weigh in. There’s nothing extracurricular that’s going on here.”

Meantime, Mr. Wood said, “a crescendo of voices” was rising to oppose the project.

This month, the younger Mr. Trump, who has fished in the Bristol Bay region, seconded a Twitter post from Mr. Ayers asking the president to stop the project, adding, “The headwaters of Bristol Bay and the surrounding fishery are too unique and fragile to take any chances with.”

Since then, others who are believed to have influence with the president have weighed in against the project, including the Fox News commentator Tucker Carlson and Johnny Morris, the chief executive of Bass Pro Shops.