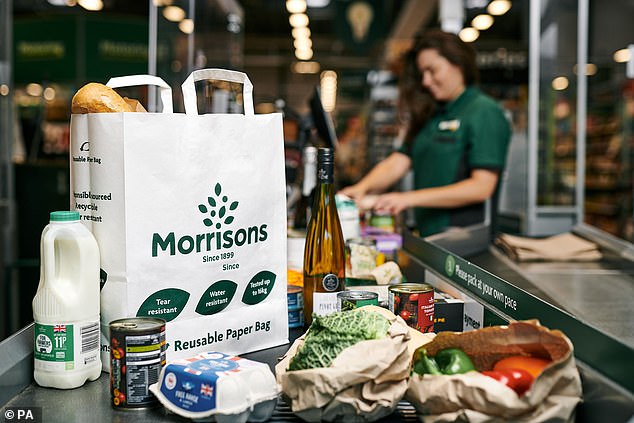 Morrisons customers will now be able to do their entire weekly food shop on Amazon’s website as the online giant steps up its assault on the British grocery market.

The supermarket chain has enjoyed a close relationship with the web company after it started wholesaling fresh, chilled and frozen food to Amazon in 2016, before a same-day delivery service was then launched on the Prime app for subscribers.

Now Morrisons has launched a dedicated platform for its products on Amazon.co.uk, attracting millions more customers who will be able to buy items picked directly from its supermarket stores, rather than using a warehouse.

The scheme, which will initially start in Leeds, will allow all customers who use the Amazon website to buy groceries using the ‘Morrisons on Amazon’ shop, which bosses say make the delivery partnership ‘more accessible’ to customers.

Through the partnership, Amazon Prime customers will still be able to receive free same-day deliveries on orders over £40.

This perk, initially for customers in London and the south-east, was added last month to replace the previous system where Prime members – who already had to pay £7.99 a month – needed to pay an extra £2.99 for a food order.

Shoppers previously had to spend £40 to get food delivered from the Morrisons website, and not all parts of the country were covered.

They then also have to pay as much as £5 extra to have goods brought to their door, with fees varying depending on location and the time of the delivery.

Doug Gurr, Amazon UK country manager, said today: ‘The launch of Morrisons on Amazon means increased visibility for Morrisons’ incredible service and selection, as well as an even greater choice for our customers.’

Morrisons also operates a larger grocery delivery business directly through its own website, which is fulfilled through a distribution deal with Ocado.

It said the expansion with Amazon is also ‘complementary’ to its on-demand delivery service it launched with Deliveroo in April.

David Potts, Morrisons chief executive, said: ‘Morrisons on Amazon will build on our partnership with Amazon, making our good quality, great value food even more accessible through Amazon.co.uk and the Amazon app.

‘It will give more and more customers the option of receiving Morrisons groceries straight to their doorstep, including freshly prepared products from our brilliant Market Street colleagues.’ 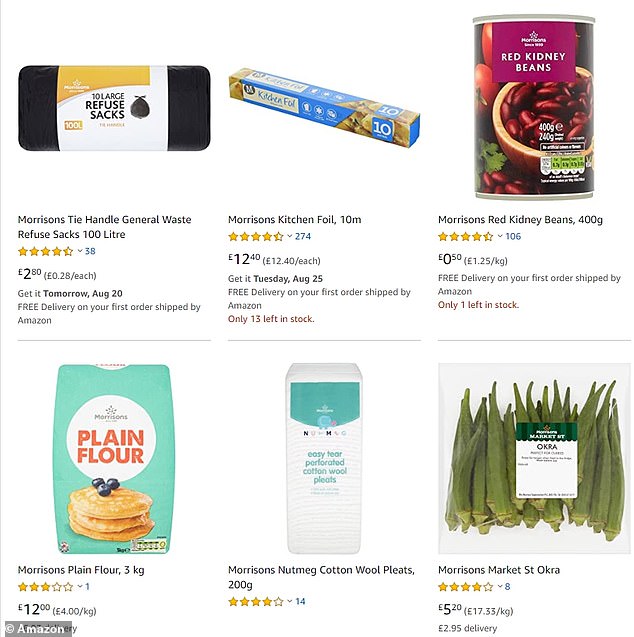 The supermarket chain has launched a dedicated platform for its products on Amazon.co.uk, attracting millions more customers who will be able to buy items picked directly from its supermarket stores

It is being seen as a significant power move from Amazon, with retail analyst Richard Hyman claiming UK supermarkets will be ‘rightly nervous’ as the giant wades into the grocery market.

‘Now it’s not going to dominate the UK grocery market any time soon because there’s rather a lot of players in it already who are actually pretty good at what they do. But I think we shouldn’t be under any doubt that they will capture a material slice of this market.

Online supermarket wars! Some now deliver the same day due to the pandemic – but which offers the best value for speedy convenience?

British supermarkets have adapted to the huge spike in demand for online ordering thanks to the coronavirus pandemic with most now offering a same day delivery service – with some promising to get shopping to you within an hour.

In response to the coronavirus crisis, where many didn’t leave their homes to go shopping, supermarkets had to work to ensure that those who need a food delivery wouldn’t be left waiting days on end to find a slot online.

This meant introducing speedier delivery services and more options for customers who are now less willing to physically go in store, who perhaps have turned to the online services for the first time. 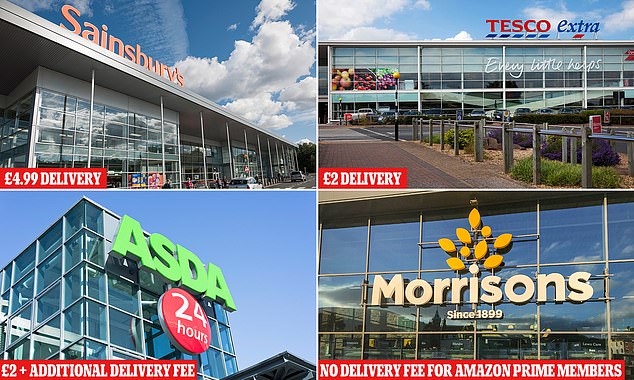 Meanwhile, next month will see Ocado team up with Marks and Spencer to offer deliveries for the first time – M&S agreed a £750million deal with the brand, which will see it ditch Waitrose.

Which supermarket offers the best value for speedy delivery? This is Money reveals how much the different services cost – and which firms are offering the largest number of delivery options.

Sainsbury’s has recently introduced a new one hour delivery service for customers struggling to get their food shopping.

The Chop Chop scheme promises to deliver up to 20 items from the supermarket to your door in 60 minutes or less.

Customers must order off the Chop Chop app and spend a minimum of £15 before ordering, plus a hefty £4.99 delivery fee.

Launched at the beginning of April in select cities, customers can then track their order on the app to see when it is being prepared and when it is en route. 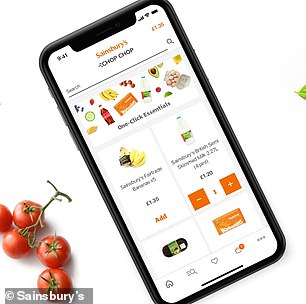 Sainsbury’s has introduced a Chop Chop service, delivering within an hour of ordering

This means the service is available to some 3.2million households.

If successful, it is likely to be rolled out in further locations across the UK.

Clodagh Moriarty, chief digital officer at Sainsbury’s said: ‘We are doing everything we can to feed the nation and offer our customers quick, convenient and safe ways to get their groceries.

‘By rolling Chop Chop out to 50 stores in 20 cities across the country, even more customers can get what they need delivered to their door.’

Since the beginning of April, Sainsbury’s said it has more than doubled the number of customer orders it can fulfil, with delivery slots typically all booked by 10am.

By bringing the offer to 50 stores across the country Sainsbury’s said it will increase capacity by a further 400 per cent.

The Chop Chop scheme is in addition to its normal delivery and Click and Collect service. 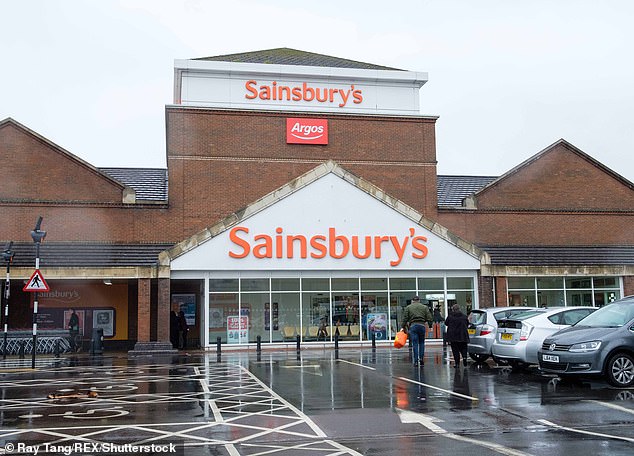 Asda has partnered with Uber Eats to offer customers a rapid delivery service to the doorstep in as little as 30 minutes.

The trial, which launched last month, from stores in Leeds and Birmingham, gives customers a choice of over 300 Asda own-brand products and branded everyday items for speedy delivery including ready meals, fresh fruit and vegetables and beer, wine and spirits.

Customers can shop in the same way as they would when ordering from a restaurant via the Uber Eats app.

M&S and Ocado team up

Marks and Spencer have teamed up with online grocer, Ocado, with the firm expected to deliver M&S goods to households from 1 September 2020. 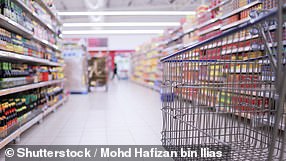 It will be replacing Waitrose, who currently has a deal with Ocado and has done so for nearly two decades.

M&S began listing its products on Ocado’s site earlier this month, saying it will list 6,000 items compared with the 4,000 products currently on Waitrose’s website.

It has developed 750 additional lines for the launch, including ‘bigger pack sizes’ and ‘more cupboard staples to better cater for family shoppers’.

Those who still want to stick with Waitrose will now be able to order their shopping directly from the store’s website, instead of at Ocado.

Once confirmed, the order is picked in-store by Asda colleagues before being collected and delivered by a courier using the Uber Eats app.

There is no minimum basket size needed to qualify for delivery and if successful, the partnership may be extended to more Asda stores later this year.

As with most other Uber Eats orders, the delivery cost is likely to depend on how far away from the store you are – the further away, the more expensive the fee.

Simon Gregg, vice president of online grocery at Asda, said: ‘We’re pleased to be partnering with Uber Eats to trial a rapid grocery delivery service for customers in Leeds and Birmingham.

‘Customers can use the Uber Eats app to select from hundreds of items for delivery in the same way they would shop for a takeaway.’

The supermarket has also introduced an express click and collect and extended the same day delivery scheme.

With the same day delivery service, consumers can order items before 12pm for delivery after 3.30pm on the same day which is available to UK addresses seven-days-a-week.

Same day click and collect, meanwhile, means consumers can place an order for collection and pick up in four hours.

This will be the price per slot, depending on what time, plus a £2 fee. 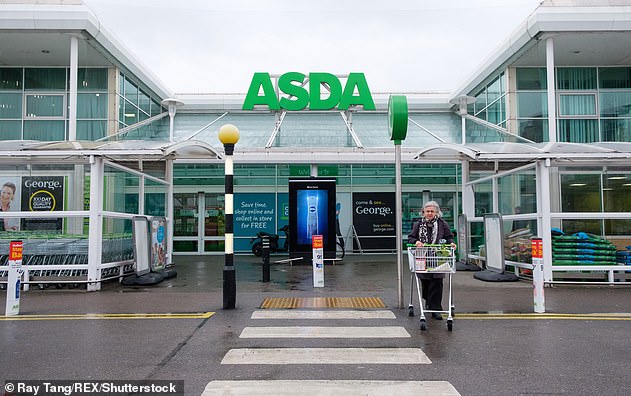 Tesco is also offering a same day delivery service in certain locations across the UK.

Consumers can check whether they are in an area served by Tesco on the supermarkets website.

Those who can access the service must order before 1pm for delivery after 7pm and the service is not available on Sundays.

There is a £2 charge for all customers unless they are a Delivery Saver customer which means they pay monthly instead.

It is also offering its standard delivery service and a Click+Collect which costs £1.50 to cover the ‘pick and pack’ charge. 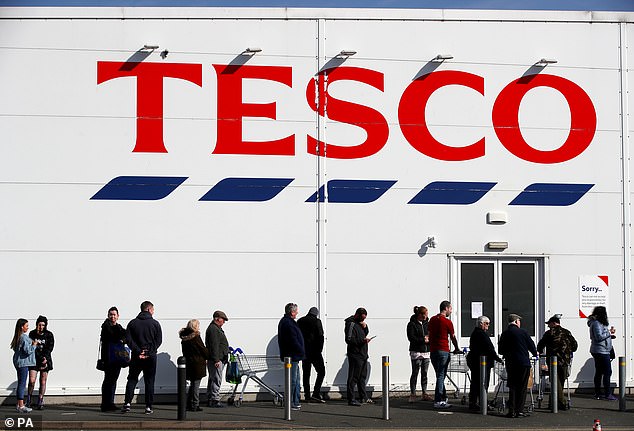 Both Aldi and Lidl have risen greatly in popularity during the past couple of years thanks to their low prices.

However, Lidl doesn’t currently offer home delivery in the UK, so customers looking to shop at the budget chain must do so in store.

Aldi, meanwhile, does offer home delivery nationwide but only on a selected number of items and crucially, not including groceries.

Instead customers can order wine, spirits and home and gardenware on the store’s website.

This does exclude large and high value items which will cost £6.95 for delivery no matter how much is spent.

However, it is now trialing a partnership with Deliveroo in 11 new stores, with locations in London, Greater Manchester and Cambridge.

It means customers living near 20 stores in England will now be able to choose from around 200 essential Aldi groceries online, then have them delivered to their door in as little as 30 minutes.

If successful, the Deliveroo service could be rolled out across more stores in other towns and cities across the UK before the end of the year.

There is a small delivery fee that varies depending on how near the store you are.

Customers must spend a minimum of £15 to get delivery and can use the Co-Op website or the Deliveroo app.

Those shopping in store can also get free home delivery if they spend £25 or more in store.

They can pick up a card from the special terminals in selected stores and register for home delivery.

Then they must choose a time slot for delivery and get a ticket. After finishing shopping as normal, customers hand over their ticket at the checkout and the Co-Op will take your shopping home. 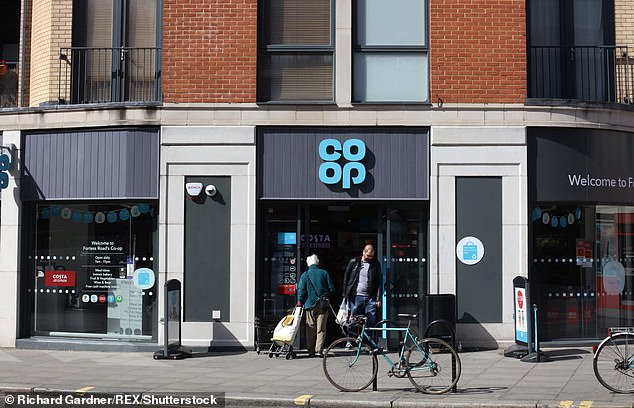