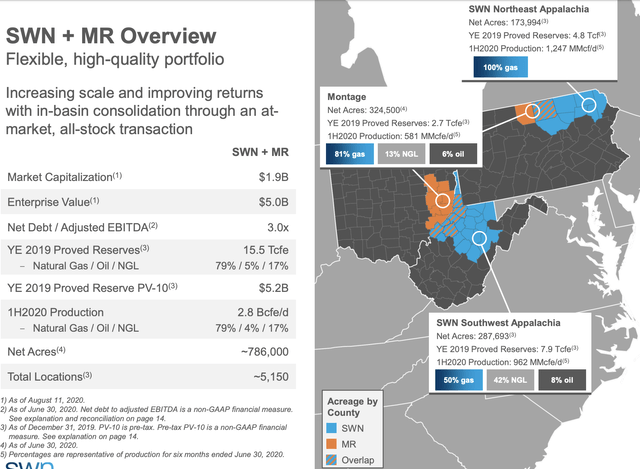 On August 12th, news broke that Southwestern Energy (SWN) would be acquiring Montage Resources (MR) in an all-stock transaction aimed at growing Southwestern’s Appalachia presence and generating what it hopes will be significant synergies for shareholders in the process. The move has been viewed with mixed feelings from investors, but at the end of the day the transaction is a logical one. Upon an assessment of Montage, though, it seems like its shareholders are walking away leaving a great deal of value on the table. In all practicality, Southwestern should have paid significantly more for the business and the fact that it ended up not doing so is a testament to the value that its shareholders are getting from the deal. Investors in Montage, meanwhile, should find themselves incensed at this development.

A look at the deal

The transaction between Southwestern and Montage is fairly straightforward. In exchange for each share of Montage that investors currently own, they will receive 1.8656 shares of Southwestern. As I type this on August 14th, with shares of Southwestern having closed at $3.08 and shares of Montage at $5.76, the deal represents value for Montage’s investors of $5.75. At the time the deal was initially announced, the implied price for Montage’s stock was $5.97, representing essentially no premium to the recent trading activity of the firm. Following the completion of the transaction, Southwestern’s investors will own about 90% of the combined company, while Montage’s investors will have the remaining 10%.

The completion of this transaction will significantly grow Southwestern’s presence in the Appalachia region. In all, the combined company will have 786,000 net acres there, which will include 324,500 net acres contributed from Montage. Where Southwestern has acreage located in the Northeast (where it produces only natural gas), and in the Southwest (with 50% natural gas, 42% NGLs, and 8% oil), Montage’s acreage is mostly just North of Southwestern’s Southwest acreage and provides significant acreage overlapping.

Management expects this move will help to generate attractive synergies at the end of the day. In all, it expects to see at least $30 million in annual run-rate general and administrative savings. That is just what it has identified. There is also the potential for other operating synergies as well, especially given the acreage overlap that occurs in both of Southwestern’s Appalachia concentrations. However, management has not provided any sort of guidance as to what that might look like. Both parties expect the deal, which is contingent on shareholder approval, closing sometime in the fourth quarter this year.

It is worth mentioning that as part of this arrangement, Southwestern has decided to initiate an offering of stock. The firm is issuing 55 million shares of itself, priced at a rather low $2.50 per unit, plus it’s offering up 8.25 million shares to its underwriters. In all, gross proceeds are expected to total $158.13 million. Management’s goal is to redeem at least some of the $510.5 million in Montage’s 8.875% Senior Notes due in 2023. If this comes to pass, it could create immediate annual interest savings of $14.03 million, but it’s unclear if the firm will redeem the max possible. For this reason, for the rest of the article, will assume that these savings are not realized since putting a number on it would be speculative.

Southwestern got an excellent deal

Based on my review of Montage, it’s clear to me that Southwestern is getting one heck of a deal from this transaction. Using current share prices, the company is paying $207.13 million for the equity value in Montage. The business does have significant debt, $670.5 million in all set against just $9.23 million in cash and cash equivalents. This brings the firm’s EV (enterprise value) up to $868.41 million.

Taking Montage’s latest guidance, which was provided earlier this month when the business announced its second quarter earnings results, I calculated the data illustrated in the table above. It shows the EBITDA, operating cash flow, and free cash flow of the firm for its 2020 through 2024 fiscal years. This assumes that energy pricing and output remain unchanged each year moving forward. For the purpose of our analysis, I will emphasize this year’s financial results as well as 2023’s and 2024’s since those two years show the company without the benefit of any hedging.

On an EV/EBITDA basis, the multiple being paid for Montage by Southwestern at this time is 3.93. That is for this year. Without hedges, this multiple rises to 4.91. This is still quite nice in the grand scheme of things. Its market cap / operating cash flow multiple, meanwhile, looks to be a paltry 1.51 this year and 2.23 in a world without hedges. If we assume, instead, that management at Southwestern is able to capture $30 million in post-tax run-rate synergies, the EV/EBITDA multiple for this year falls to 3.46, while for an unhedged Montage it drops to 4.20. Its market cap / operating cash flow multiple, meanwhile, is just 1.24 and 1.68, respectively.

No matter how you stack it, this deal looks to be a slam dunk for Southwestern. The company is absorbing a fellow business on the cheap as illustrated by its trading multiples, and that assumes that we don’t factor in the interest savings. It also doesn’t take into consideration the fact that energy prices will likely rise from here. At the moment, I’m assuming that crude is priced at $40 per barrel, while natural gas is priced at $2 per Mcf. Energy prices will be volatile, but if we find ourselves at $50 per barrel for crude and $2.50 per Mcf for natural gas, this will turn from a home run to a grand slam for Southwestern’s investors. Montage’s shareholders will benefit from synergies and they will benefit from the stability of a larger business, but considering that a multiple may be twice what Southwestern paid for Montage was probably reasonable, they should be frustrated by management’s move.

Crude Value Insights offers you an investing service and community focused on oil and natural gas. We focus on cash flow and the companies that generate it, leading to value and growth prospects with real potential.

Subscribers get to use a 50+ stock model account, in-depth cash flow analyses of E&P firms, and live chat discussion of the sector.

Sign up today for your two-week free trial and get a new lease on oil & gas!