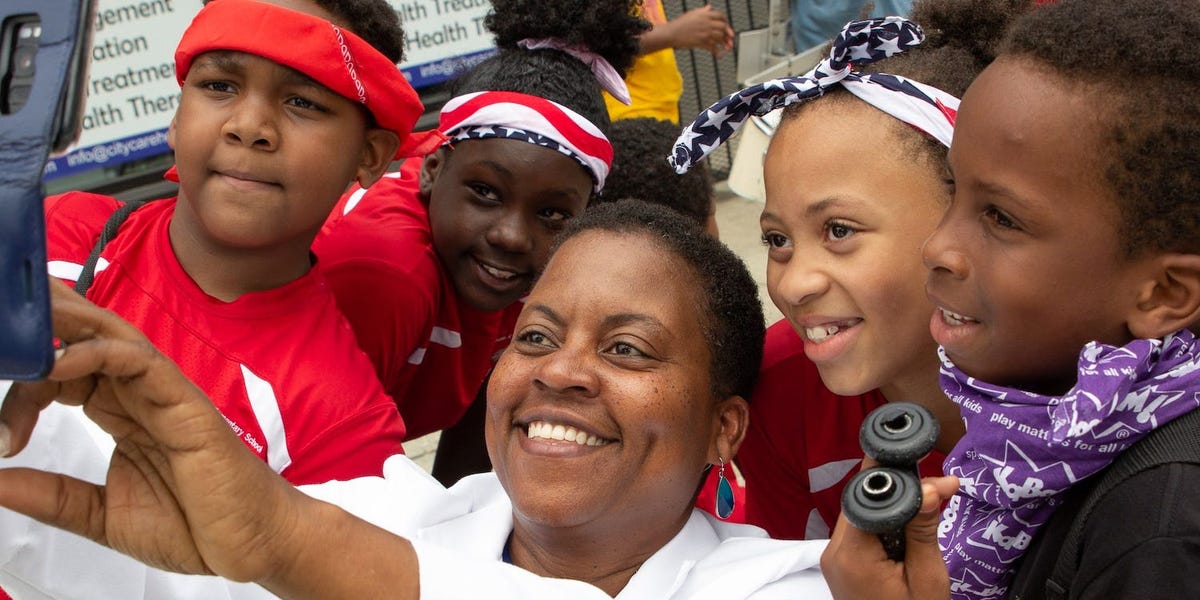 ANACOSTIA, DC — Dressed in a white lab coat on a sweltering July afternoon, Dr. Lisa Fitzpatrick is speaking privately with a middle-aged man who’s at a loss about how to get treated for a medical problem.

After finishing the conversation, Fitzpatrick won’t disclose the condition but says it’s easily treatable. The treatment has been widely advertised in public health campaigns and commercials. The man missed all of those messages, but was able to get the right information because Fitzpatrick is standing on the sidewalk in one of DC’s poorest neighborhoods.

Whenever she’s here, people most often ask her questions about the coronavirus, where to find a dentist, and how to sign up for Medicaid, the government’s health insurance for low-income people.

Fitzpatrick is standing in front of a table she set up with hand sanitizer, masks, and a temperature check. She uses an organ model to demonstrate how the coronavirus enters the body and has people provide their cell phone numbers to receive health information.

It’s a typical afternoon for Fitzpatrick, the CEO of Grapevine Health. She’s here to find out where people are getting their health information. As with much of healthcare, there is a lot of misinformation circulating about the coronavirus.

People’s health suffers when they have the wrong information, can’t get ahold of the truth, or don’t know how to follow advice. Before the pandemic, the problem was estimated to cost the US healthcare system as much as $238 billion a year.

“The misinformation is always rooted in a kernel of truth,” Fitzpatrick said. “And by the time it spreads on the grapevines — or people hear bits and pieces, and then they talk about it on the street corner and at the dinner table — it morphs into something completely different.”

About a year ago, it was Fitzpatrick’s passion for helping people get accurate medical information that grabbed the attention of a key Democratic healthcare strategist.

Now, Fitzpatrick, 52, is one of five healthcare policy committee co-chairs for Joe Biden, the presumptive Democratic nominee for president. It’s an influential, coveted slot that not only shapes campaign messaging but lays the groundwork for a transition team and governance should Biden’s campaign be successful.

While Fitzpatrick didn’t take questions about the campaign, she let us see her work at Grapevine and discussed her more than two decades in healthcare. According to a document The New York Times made public, policy teams must keep campaign work confidential.

Read more: A top Biden adviser who helped craft Obamacare shares his plan to replace the ACA and why he thinks the coronavirus pandemic could help push major change

Fitzpatrick started her medical career at the CDC

Her story, said Chris Jennings, a longtime Democratic healthcare strategist, would be hard to be viewed as anything other than “central casting” for a campaign. It was a story that, when Jennings heard it for the first time about a year ago, would eventually lead him to recommend Fitzpatrick to the Biden campaign.

“She gets to the heart of the matter quicker than many,” said Jennings, who is also a healthcare policy co-chair for the campaign. “She does not waste time. If she’s going to say something, there’s going to be a reason to say it. She has little tolerance for verbosity without substance. She seems very outcomes-oriented and cause-focused.”

She spent a decade at the Centers for Disease Control and Prevention, first working as a “disease detective” in the same program that’s now responsible for tracking and containing the coronavirus. Later, she was CDC’s health diplomat in the Caribbean for its global AIDS program and was founder and director for the CDC’s Minority HIV/AIDS Research Initiative.

She came to DC in 2008 to teach at Howard University College of Medicine.

That’s when, she said, she began revisiting a question that had been nagging at her: How could doctors become more accessible to people to help them understand health information? In 2012, she started an infectious diseases treatment center.

“She’s just somebody who comes up with great ideas before other people have them and really just goes for it. She doesn’t wait,” said Erin Yeagley, a nurse practitioner who worked with Fitzpatrick at the health center and now at Grapevine.

The program covered almost 265,000 people at a price tag of $2.8 billion a year. Yet, she said, people were still in poor health and patients weren’t using the services available.

That had serious consequences. When patients didn’t understand or couldn’t get instructions from doctors they’d stop taking medication, become sicker, and need the emergency room — a place that delivers costly care.

“She was constantly in my ear about how these programs really could be much more effective if they recognized that the populations that we were treating needed to have a different type of engagement with the healthcare system,” Turnage said.

Fitzpatrick, who had already been thinking about starting her business to address these very issues, ended up going for it.

From speaking to people in different DC neighborhoods, she now understands even more about what created the disconnect for patients. The healthcare system is too complex, she said. People avoid seeking care when they don’t understand how their insurance works or don’t know what questions to ask their doctors. And doctors often use terms patients don’t understand.

On top of that, Fitzpatrick said, Black patients avoid care after facing negative experiences in healthcare.

“They feel dismissed, unheard, disbelieved, or disrespected,” she said. “And that’s why the trust is broken.”

When she’s not doing outreach, Fitzpatrick is seeing patients over phone, video, and home visits. Like many doctor’s offices, Fitzpatrick had to shut hers down during the pandemic’s stay-at-home orders. She also teaches at George Washington University’s medical school and lectures for its public health school.

Read more: There’s a billion-dollar fight brewing over whether doctors should be paid for phone calls and video visits. Who wins could determine the future of healthcare.

The goal for Grapevine is to get people correct information in easily accessible ways, including face-to-face in their neighborhoods, over podcasts, social media, and through a series of videos they’ll be able to watch and interact with on their phones.

Next, Grapevine will work in assisted housing units for more information-gathering and to provide education and testing for the coronavirus, as well as other health screenings.

“Sometimes as healthcare providers we just assume that there’s a certain level of knowledge over one’s health and that’s not true,” said Yeagley, who will be working on the assisted housing project. “People really do need kind of the basics.”

Fitzpatrick thinks eventually Grapevine’s business model will rest on contracting with health plans. Grapevine will help them save money by giving patients access to health information so they can avoid unnecessary trips to the emergency room and curb hospitalizations that are avoidable.

A 2019 talk put Fitzpatrick on the Biden campaign’s radar

About a year ago, Fitzpatrick gave a presentation at the Aspen Ideas Festival about founding Grapevine and moving to one of DC’s poorest neighborhoods.

She shared the answer she’d found for why 60% of Medicaid patients missed their appointments: “trauma, distrust, and low health literacy.” The healthcare system was failing the most vulnerable, she said, and must focus on these factors.

Jennings was in the audience.

He called Turnage to get more information about her. Turnage, who’d been Sen. Tim Kaine’s chief of staff when he was governor of Virginia, had his own experience working on the campaign circuit. Turnage had been tapped to lead the vice president’s transition team should then-Democratic presidential nominee Hillary Clinton and her running mate, Kaine, win the 2016 election.

When Jennings called him, it had been less than a year since Fitzpatrick left DC Medicaid.

“Oh wow you grabbed a gem,” Turnage recalled saying to Jennings, calling her “just what they would need.”

Fitzpatrick, he said, would help the team understand important issues that are often overlooked by people who set policy but aren’t involved in its day-to-day implementation.

Turnage said Fitzpatrick later came to him for advice when she was considering the position for the campaign. He told her he hoped she would take it but warned the role would require patience.

“Those national campaigns are bureaucracies unto themselves,” Turnage said. “There’s a lot of internal jockeying and competition and things that she just really would have very little patience for.”

If she could look past that, he told her, then he thought her skills would be valuable in helping the campaign develop its healthcare platform.

By May 2020 she was onboard as a co-chair alongside Jennings.

The others on the health team — all of whom serve as volunteers — are Dr. Vivek Murthy, the Obama administration’s surgeon general; Jack Markell, Delaware’s former governor; and Dr. Rebekah Gee, CEO of Health Care Services for LSU Health in New Orleans who previously was Louisiana’s health secretary.

Read more: These are the most powerful people advising Joe Biden and Kamala Harris on healthcare as they take on Trump

The Biden campaign didn’t respond to questions about how the committee works. According to a person directly familiar with the process, co-chairs get input from hundreds of people across different policy areas, whether it be on insurance, science and technology, or public health.

They digest the ideas and decide which ones reflect the values and already-established pledges of the campaign. They present policy details to Larry Strickling, who oversees all the different committees. The campaign makes the final cut, crafting official positions and promises.

Including new voices in healthcare

Fitzpatrick’s time spent in DC’s Anacostia neighborhood is informing her approach to healthcare business and policy.

For instance, that afternoon in July, when Fitzpatrick asks one man walking by whether he wants a mask, he shoots back: “There are a lot of other things that are going to kill me. I’m not worried about coronavirus.”

“I’m not here to judge that,” she tells Business Insider. “I’m here to take that in and listen so that I understand the perspectives, because maybe there is a way we can build messaging around that.”

She hopes that, over time, people will start to trust Grapevine and follow its advice, including wearing a mask and getting the vaccine once it’s available. She wants the voices of the people she speaks with to shape healthcare.

“I think those perspectives need to be in the board room and at the conference table when we’re thinking of all these policies,” she said. “That’s why I do it.”