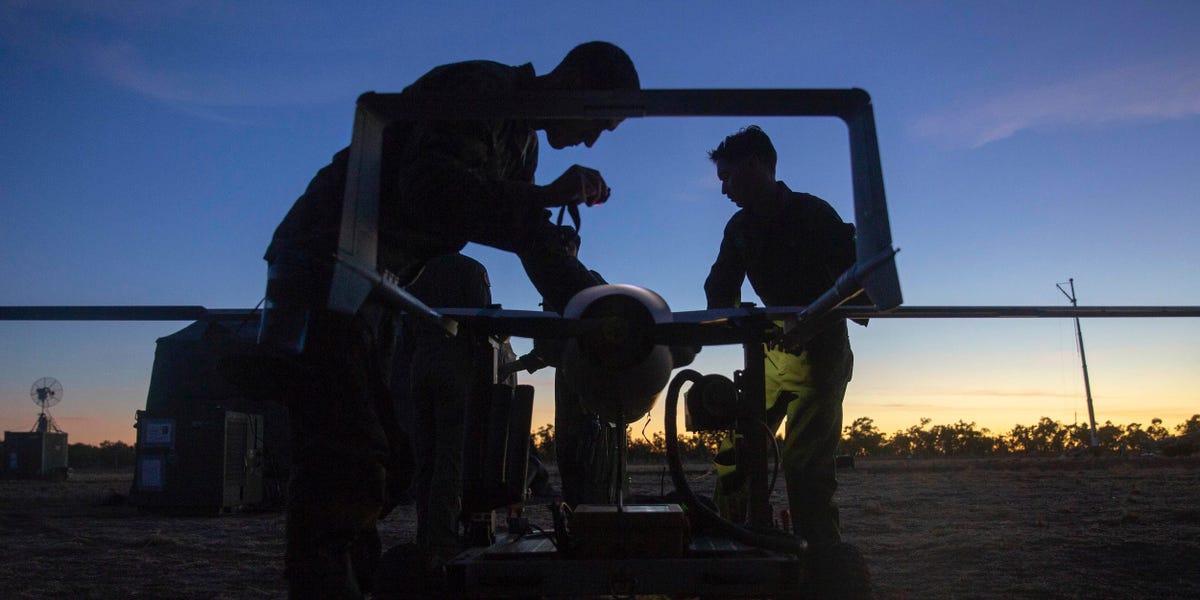 A US Marine Corps RQ-21A Blackjack was flown for the first time in Australia as part of the annual Marine Rotational Force—Darwin on August 8.

Marine Unmanned Arial Vehicle Squadron 3, MRF-D’s Air Combat Element, launched the surveillance aircraft in support of bilateral training between the US and Australian Defence Forces, marking a series of firsts for the Hawaii-based unit.

“This is the RQ-21A’s first deployment since we declared the squadron [fully operational]. It’s very exciting for us” said US Marine Corps 1st Lt. Trevor Ellingson, an unmanned aircraft systems officer with VMU-3.

This historical milestone comes in the midst of an unusual year for MRF-D.

In order to ensure health and safety of Australians and US service members amid the COVID-19 pandemic, the rotation was delayed by two months, reduced from 2,500 Marines to just over 1,000, and saw the ACE, which was originally composed of several squadrons of manned aircraft including MV-22 Ospreys, reduced to just 32 Marines.

In line with these future operating concepts, Ellingson explained that the unit, “didn’t bring a lot of manpower. We made our detachment as small as possible to get the mission accomplished. Out here, we’re training to be fast, agile, to be able to setup, get a bird in the sky as fast as we can, and teardown quickly.”

In a real-world mission, Marine Air Ground Task Force elements would be swiftly and secretly deployed within striking distance of adversaries. These small teams would provide specific mission-tailored capabilities in order to shape the battlefield for follow-on and larger naval forces.

The RQ-21 provides a very unique enabling capability within distributed operations. The aircraft can be rapidly deployed with a limited footprint and provide anything from route reconnaissance and target confirmation to intelligence collection for both unilateral and multilateral operations. These capabilities are amplified by the system’s ability to extend its flight distance using spoke sites as a way of extending the hub site’s reach.

“The spoke site, which enables UAS operators to fly the aircraft conveniently from the rear of a Humvee, also extends the range of the aircraft up to 150 nautical miles from the hub,” said 1st Lt. Matthew Tatarka-Brown, a UAS officer.

During a timed training event, the Marines were challenged to deploy from the hub location and establish a spoke site. All the necessary equipment for the spoke fit snugly into two high back Humvees.

“I lead a small group of Marines in detaching from the main body to setup the spoke site,” said Tatarka-Brown. “We got it up within an hour and ten minutes, but we’re always aiming to get it up quicker.”

The RQ-21 is a valuable source of accurate, real-time intelligence to the United States and allies such as Australia.

Tatarka-Brown explained that the spoke site is extremely valuable because “it’s self-sufficient for a short period of time. It gives us the ability to have multiple aircraft doing separate missions simultaneously within the area of operations.”

To test this concept, the ACE also pushed live video from the spoke-operated RQ-21 to MRF-D’s Command Element, being the first Marines ever to do so through the Stingray Satellite Communications system.

“We’re able to be that eye in the sky for long periods of time, providing battlefield situational awareness, pattern of life, whatever our joint force commander is looking for,” said Ellingson.

The ACE will continue training with their US and Australian counterparts into October, when the MRF–D 2020 rotation will culminate. There’s no saying exactly how or when they’ll need to put their training into practice, but when they do, they’ll be postured and ready to execute.