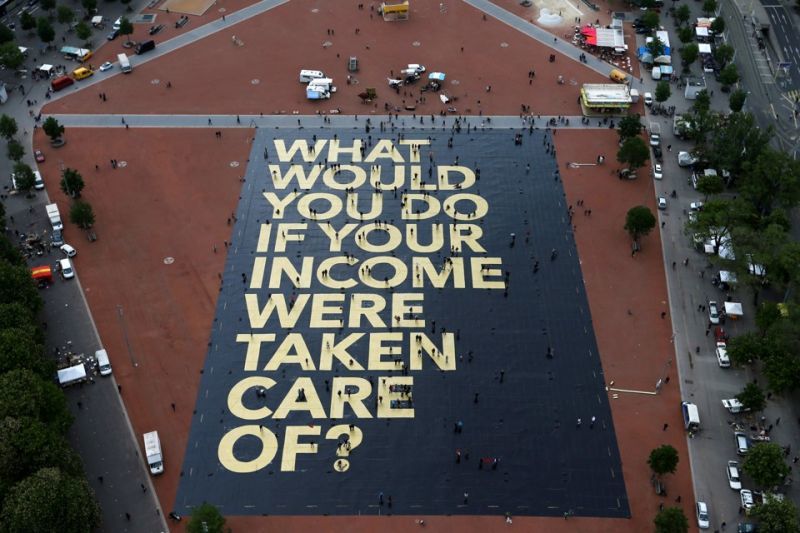 As support for guaranteed or universal basic income grows across America, a recent survey from the Pew Research Center says a majority of black and Hispanic Americans support monthly $1,000 payments from the federal government for all adult citizens regardless of work status. Most white Americans don’t back it.

The survey of 11,001 U.S. adults, which was conducted online between July 27 and Aug. 2, showed that a slim majority (54% of Americans) overall oppose UBI payments. The opposition was concentrated among white Americans, Republicans, upper and middle income households and older adult Americans.

Some 73% of black Americans and 63% of Hispanic adults support the idea of UBI from the government compared with just 35% of white adults.

As the coronavirus pandemic continues to take lives and disrupt economies in the United States and around the world, some groups argue that giving Americans a guaranteed income, which was a major platform issue for former Democratic presidential candidate Andrew Yang, has become necessary.

“We have people in our community who work 60 hours a week and still scrape by to feed their children and pay their rent,” Mayor Melvin Carter of St. Paul, Minnesota, who supports UBI as a simple, scalable and equitable solution for families and local economies, told NBC News. “Whole neighborhoods that are in deep poverty and doing the best they can.”

In June, a coalition of 16 city leaders from across the country led by Mayor Michael Tubbs of Stockton, California, launched Mayors for Guaranteed Income.

“Economic insecurity isn’t a new challenge or a partisan issue. Wealth and income inequality, which have long plagued our country, continue to grow. Even prior to the pandemic, people who were working two and three jobs still couldn’t afford basic necessities. COVID-19 has only further exposed the economic fragility of most American households, and has disproportionately impacted Black and Brown people,” the website explains. “This is our New Deal moment: everyone deserves an income floor through a guaranteed income.”

In the Pew survey, younger adults in both the Republican and Democrat parties and those with lower incomes expressed higher levels of support for the federal government providing a UBI for all adult citizens.

The top 7 stories of the day, curated just for you!
Delivery: Weekdays

In his 2018 book, The War on Normal People, Yang, who founded Venture for America, an organization that helps entrepreneurs create jobs in cities like Baltimore, Detroit, Pittsburgh, and Cleveland, argued that “normal” Americans who represent a majority of the population would be vulnerable to unemployment due to increased displacement from jobs by automation and technological advances.

To prevent the inevitable “widespread squalor, despair, and violence” that would result from millions of workers being permanently displaced by technology, Yang suggested a UBI of $1,000 a month.

The call for UBI in the wake of the coronavirus pandemic isn’t just limited to the U.S. Kanni Wignaraja, United Nations assistant secretary-general and UNDP regional director for Asia and the Pacific, suggested last month that global governments should offer citizens UBI as part of a strategic sustainable economic policy.

“It is time to add a new element to the policy packages that governments are introducing, one we know but have abandoned: Universal Basic Income (UBI). It is needed as part of the package that will help us to get out of this yawning pit,” she wrote.

“The naysayers, and there are plenty, will point out that it won’t work because no country can afford to regularly dole out money to every citizen. They will argue that we will run unsustainable deficits, which cannot be financed.

“This is a valid concern. But the alternative will result in a greater surge in inequality, increasing social tensions that would cost governments even more and open countries to heightened risk of societal conflict.”

On Wednesday, the Times of London reported that Germany launched that country’s first systematic experiment with an unconditional UBI in which a group of 120 people will each receive just over $1,400 monthly for three years to put them just above the poverty line. The experiment is being funded by about 140,000 private donors.

The group will track their attitude and behavior change through regular surveys.

“So far the debate has resembled a philosophical salon at best, and a religious war at worst,” Jurgen Schupp, who will lead the study, according to German outlet Der Spiegel.

“On both sides, it is characterized by clichés: critics claim a basic income would make people stop working and lie on the couch with fast food and streaming services. Supporters say people would carry on with meaningful work, become more creative and pro-social, and rescue democracy.”

Some 90% of the participants in the study have opted to continue working.