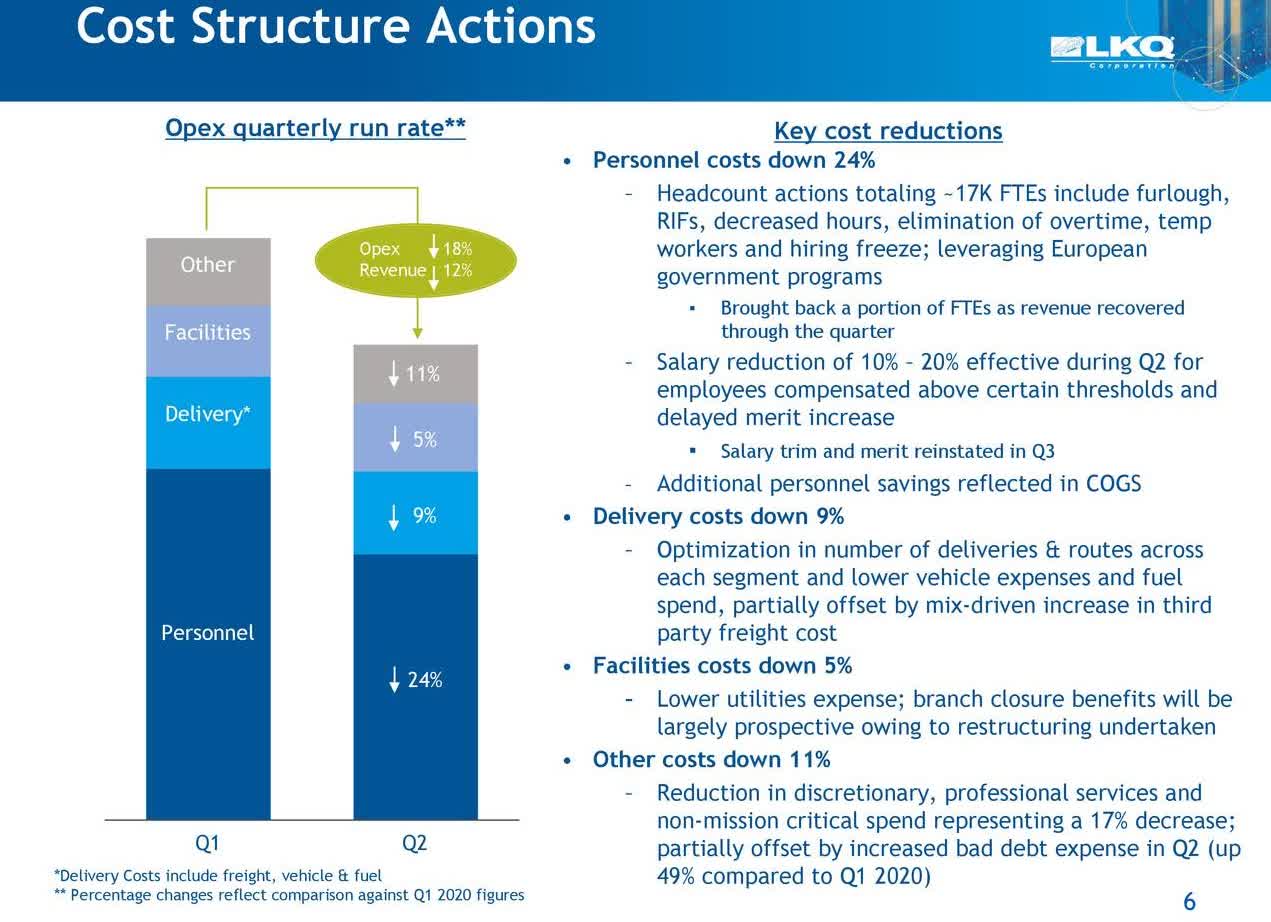 LKQ Corporation (LKQ) second-quarter results came in better than expected. The company’s cost alignment strategy, which began even before COVID-19, is paying dividends, as profit margins remain strong even in light of a 19% decline in sales for the quarter. The company also generated an impressive amount of FCF during the quarter, which was the result of reduced inventory and collection of accounts receivables. Management decided to use a good portion of the FCF generated to pay down debt.

We like the long-term prospects for LKQ and remain bullish on the company. We believe the company still has room to expand margins once their profit optimization strategy in Europe (called 1 LKQ Europe) starts kicking in. The company had to put a hold on that program in order to concentrate resources to weather the COVID storm. Management stated on their conference call their plan to restart 1 LKQ Europe during their third quarter.

LKQ’s stock has rebounded from the March market sell-off. The firm is trading at a TTM PE multiple of 17x and at a forward PE multiple of 14x. LKQ’s 5-year average PE multiple stands at 20x. Currently, analysts are expecting EPS for 2021 of $2.38. Applying a 20x multiple to expected 2021 EPS gives us a fair value estimate of $47 per share or a potential upside of 53%. We believe the combination of higher volumes coupled with a lower cost structure, thus expanding margins, to be the catalyst for the market to re-rate LKQ at its historical multiple. We remain bullish on LKQ.

With shelter-in-place orders still in place during their second quarter, it was not surprising to see miles driven drop precipitously, as vehicle usage declined. That caused revenues for LKQ to drop by 19% for their second quarter compared to their prior-year period as activity in repair shops and demand for spare parts declined severely. However, the company did perform better than expected, beating sales expectations by $200M and beating EPS expectations by a wide margin, reporting EPS of $0.39 while the market was expecting EPS of $0.10 for the quarter, reflecting the benefits of their cost reduction programs.

We believe the better-than-expected top-line comes from the relatively positive impact of COVID-19, which disrupted small competitors and OEMs, many of which have a replacement parts business line:

“The continued outperformance of our North American organic growth relative to repairable claims growth combined with the OE supply chain disruptions in dealer closures during the quarter give us confidence that APU is increasing and we are gaining market share.” – Q2 call

The management team also stated during their conference call that according to CCC, collision and liability-related repairable claims in the second quarter were down 42%, while parts and services sales for LKQ’s North American segment declined by 22.5%, pointing to outperformance by LKQ and a good reason for their market share gain. While we don’t expect continued outperformance, as OEMs supply chains come back online, we believe market share gains for the quarter has given LKQ a good chance for increased customer captivity, as new customers could stay with LKQ on a longer term due to their high fulfillment rates and heavy discounts to OEM parts.

Miles driven is still low in Europe but rebounding in N.A.

Management is seeing sequential month-to-month improvement in operating results, with the first-half in April being the lowest point in demand. April saw a 30% same-day revenue decline compared to 2019, while May was down 13% and June down less than 8% on a comparable basis.

Miles driven in April were down 40% according to the U.S Department of Transportation and as cited by management during their conference call. That trend improved to 26% by May and management expects a 10% decline in June. During the great recession of ’08-’09, miles driven dropped by only 3.9%, which gives good context into the severity of the COVID-19 pandemic.

In Europe, the rebound in miles driven is still lagging that of their North American counterpart. For example, management said that according to INRIX, a leading traffic analytics data provider, 10 out of the 19 countries analyzed by the third-party analytics company got to pre-COVID levels of travel by mid-June. However, countries that were severely hit by the pandemic are still seeing very low levels of miles driven. Such is the case in Italy, which, at the height of the pandemic, saw a decrease in miles driven by 76% relative to pre-COVID levels. Since then, that number showed an average weekly growth rate of 14% but slowed to just 8% weekly growth in June. That said, the U.K. has seen the slowest recovery in miles driven, which is still 67% below pre-COVID levels.

While in the short term a reduced number of miles driven is going to take a toll on repair shops and spare parts, the European Automobile Manufacturers’ Association is now projecting a decrease in new passenger car registrations by 25% or a decrease of 3M new car sales. Management believes, in the long term, the auto industry’s economic crisis due to COVID-19 would benefit LKQ:

“These massive declines in new car sales will eventually lead to an older car park which favors the aftermarket parts industry and will ultimately be good for LKQ.” – Q2 call

What’s next for LKQ

Management still feels the worst is not over yet and gave a warning sign during their conference call by giving the following commentary:

“That said, the pace of improvement has slowed materially, and progress in the first few weeks of July has stalled as we have experienced slight revenue declines on a week-over-week basis. Here in the United States, the uptick in positive test results in many states, including Florida, Texas and California, has prompted reversals of several economic reopening plans and even cities that have managed to suppress the virus are taking precautions. Those reversals, including widespread decisions to move forward with virtual schooling, could negatively impact mobility and put pressure on our ability to attract adequate labor.” – Q2 call

However, they are focusing on efforts mostly related to profitability initiatives, which, as shown by their second-quarter results, is working for them. There are three main areas to take costs out which include: personal-related cost actions, variable cost reductions to match lower revenues, and other cost reductions such as route and branch consolidations. The company estimates cost reductions of $80M to $90M if sales drop by 40% to 45%: 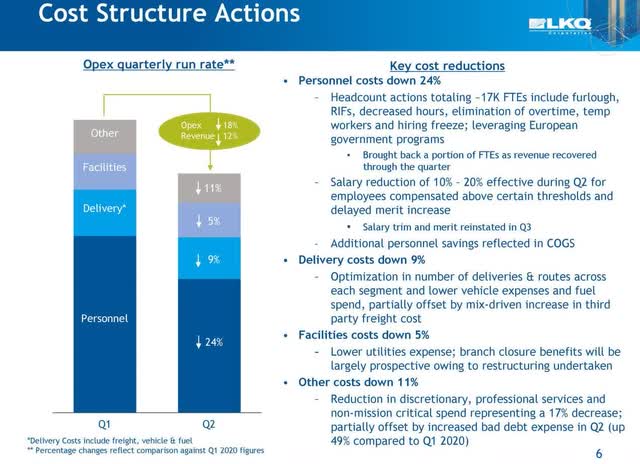 Actions taken during the quarter to realign their cost structure can be noticed by their strong margin performance, keeping in mind the severe decline in revenues during the period:

Management is also optimistic about the restart of its 1 LKQ Europe restructuring program. The pandemic has shifted the timing of the long-term benefits expected out of the program, which includes 300 basis points in margin improvement. That would give them a long-term EBITDA target of 11% for their European market. Considering that their European operations (46.4% of total sales) are bigger than their North American market (41.6%), an improvement in EBITDA margins to 11% could be highly accretive to EPS. At the end of 2019, their segment EBITDA profile was the following:

The high degree of FCF generated by LKQ during their second quarter has lowered the financial risk profile of the company. Management used the FCF generated during the quarter to pay down debt, lowering their net leverage ratio to 2.2x, which puts them in a comfortable position with their debt covenants that requires them to maintain a net leverage ratio below 5x. The company’s main capital allocation decision is the continuation of debt repayment.

The company’s decision to keep working on its cost structure could surprise the Street once they report third-quarter results. We believe the company should benefit from such cost reductions in the long term, which, once volumes come back to “normalize” levels, could be highly accretive to EPS due to operating leverage.

With that said, LKQ’s income statement already shows some positive highlights, such as the reduction in SG&A and a decrease in interest expense: 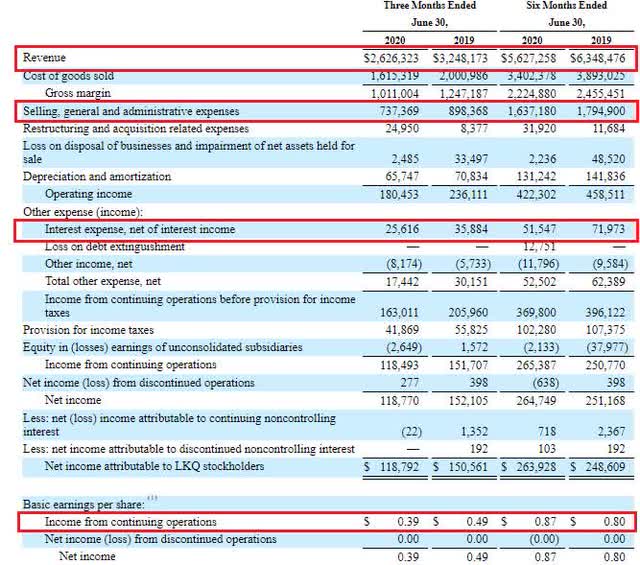 Once the market realizes that LKQ’s restructuring program is bringing back growth to EPS, we believe an earnings multiple re-rate back to its historical 5-year average of 20x could play out. With EPS of $2.38 expected for 2021, applying a 20x earnings multiple gives us a fair value estimate of $47.6 per share for LKQ. With shares recently trading at $31.5, there is a potential upside of 53%.

We remain bullish on LKQ.

Disclosure: I/we have no positions in any stocks mentioned, but may initiate a long position in LKQ over the next 72 hours. I wrote this article myself, and it expresses my own opinions. I am not receiving compensation for it (other than from Seeking Alpha). I have no business relationship with any company whose stock is mentioned in this article.

2020-08-23
Previous Post: GST registration can be obtained in 3 days through Aadhaar authentication
Next Post: What to know in the week ahead