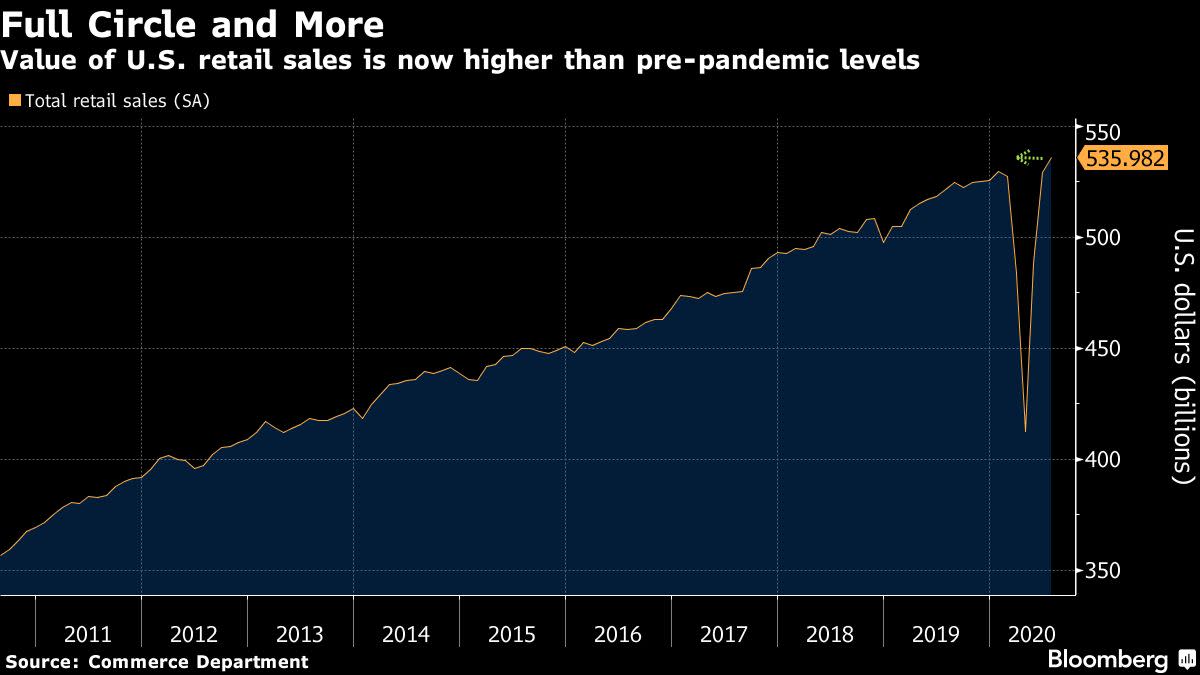 (Bloomberg) — On the surface the rebound in U.S. retail sales is a V-shaped recovery, but the overall figure obscures lingering economic pain across many of America’s businesses.

After a third straight monthly increase, albeit a weaker gain than expected, the total value of U.S. retail sales has rebounded above pre-pandemic levels. But the composition of spending looks substantially different than it did at the start of the year. Gains in online sales and at grocery stores mask the fact that certain sectors — like restaurants and bars and clothing outlets — are far from fully recovered.

“Where we’re buying from is a bit different, but we’re actually at some pretty strong numbers now,” said Stephen Gallagher, chief U.S. economist at Societe Generale SA. “Travel, eating out, sporting events, a lot of entertainment events — all that is going to be struggling for quite some time.”

The figures highlight a rebound in consumer spending that will help the economy dig out from its worst quarterly performance since the 1940s, even if the pickup in activity fails to extend to all retailers. While receipts at restaurants, department stores and clothing merchants remain below year-ago levels — and closures and job cuts have hit such establishments hard — those categories account for about 15% of overall retail sales.

The outlook for consumer spending in coming months remains murky, though. The extra $600 in weekly jobless benefits that have propped up incomes and spending for millions of unemployed people in recent months expired at the end of July, and lawmakers have been in a stalemate over another aid package.

A separate report Friday showed consumer sentiment remained weak in August, increasing slightly from July but little improved from April’s pandemic low. In addition, total consumer outlays — which includes spending on goods and services — have yet to fully recover.

The Commerce Department’s report on Friday showed retail sales increased 1.2% from the prior month after an upwardly revised 8.4% gain in June. The monthly slowdown reflected declines at motor-vehicle dealers and building materials outlets, along with weaker gains at restaurants and clothing stores.

Nine of 13 major categories rose, with the biggest increase coming at electronics and appliance stores. Such sales jumped 22.9% following a 37.6% gain in June, possibly reflecting changing consumer habits such as more Americans working and learning from home. Receipts at sporting goods and hobby stores fell 5% from the prior month, after June’s 27.6% rise.

The S&P 500 stock index fluctuated between gains and losses on Friday, lingering near a record high.

“For consumer goods spending, the recovery is over — spending levels are back to record highs,” Wells Fargo & Co. economists Tim Quinlan and Shannon Seery said in a note. But “keep in mind that for the overall economy, outlays on services are roughly twice as large as goods and the recovery in services has been slower.”

President Donald Trump — who trails Democratic challenger Joe Biden in recent polls — signed an executive action last week authorizing an additional $300-a-week federal top-up for those receiving at least $100 in other jobless benefits, but it’s not clear when jobless workers will begin to see those supplemental payments. He also allowed for a four-month deferral of payroll taxes, which would potentially give workers more spending power, but there are questions over whether employers will go along and whether they’ll have to pay it back later.

Most importantly, the U.S. has yet to get the virus under control, though the spread has ebbed slightly in the last couple of weeks. Several Federal Reserve officials have reiterated the virus’ role in the economic recovery recently, including San Francisco Fed President Mary Daly, who said Wednesday: “The virus determines the pace of our recovery. That’s the main message: uncertainty is before us.”

A separate report out Friday from the Federal Reserve showed total output at factories, mines and utilities rose 3% in July from the prior month, in line with projections, as a surge in motor vehicle production and unusually warm temperatures boosted the overall figure.

“The economy is showing some good resiliency despite the high numbers of Covid cases,” Michael Gapen, Barclays Plc’s chief U.S. economist, said on Bloomberg Television. “I think that can continue but I think it needs some additional federal support to do that.”

2020-08-16
Previous Post: General Electric Has Had Setbacks, But GE Stock Is Likely to Rise
Next Post: If ‘Fortnite’ Stands Its Ground Against Apple And Google, Epic Could Lose A Ton Of Money