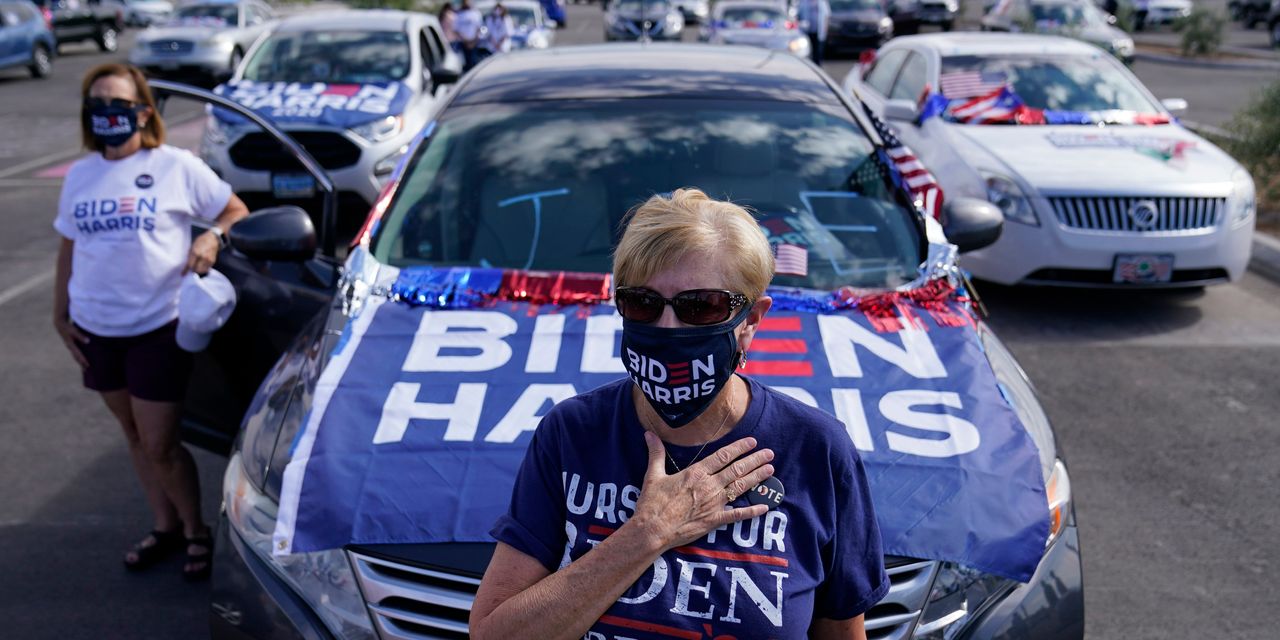 Bigger deficits can push yields higher for two reasons: first, by increasing the supply of outstanding bonds as the government ramps up borrowing and, second, by potentially boosting economic growth and inflation, which makes bonds less attractive.

The improving poll numbers for Democrats in November dovetailed last week with renewed discussion in Washington about another round of coronavirus relief aid before the election. That gave investors a double-dose of stimulus hopes, though prospects of a pre-election bill appeared to dim over the weekend.

As of Friday, the yield benchmark 10-year U.S. Treasury note stood at 0.775%, up from 0.644% before the presidential debate on Sept 29. The yield on the 30-year bond has climbed even more to 1.573% from 1.404%. But some investors see room for a bigger rise, which could have repercussions on other assets like stocks and gold that have benefited from ultralow yields.

For investors, “this election is about the implication for fiscal policy,” said Thanos Bardas, global co-head of investment grade at Neuberger Berman. The 10-year yield, he added, could in time “go to 1.3% easily on a full sweep” by Democrats.

Investors can’t take any scenario for granted. In 2016, few predicted Mr. Trump’s victory or how the market would respond. This time, polls suggest that Republicans could hold on to the Senate even if they lose the White House, a potential recipe for legislative gridlock. Any number of other events, such as the approval of a coronavirus vaccine or a marked slowdown in the economic recovery, could also diminish the importance of the election.

Mr. Bardas, for one, said his team wasn’t making any big bets on the path of Treasury yields, in part because investors could pile into bonds if the outcome of the election is contested or uncertain.

A sustained move higher in Treasury yields could be difficult to achieve. Not only is the economy suffering due to the pandemic, but its average growth rate outside of recessions has declined in recent decades. At the same time, inflation has remained stuck below the Federal Reserve’s 2% annual target. As a result, investors widely expect the central bank to hold short-term interest rates near zero for years and to keep buying Treasurys—both policies that should constrain longer-term yields.

When Republicans captured the Congress and the White House in 2016, the 10-year yield stood at around 1.9%. It quickly rose to 2.6%, lifted by expectations that the Republican-controlled Congress would try to lift economic growth by slashing regulations, cutting taxes and boosting infrastructure spending.

Ultimately, Mr. Trump did sign a tax cut estimated to cost nearly $2 trillion over 10 years, though not a major infrastructure bill. The 10-year yield subsequently reached as high as 3.2% before declining as global growth slowed and the Fed started cutting interest rates.

Mr. Biden’s platform doesn’t signal as dramatic a selloff in bonds, analysts said. Among other things, he has called for raising taxes on corporations, which could drag on stocks and increase the appeal of bonds. Still, estimates of his spending proposals in areas such as health care and renewable energy infrastructure total trillions of dollars more than his tax increases. If Democrats win Congress and the White House, it is also likely that they would pass additional coronavirus aid.

Despite all the forces pushing down on yields, analysts say that deficits still matter for the bond market. Earlier this year, emergency coronavirus legislation was funded primarily through the issuance of short-term Treasury bills with maturities of one year or less. By August, though, the Treasury Department was ramping up issuance of longer-term debt, widening the gap between short- and long-term yields and sparking selloffs heading into debt auctions.

“It’s become very clear in the last three or four months that the bigger supply especially at the longer end of the curve necessitates [a] market concession,” said Thomas Simons, money-market economist in the Fixed Income Group at Jefferies LLC.

If Democrats sweep, the prospect of even larger debt auctions will likely push yields higher, said John Briggs, head of strategy for the Americas at NatWest Markets. In addition, just a small shift in growth and inflation expectations could put added pressure on the market as investors re-evaluate the chances that the Fed will raise interest rates over the next several years.

“You don’t have to have the market price in a rate hike,” Mr. Briggs said. “It just has to start pricing in the probability of some chance of a rate hike, which we don’t have now for so many years.”