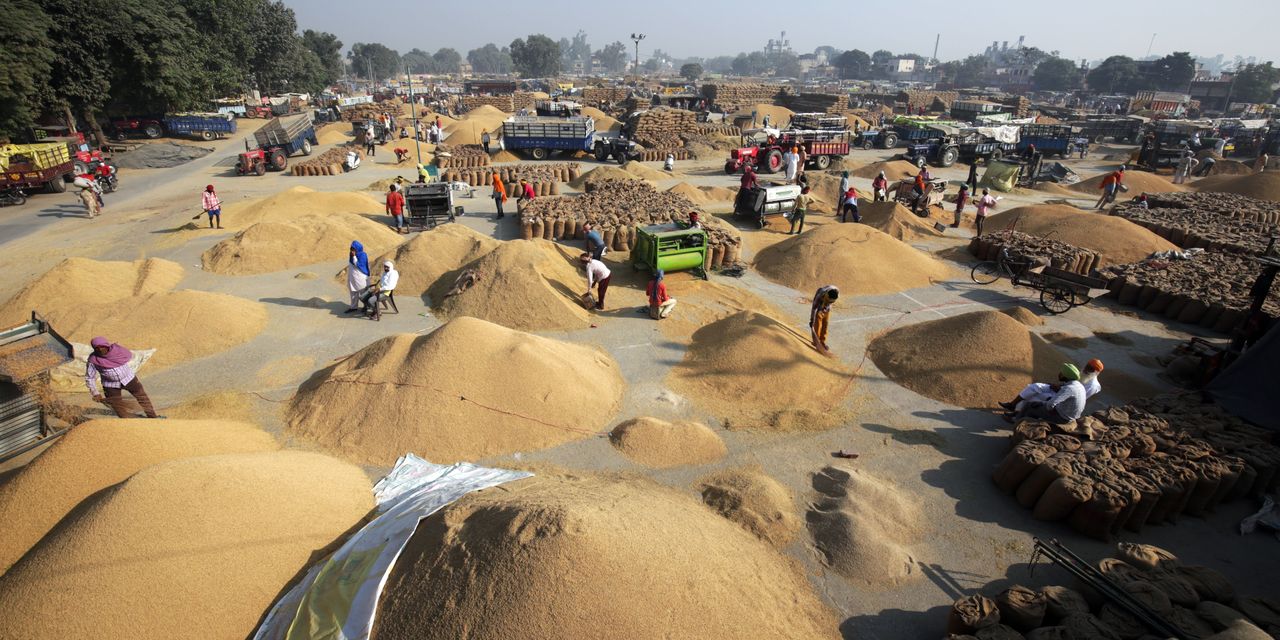 NEW DELHI—With India facing an economic crisis brought on by the coronavirus pandemic, Prime Minister Narendra Modi is looking to deregulation as the cure.

The changes pushed through in recent weeks by his Bharatiya Janata Party, affecting everything from factory floors to farming, have so far led to more confusion than acclaim, but economists say the economic overhaul could ultimately improve India’s troubled growth prospects.

“The reforms are in the right direction. They are bold steps,” said Ashok Gulati, an Indian agricultural economist and professor at the Indian Council for Research on International Economic Relations.

India’s economic growth was slowing alarmingly even before the pandemic abruptly threw it into reverse, starting in March. In the months that followed, the economy contracted by almost one-quarter, the sharpest blow suffered by any of the world’s largest economies during the coronavirus-induced downturns.

The poor have been particularly hard hit, as workers who had migrated to cities to support families in rural areas returned home when those jobs disappeared. With many returning to farming, they now depend more than ever on India’s heavily regulated agricultural economy.

Mr. Modi, whose government’s perilous financial state has left few options for addressing the crisis, pushed through a grab bag of dramatic regulatory changes last month with little warning and no debate in Parliament. In a voice vote—obscured by technical glitches with the public broadcast of the proceeding that made it difficult to determine which parliamentarians actually supported the measures—the BJP passed a flurry of politically difficult changes.

In a single swoop, it dismantled a longstanding regulatory system that forced farmers to sell most of their crops through government-approved wholesale markets dominated by traders and middlemen instead of directly to consumers or food processors.

Then the BJP passed a series of new labor measures that increased the number of companies that can fire workers without government permission, raised the barriers for workers to unionize, relaxed rules preventing women from working night shifts and restricted unions’ ability to organize strikes. At the same time, it expanded the country’s social security program to include many contract workers.

Jitendra Singh, a minister in the BJP government, said the changes would ultimately improve farmers’ economic prospects, especially in far-flung rural areas, by giving them more options for selling their crops. The BJP has also said it doesn’t intend to phase out government wholesale markets or minimum price supports.

The agricultural industry overhaul went into effect immediately, while most of the labor-market changes will be implemented before the end of the year.

More on India and Covid-19

The measures add to a mixed record of economic changes by Mr. Modi and the BJP. The prime minister’s controversial 2016 move to instantly remove almost 90% of the country’s currency in circulation hobbled the economy for years with little benefit to show for it, economists say. Overhauls of the country’s bankruptcy code and the country’s tax system have been broadly applauded, despite complaints about how they have been implemented.

The latest changes have sparked an uproar, including from opposition parties that once promoted the very same policies and even from farmers who are supposed to be the main beneficiaries.

Government-approved wholesale markets have largely shut or slowed sales as the traders and middlemen who dominate them protest against the prospect of new competition. Small farmers, who suddenly have no place to sell their products until other buyers step up, have also erupted in protest. They fear the government will eventually phase out a system of guaranteed price floors for some crops, leaving them little leverage in dealing directly with large-scale buyers.

“Eventually, they will dictate prices,” said Raju Kumar, a 32-year-old farmer, who grows rice on his 2-acre plot in a village in the state of Rajasthan. “It is almost like leaving the sheep before the wolf.”

Meanwhile, workers’ unions are up in arms, as well, vowing to start a nationwide general strike next month before the labor measures—which one large central union says “impose conditions of virtual slavery on workers”—go into effect.

Economists say the changes could ultimately be a boon for the Indian economy, which depends heavily on agriculture. Farming accounts for about 17% of total income in the country, and provides employment for close to two-thirds of India’s working-age population.

The daunting challenge may be implementing them during a double-barreled economic and health crisis—even though the desperation of the country’s economic state is what finally cleared a political path for an initiative both the BJP and its main opposition have at times supported.

“In a word, all reforms are good in theory,” said Vivek Dehejia, an expert on the Indian economy at Carleton University in Ottawa, Canada. “In practice, I worry it may be too little too late, and I’m not confident that market incentives work well during a time of a public safety emergency.”

If the changes can be maintained long enough for legions of traders and middlemen entrenched by the government-created monopoly wholesale markets to be replaced by competitive markets, then farmers should ultimately benefit by capturing at least some of the profits that have traditionally gone to those buying and reselling their crops, said Shubho Roy, an economist at the University of Chicago who has studied the wholesale market system.

Do you think the recently adopted changes will improve prospects for India’s flagging economy? Why or why not? Join the conversation below.

The new laws, for example, allow for the first time for many crops to be stored and sold later, eliminating restrictions that contributed to the spoilage of as much as one-third of some crops. That along with the elimination of the monopoly wholesale markets should encourage food processors to purchase goods directly from farmers or farmer cooperatives. Other companies are already planning new businesses that would purchase produce directly from rural farms and deliver them to urban grocers.

“It presents an opportunity to organize agriculture in modern terms,” Mr. Roy said, since the changes upend a system whose foundations go back more than 70 years to India’s founding as a nation. “It attacks a system that has become very corrupt and exploitative.”

—Eric Bellman contributed to this article.